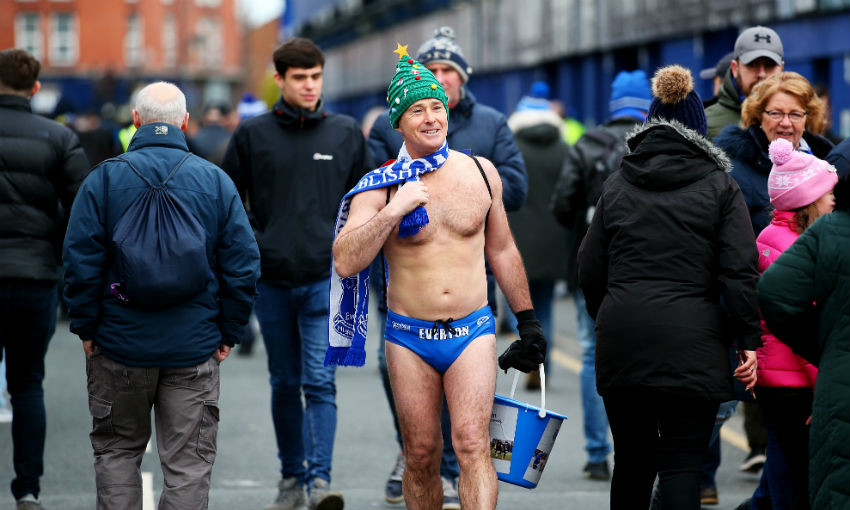 Jordan Henderson hopes Liverpool and Everton supporters can once again come together today to support the fundraising efforts of Speedo Mick.

Mick – real name Michael Cullen, a boyhood Evertonian – is taking a break from his 1,000-mile trek to walk the length of Britain in order to attend this afternoon's FA Cup third-round tie.

The 55-year-old is looking to raise £100,000 for community projects for disadvantaged young people by walking nearly a marathon a day with just Everton-themed swimming briefs for clothing.

In his column in the matchday programme for the Merseyside derby, Henderson expressed his immense amount of respect for Mick and his cause.

The captain writes: "I think I can safely say that one of the most remarkable sights over the Christmas period has been of a bloke walking around in nothing but his swimwear.

"For most at today's game Speedo Mick will need no introduction, but for anyone who isn't aware of who he is and what he does then his name is definitely worth a quick Google.

"I first heard about Mick a couple of years ago, but I don't think I have the words to do him justice. People who are actually from Liverpool tell me he's become a local hero because of the work he does for charity and, given what he's up to at the moment, it's easy to see why.

"Mick's latest escapade is a walk from John O'Groats to Land's End wearing nothing but his trademark Everton swimming trunks and a Santa hat as he looks to raise £100,000 for community projects for local young people.

"His efforts thus far have attracted a lot of media attention and rightly so, because it's bad enough going out without a coat at this time of year, never mind anything else.

"I'm reliably informed that Mick is planning on taking a break from his charity walk so he can be at today's game and if he does make it I hope he gets all the support that he deserves.

"I know he'll be wanting an Everton victory and I'd be the last to wish for that to happen, but it would be great if the two sets of fans could come together as they have so many times in the past to get behind Mick."

Henderson continues: "The rivalry between the two clubs in a footballing sense is obviously a fierce one, and rightly so. Who doesn't love a derby?

"But I have to say, ever since I was lucky enough to come to this city, it's always impressed me how the fans can put that rivalry to one side to come together in solidarity for good causes. I really think it's something the city of Liverpool should be immensely proud of.

"I'm sure Mick will also have his collection bucket out at Anfield this afternoon so hopefully it will be filled and maybe next time we see him he might actually have his clothes on!"

You can donate to Speedo Mick's walk by clicking here.