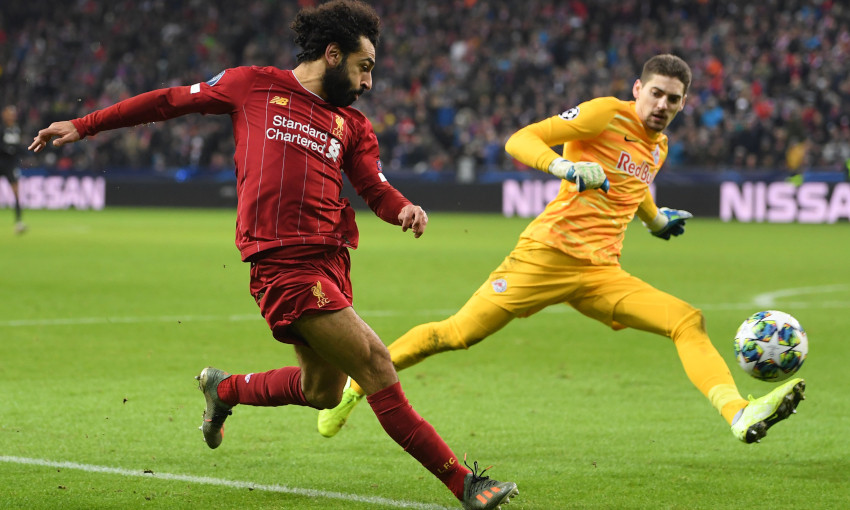 Liverpool's defence of the Champions League will continue into 2020 after an impressive 2-0 win at Salzburg on Tuesday night.

In the final, decisive tie of Group E, the Reds resisted a first-half surge by the home side before striking twice in 100 seconds, through Naby Keita and Mohamed Salah, to secure progress as winners of the section.

For almost an hour, it was not Salah’s night in Austria.

The prolific Egyptian missed two promising chances during a goalless first half and then swept another strike over early in the second, before an attempt to round the goalkeeper failed next.

Within two minutes of Keita’s breakthrough, however, Salah got his goal – and he did so courtesy of a breathtakingly difficult piece of technique.

He latched onto Jordan Henderson’s pass in behind the Salzburg defence and got a touch to round goalkeeper Cican Stankovic as he rushed from his line.

Salah’s momentum carried him to an ever-narrowing angle to the right of the target, one seemingly impossible to score from. Wrong.

A perfectly-judged finish sent the ball arcing inside the far post to put the European champions into an unassailable lead and prompt a catalogue of plaudits for the No.11’s feat.

It was Salah’s 27th Champions League goal involvement since he joined the Reds (19 goals, eight assists), a tally bettered only by Lionel Messi (28) in that time.

At the home of his former club, Keita made it two goals in two starts to accentuate another eye-catching display from Liverpool’s No.8.

A consistent threat with the ball at his feet, whether providing a smart pass or setting off on an incisive dribble, the midfielder again exhibited his timing in the area.

With the score still goalless heading towards the hour mark, Keita found the right spot in the Salzburg box to receive Sadio Mane’s lofted cross and coolly nod home the opener.

It was a crucial blow to the hosts’ hopes of snatching qualification from the Reds, who assumed control for the remainder of the game.

He worked effectively in the other direction, too; among his teammates, only Mane contested more duels than Keita’s 14, while he also made three tackles and one clearance.

“In the beginning we used Naby a little bit on the wing,” explained Jürgen Klopp during his post-match press conference.

At the heart of a Liverpool performance that evolved from determined to dominant was Henderson.

Assured in possession, sharp in the tackle and alert to danger, the skipper embodied the resolve the Reds showed to keep at bay a side who had scored 80 goals in 22 league and European fixtures this season before Tuesday.

His two tackles, two interceptions and 11 possession regains underline his importance in the final result, but there was a fine assist on the night too.

A minute after Keita’s goal, Henderson noticed an opportunity to sweep a long-range pass into the right channel for Salah to chase and from there the forward, as mentioned, did the spectacular rest.

“He is a fantastic player, a fantastic captain. Everyone is looking up to him and he is very important for us,” said Virgil van Dijk post-match.

The No.14 will deservedly lead the holders into the Champions League knockout stages for the third consecutive season.

Liverpool travelled to Salzburg in an unusual situation – leaders of Group E but with the knowledge that defeat at Red Bull Arena would very likely mean elimination.

Once the dust settled on their 2-0 win, though, a glance at the final standings showed Klopp’s men had gained more points than in each of the previous two group-stage campaigns.

Four victories and a draw followed their defeat by Napoli on matchday one, to better their total of nine last term and 12 in 2017-18.

As a group winner, Liverpool will be seeded in Monday’s last-16 draw and paired with a team who finished second in their section.

They cannot, however, face Napoli or a fellow Premier League side in the first knockout round of the competition.

That means there will be five potential opponents for the Reds, definitely including Real Madrid, Borussia Dortmund and Lyon.

In Wednesday night’s matches, Shakhtar Donetsk, Dinamo Zagreb and Atalanta will compete for second place in Group C, while runner-up in Group D is still to be decided between Atletico Madrid and Bayer Leverkusen.