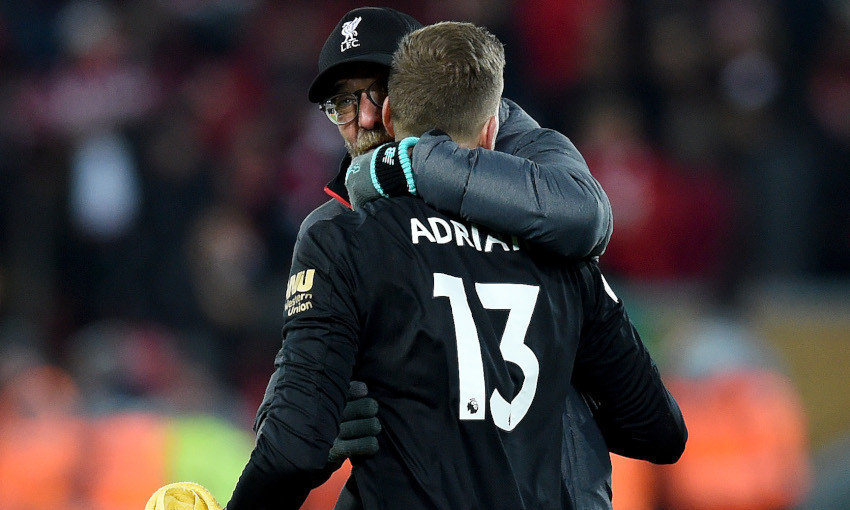 With the scoreline 2-0 in the hosts’ favour, the Spaniard was called from the bench in the 78th minute at Anfield after Alisson Becker had been shown a straight red card for handling outside of the penalty box.

Brighton immediately reduced the arrears from the subsequent free-kick as Lewis Dunk slotted home with a quickly-taken effort; however, Adrian produced a string of saves and crucial interceptions in the final moments to ensure the Reds collected another victory to retain an eight-point lead at the division's summit.

“My man of the match is Adrian, coming on in a game like this and having that knock of the free-kick,” Klopp told reporters after the game.

“I want to read something [in the press] about that situation. It is incredible. An ice-cold 'keeper getting his gloves ready and then… [whistle]. That is our life. Then being in the game to make two saves.

“He saved our lives and I am happy for him he can play the derby.”

With Alisson set to serve a one-match suspension, Adrian will line up between the posts on Wednesday night as Liverpool welcome Everton to Anfield – the first of nine first-team fixtures in December.

“In the period we have now, you have to use your fresh moments, and then in other moments you have to fight, which we did [against Brighton],” said Klopp.

“Recovery starts in your mind, you have to want to recover. We try everything to keep the boys fresh with the right food and treatment to go again in the derby.”