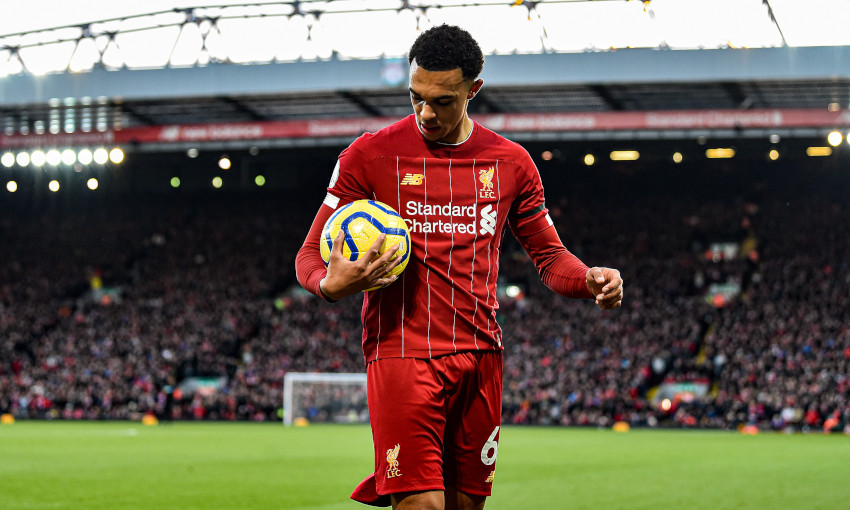 Trent Alexander-Arnold gave insight on Liverpool's strength at attacking set-pieces after setting up both goals in Saturday's win over Brighton and Hove Albion.

The right-back teed up each of Virgil van Dijk’s headers in the Premier League clash, the first from a curling free-kick and the second via a near-post corner.

The Reds have now scored 40 times from set-pieces in the league since the start of last season - the best tally of any team in the division.

From his perspective as a regular taker, Alexander-Arnold feels the aerial ability of his teammates makes each situation a real opportunity - and then it’s on him to get the kick right.

“We’ve got big lads and if we get the delivery right then we’ve got a good chance of scoring goals or at least making the ‘keeper work,” the No.66 told Liverpoolfc.com post-match.

“With the quality we’ve got with the boys and their heading quality, it’s all about the delivery and putting it in areas and timing the runs.

“We know they’ve got a good chance and we’ve done that twice today.”

Van Dijk’s first-half double proved crucial for Liverpool when Brighton set up a challenging final 10 minutes for the league leaders.

Alisson Becker was sent off for handling outside the area and from the free-kick, Lewis Dunk caught the Reds off guard and rolled the ball in.

The home side stood firm for the remainder, though, and not only stretched their advantage at the summit to 11 points, but matched the club record of 31 league games without defeat.

“We haven’t performed the way we wanted to,” said Alexander-Arnold of the match.

“But the run we’re on is really good, we’ve managed to get another three points, which is important. For us, it’s about keeping the momentum up and trying to stretch that run on.

“[It was] a difficult day for us, probably one of the most difficult games we’ve had at Anfield so far this season. They played really well and executed their game plan.

“But we managed to score two set-pieces and that was massive for us. We know how big a three points that was today.”

Alisson’s red card means the Brazilian will be suspended for Wednesday night’s Merseyside derby at Anfield.

Adrian, who took his place in goal for the final quarter-hour against Brighton, is set to deputise as Liverpool look to maintain their lead at the top.

With Adrian already accustomed to the job after a two-month spell in the side earlier in the campaign, Alexander-Arnold expects the team to cope with the disruption when Everton cross Stanley Park.

He added: “We have had setbacks throughout the course of the season, we have had injuries and suspensions. We’ll be looking to Adrian to come in and do a shift for us like he did at the start of the season.

“We’ve all got the trust in him and he knows how good he is as a ‘keeper and how much we need him. So he’ll be raring to go. It’s not too much of a blow when you know you’ve got such a quality ‘keeper waiting in the ranks.”

Alexander-Arnold on PFA Young Player of the Year shortlist