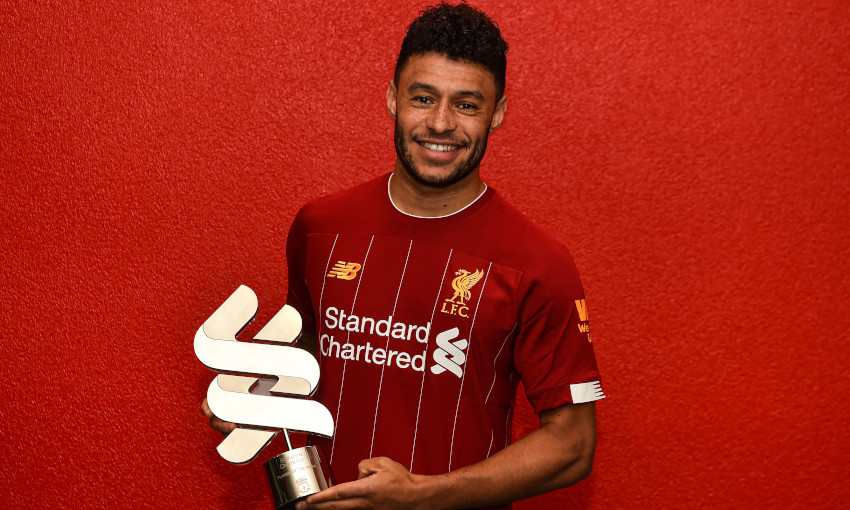 Alex Oxlade-Chamberlain today collected the Standard Chartered Player of the Month award after being voted Liverpool's star man for October by fans.

The midfielder made three appearances during the month and had a significant impact in each one.

Having helped to change the course of the Premier League clash with Manchester United at Old Trafford as a second-half substitute, Oxlade-Chamberlain was the catalyst for an important Champions League victory over Genk.

He opened the scoring in Belgium within two minutes of kick-off and doubled the Reds’ lead after the break with an ingenious, outside-of-the-boot finish from the edge of the area as the visitors won 4-1.

Oxlade-Chamberlain produced another stunning goal a week later, lashing in a dipping effort past his former club Arsenal during the Carabao Cup thriller at Anfield.

The No.15 received the most votes in our Player of the Month poll on Liverpoolfc.com, seeing off competition from Fabinho and Sadio Mane.

“Looking back, it was a really, really good month for me and a step in the right direction to where I want to get back to,” he told Liverpoolfc.com upon receiving the Standard Chartered prize.

“That’s the thing with football, in the space of a week or two, a lot can change for an individual or a team – and I’ve sort of had that with Genk, Arsenal and then Genk again, with a really good win away at Aston Villa for us between as well.

“It’s been a bit of a crazy 10 days/two weeks, but it was really positive for myself with where I want to get back to. In terms of goals, I don’t think I’ve ever been as consistent before in the space of a couple of weeks, so that’s been really nice, but I still think there’s a long way to go for me to get my all-round game back to where it needs to be.

“It was a good month moving in the right direction, for sure.”

Oxlade-Chamberlain’s opening strike in Genk was his first goal for Liverpool since his thunderbolt in the Champions League encounter with Manchester City at Anfield on April 4, 2018, due to the long-term knee injury he suffered later in the same month.

So, after all that hard work in his year-long period on the sidelines, how did it feel to finally hit the back of the net once again?

“It feels like I’ve been back for a long time – without featuring too heavily, I was back in training at the end of last season and played a couple of times. For a goal to finally go in from a shot from outside the box, which is something I started to do a lot more before I got injured and had a bit of success with, it was nice.

“When the second one went in against Genk, it was really nice for the confidence and for all the hard work because when something like that comes off, it’s a great feeling. Maybe it was a bit lucky because if I tried that 10 times, it’d only go in once or maybe twice! But when you’ve worked hard to get back to doing something you love and have wanted so badly, when it goes in it’s nice to see that hard work pay off.

“The goal against Arsenal was nice, too, and then obviously to follow it up then and score the other day against Genk.

“I feel as though maybe I haven’t been playing as well as I’d like in terms of my all-round game and certain aspects of it, but I feel like I’m getting a feeling of being in areas where I can affect the game even when I’m not having the best game.

“As long as I can make sure I am getting the hard work and graft in, and [working on] the defensive side as good as I can or keep improving on it, I feel like I am getting myself in areas where I can pop up or maybe get a goal or affect the game. I’ve been happy with that side of things and it’s a feeling you can’t really describe, you just find yourself in the right areas and have the confidence to try things.”

Oxlade-Chamberlain’s fine October form continued into November when he drilled in the winner in Tuesday’s 2-1 victory over Genk at Anfield.

It took his tally to four for the season so far, which is just one short of his overall total for 2017-18.

He smiled: “I thought I did alright for goalscoring in my first season, but I don’t think I scored my first goal until around this time of the season, so to have four at this point is really nice – and something, being honest, I am not that used too, really!

“It inspires you to make sure I keep that up now. The best strikers know goalscoring comes and goes and you’ll have moments when you’re not scoring, let alone myself who is not a prolific goalscorer as history would say. I won’t have months like this all the time for sure, but if I keep getting into those areas, keep trying to shoot from outside or in the box, hopefully more will go in.

“It’s been a really good couple of weeks for me on the goalscoring front of things and I’ll keep sticking at it to make sure I can keep hitting the back of the net.”

It’s the first time Oxlade-Chamberlain has been awarded the club’s Standard Chartered Player of the Month, with fans eager to recognise his contribution to Liverpool’s table-topping form.

And their support isn’t something the 26-year-old is taking for granted.

“It’s always really nice to be appreciated by the supporters,” Oxlade-Chamberlain said. “Our supporters are a special bunch of fans. The love they show when you’re on and off the pitch, or around the city or on social media, is fantastic.

“For someone like me, who is coming back from an injury and just starting to pick up a little bit of form and play a bit more, it’s really, really nice to feel the support and appreciation from them. I always really appreciate their support. They probably know I am not fully at my best yet, and with that it’s really nice to see them supporting me and a thing like this – being voted Player of the Month – really nice.

“I’ll keep working hard for them and try to make sure I get that form fully back and finish off the season strongly with the boys.”