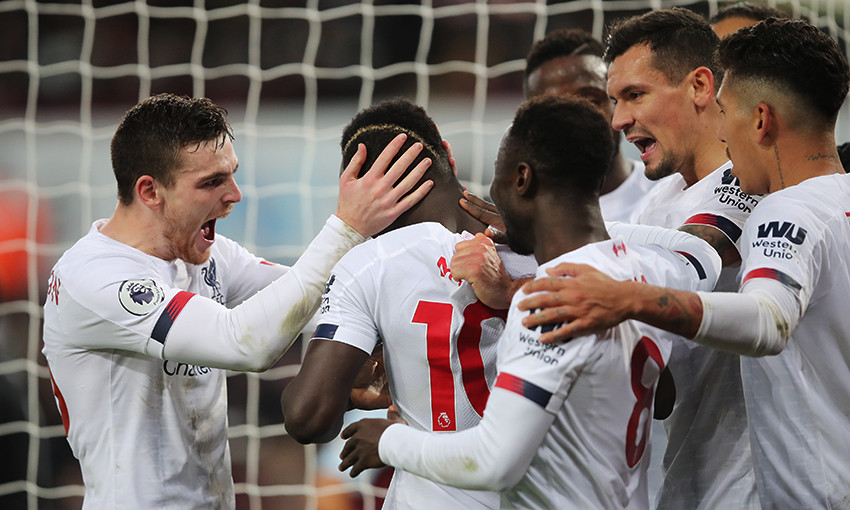 The Reds forward headed home a near-post corner deep into stoppage-time after setting up Andy Robertson for an 87th-minute equaliser, to overturn Trezeguet's first-half opener for the hosts.

Here are five talking points from a dramatic match... 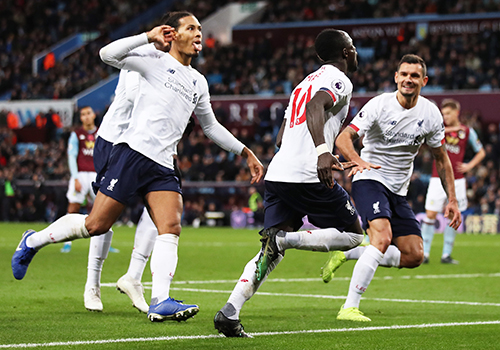 With three minutes of normal time remaining at Villa Park, Liverpool's run of 27 league games unbeaten appeared to be coming to an end. But Mane had different ideas.

As the clock inexorably counted down, the Senegal forward took possession on the right flank and waited.

Without panic, when the time was right, he delivered a pinpoint cross to the far post for Robertson to head home a brilliant equaliser.

In the 94th minute, Mane got in front of his marker and flicked in Trent Alexander-Arnold's near-post corner to secure a priceless win for Jürgen Klopp's men.

All in a day's work for Liverpool's leading goalscorer this season. 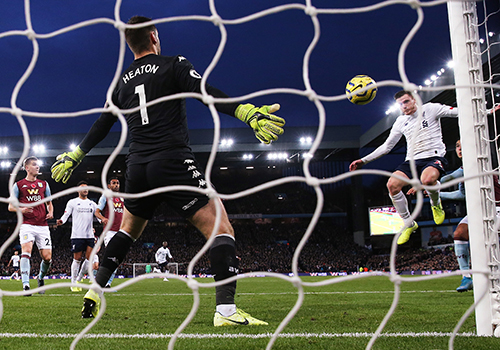 Liverpool dominated the match against Villa with more than 73 per cent possession and left-back Robertson spent the majority of the game pushed up into the opposition half.

In fact, of the Reds' starting XI, only the front three of Mane, Mohamed Salah and Roberto Firmino were more advanced than the Scotsman. 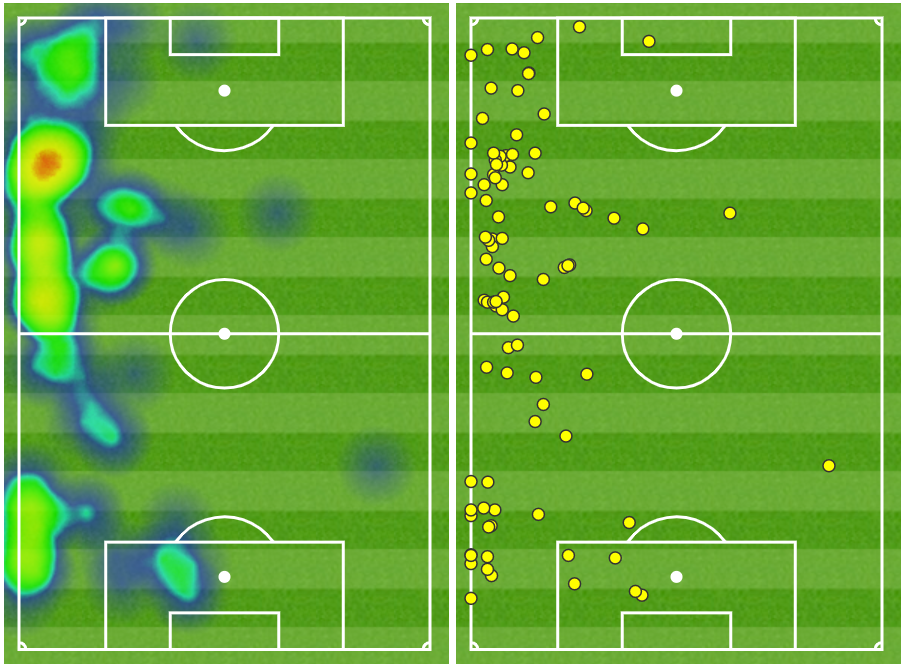 Fitting reward, then, that it was one of the 25-year-old's lung-busting runs into the box that delivered the equaliser - his first Premier League goal for Liverpool since May 2018.

Forty-seven of his 61 passes in the match came in the opposition half to further highlight his attacking intent. 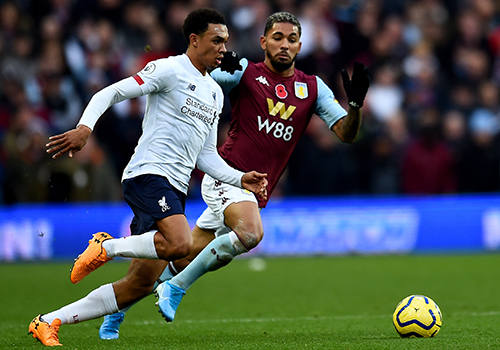 On the opposing flank, right-back Alexander-Arnold became the fourth-youngest player in Liverpool's history to notch 100 appearances for the club when he stepped out at Villa Park.

And the Scouser marked it in trademark fashion - with yet another key assist for the Reds to set up Mane's winner.

The Academy graduate, who recently turned 21, made his debut against Tottenham Hotspur back in October 2016 and since then only Firmino (36) and Salah (28) have provided more assists for the club than his 22.

He could have celebrated the century of appearances with his sixth Liverpool goal late on, but his goal-bound free-kick was deflected over the bar.

However, it was that effort that led to the corner from which he set up Mane for the winner. 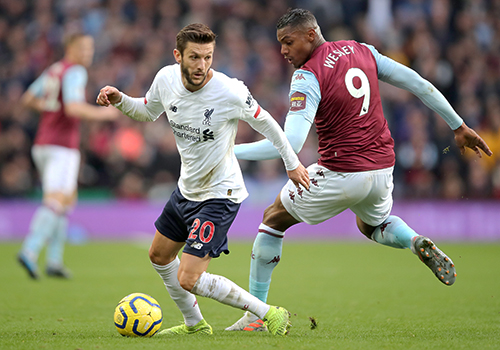 Adam Lallana made his first Premier League start of the season as Klopp made one change to the side that beat Tottenham 2-1 last weekend.

In for virtual ever-present Fabinho, the midfielder initially dropped into the Brazilian's deep-lying anchor role - having also started in the centre of the Reds midfield three in League Cup victories over MK Dons and Arsenal.

However, there appeared to be a fluid rotation between the No.20, Jordan Henderson and Georginio Wijnaldum as to who dropped back and who pushed on, and most of Lallana's work was done in the opposition half. 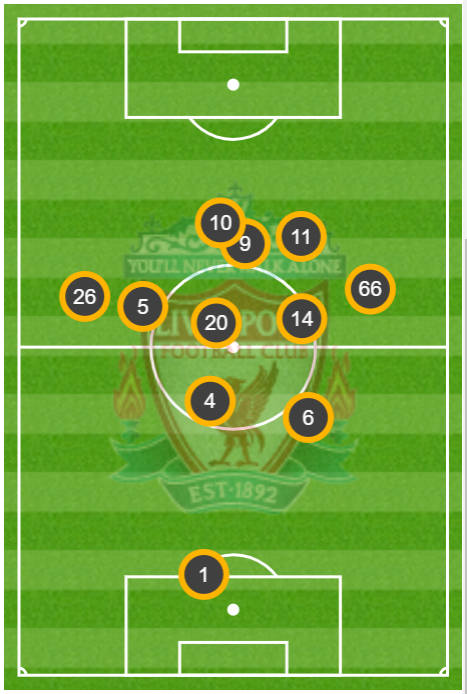 The Englishman still contributed a team-leading five tackles and 11 possession regains but also made 86 passes - bettered only by Henderson's 95 - and enjoyed a completion rate of 88.4 per cent - second only to Wijnaldum (90.9 per cent) of the starting outfield players.

Lallana also got himself in the box and had a great chance to score Liverpool's equaliser on 73 minutes but glanced his finish wide. 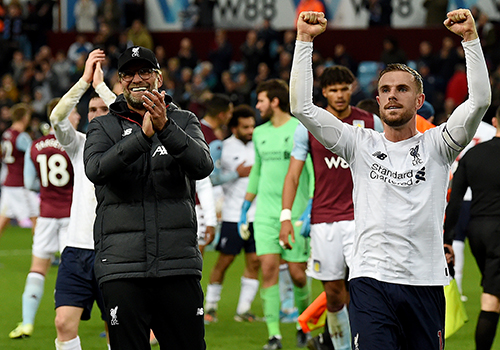 For the second time in a week Liverpool came back from a goal down to win 2-1 and keep their Premier League title challenge on track.

Last Sunday, Klopp's men did it against Tottenham at Anfield, but left it nerve-janglingly late to repeat the trick at Villa Park on Saturday.

However, late goals are becoming something of the norm under Klopp. Since the start of last season, the Reds have scored 30 Premier League goals inside the last 15 minutes of matches.

35 - Sadio Mane scored the 35th 90th-minute winning goal by Liverpool in the Premier League, 10 more than any other… https://t.co/afecjGE09g