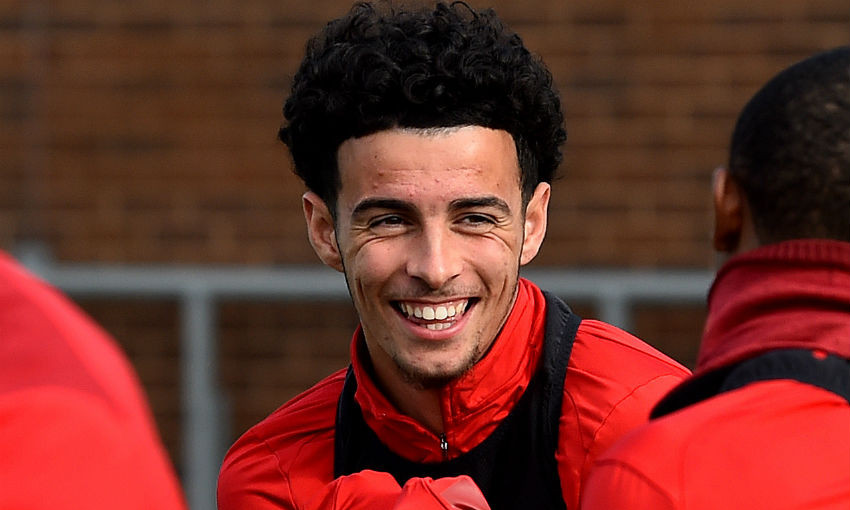 Curtis Jones would accomplish a target he set when he joined Liverpool at U9 level should he grace the hallowed Anfield turf on Wednesday night in the Carabao Cup.

The Scouser made his second senior appearance for the Reds last month in the third round of the competition when he claimed the Man of the Match award for his display in the 2-0 win at Milton Keynes Dons.

Jürgen Klopp's men now contest Arsenal for a spot in the quarter-finals, with the clash potentially providing Jones and his young teammates another opportunity to showcase their talents.

Read on below as Liverpoolfc.com sat down with the No.48 to look ahead to the encounter with the Gunners... 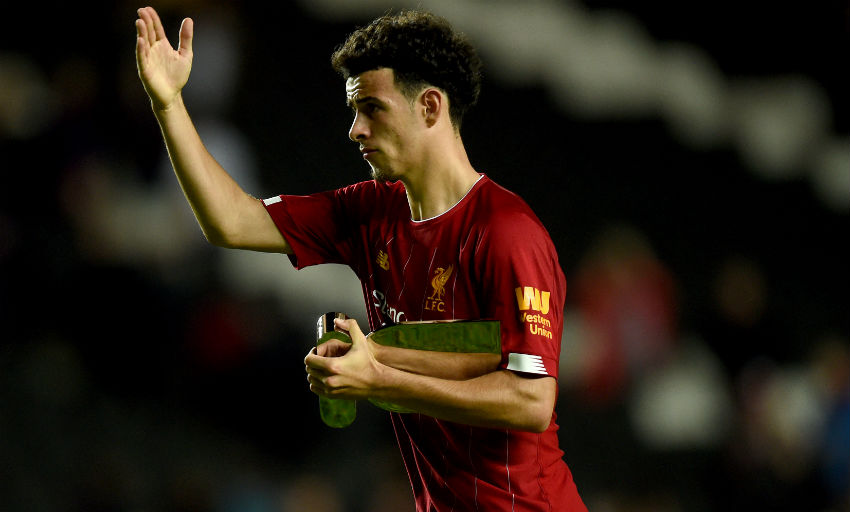 Curtis, can you tell us what it would mean to a young Scouser playing under the lights at Anfield for the first time?

It'd be a dream come true. Growing up, going through the Academy, being a local lad and loving the football club, my only dream is to go out there and play at Anfield and represent this club. Hopefully I'll get a chance to do that on Wednesday.

When you joined the club at U9 level, did you ever think that one day you could be playing at Anfield with the first team?

Yeah, but no! I'm a kid that's confident, I've got belief in myself. But joining so young, the goal was always so far away. So I was only just focusing on [progressing] step by step. But now I'm thinking it could almost be coming true, it's an amazing feeling.

How often did you go to Anfield to watch the first team as a fan?

When I was younger my mum used to always take me to any game that I could go to, regardless if it was a first-team game or an U21s game. I always used to try to go because that's how I am. My family are all big Reds and they go to every home [game] that they can go to and away games also. It kind of just ran through into me and I'm fortunate to now be in the position where they can come and watch me.

I scored two goals against Arsenal in the Youth Cup! I've also had other games, but that was definitely the game that I remember the most. If I start, don't start or come on, whatever happens, but if I'm on the pitch I will definitely try to have a game to remember like the Youth Cup game. Hopefully I can go and score another brace.

After that MK Dons win, I bet you just couldn't wait for the Arsenal game...

Definitely. I thought I had a good game against MK Dons and I was fortunate enough to come away with Man of the Match, which kind of summed up a good performance from me and the rest of the boys. My focus is on Wednesday and I can't wait to see what happens.

Do you know much about Arsenal and what to expect from them? They handed opportunities to a few youngsters in the last round...

Everyone saw the game they previously had and they let a 2-0 lead slip. So I think they've got to bounce back strong and I think that they know doing that against a Liverpool side will definitely be the perfect opportunity with how well we're doing. I know they've got a lot of young players that I know of who are really good players that could be getting an opportunity to play. Even the senior players that aren't getting a start in the team in the Premier League, if they get a chance to go and play, they're going to be up for it and ready.

This competition, the Carabao Cup, means everything to you and your young teammates because it gives you first-team opportunities, doesn't it?

Of course. We all know how hard it's going to be to break into Liverpool's team and to be getting opportunities. But the Carabao Cup is definitely a great opportunity for myself and the other young lads to be getting game time and showing what we can do. For me, it's about going out there, shining and showing the ability that I have. I'll be trying to do that in every game that I get.

You've made two appearances for the first team now. How different a player do you feel from the one that made his debut against Wolverhampton Wanderers last season?

Loads different, to be fair. I've always been a confident lad and in the Wolves game I was still confident, but I had to handle a few things that I hadn't come across before, which kind of shocked me a little bit. Just in terms of how fast the game is, the fans, the game itself. But being around the first team for longer and getting more training sessions and watching them prepare and do their things for games, it's helped me. I think I'm just a more mature player and I can handle the pressure a bit more.

You've got memories now to last a lifetime. I guess your target is to make many more...

What has the manager or the senior players said to you to help with your development?

It's more about the understanding of the game and doing what the game requires. Everyone knows that I like to go and attack and dribble with the ball. But if the game needs more defending and more running - the other side of the game that I'm not used to doing - then it's down to me to stick in there and dig in deep and help the lads out. The other side of the game, they've been telling me to just be myself, be confident and know when to use my skills and dribbling and know when to just play two touch or one touch. It's helped me a lot.

You've been handed the captain's armband for the U23s and U19s in the UEFA Youth League this season. How much has that helped with your development?

A lot. As a character, it's helped me a lot. Getting around the lads and trying to boost up my personality and just the way I am as a person has helped me a lot. It's also just given me more responsibility on the pitch, so I know that I need to kind of be the main leader and knowing that I need to keep my standards to the top of my game for as long as I can. It's definitely helping me out a lot.