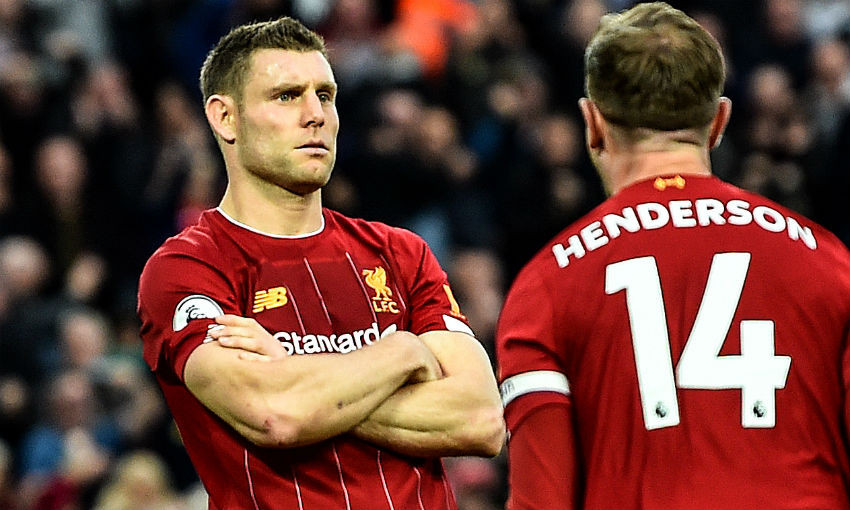 Jürgen Klopp feels he has a unique footballer at his disposal in the form of James Milner.

Liverpool’s Premier League winning streak extended to eight games this season and 17 overall thanks to a nerveless 94th-minute penalty by their vice-captain on Saturday.

Having earlier provided a classy assist for Sadio Mane’s opener, Milner converted from the spot deep into stoppage time to secure a dramatic 2-1 victory over Leicester City at Anfield.

It was put to Klopp post-match that there is no other player like his No.7, and the boss told Liverpoolfc.com: “No, that’s why he has [played] like 7,680 Premier League games!

“That’s true [that he’s unique]. Exceptional, exceptional. It just sets the benchmark, that you’re 33 and doing things like this. Obviously age is no issue.”

Milner’s late intervention ensured the Reds head into the October international break with their perfect 2019-20 top-flight record intact, and Klopp asserted that his side deserved to edge out an opponent he expects to qualify for next season’s Champions League.

The manager continued: “This one [win] alone feels already big enough, to be honest, because of how difficult this league is [and] how difficult the life of an LFC player is.

“I think Leicester at the end of the season will be in the top four and then they will realise how different it is when you play Wednesday, Saturday, Wednesday, Saturday. The quality they have is already good and we all know Brendan, what a sensational manager he is and what he’s doing with them.

“So it was difficult, but for 60 minutes we were the clear better side. We played really good football, we forced ourselves for a proper performance, to be honest, but with a little problem: we only scored once.

“That was really nice but each goal you can score as long as the tank is full obviously helps massively and we scored once. They came up, not with chance after chance but just with more possession. We couldn’t do the things anymore which we could before because of the dropping energy level, obviously.

“We made the changes but then they score their one goal. I can’t remember a lot of chances [for Leicester], to be honest, they had one in the first half but it was offside when Adrian made a sensational save but this ball goes in and we have to accept that.

“But then I think there was again only one team who wanted to win the game, really. I’m not sure when Robbo’s big chance was when Kasper Schmeichel made a really good save, but I know the counter-attack, when Mo did really, really well - Soyuncu played a super game against him but here he kept the ball, came inside and the other guy knocked him down in a manner I really struggle with accepting, to be honest.

“But it would have been a brilliant chance and then we have the chance around the penalty where we were in the box and really fighting for these situations, we had the sensational corner - short pass, Trent to Robbo, Robbo’s cross and Virg completely free, he usually uses a situation like that.

“So, if you score in the 95th minute with a penalty everybody would say that’s lucky but over the full game we had more chances, we were the better team, so I’m really happy about that.”