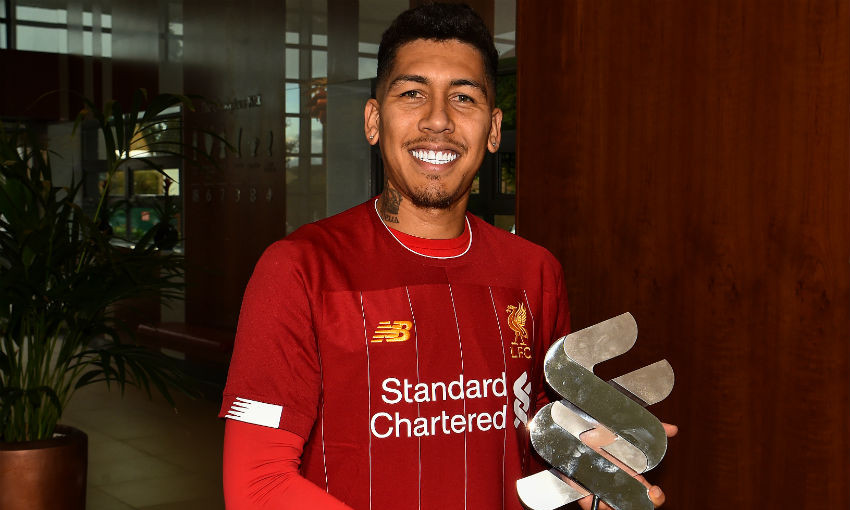 Roberto Firmino today collected the Standard Chartered Player of the Month award for September at Melwood.

The Liverpool No.9 was voted the team’s star man in a poll on this website after helping his side maintain their 100 per cent start to the Premier League season.

Firmino produced a sensational cameo performance off the bench against Newcastle United, creating two goals – the second assist via an exquisite piece of skill – to see the Reds come from behind to win.

The Brazilian was then on target with a clinical header in the victory over Chelsea at Stamford Bridge and featured at Sheffield United as the month was wrapped up with another three points.

Firmino, who edged out centre-back Joel Matip and goalkeeper Adrian for the award, told Liverpoolfc.com: “It's been incredible, another incredible month that we have had.

"We played well, we've won games. We had a bit of a setback but we've been able to pull ourselves and win the game.

"I'm very happy with my development here at the club. My objective is to be constantly growing and contributing to the team with goals and assists. So I'm dedicated to working as hard as possible to constantly be helping the team.

"We've achieved our objectives despite what happened in the last game. It was a slip but we got the job done and we're keeping in control of our rhythm. The team is going from strength to strength.

"With the quality that we have, we still haven't seen anything. We're maintaining our focus. We'll see how it goes further on."

Firmino's sublime displays on the pitch so far this season have led to regular airings of his ‘Si Senor’ chant in the stands.

"It's incredible," he said of the song. "As I have said before, it just motivates me more to give more of myself and make more effort on the field to help my teammates. It's a beautiful song that they have made up for me and I'm really in love with it."

Vote now: Who was Liverpool's Player of the Month in January?