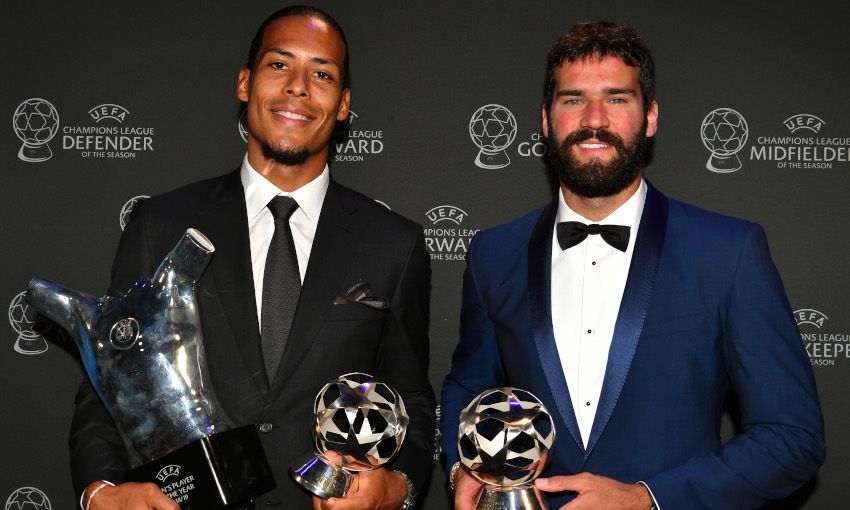 Jordan Henderson has detailed the delight within Melwood at Virgil van Dijk and Alisson Becker winning UEFA awards, but insists the duo would gladly swap their accolades for further team success.

The news was greeted with delight at the club’s training ground when it was announced; however, Henderson is adamant Liverpool’s collective fortunes are of more importance to the pair.

He wrote in his column in the official matchday programme ahead of today's game with Newcastle United: “I can’t begin to tell you how chuffed we all were for Alisson Becker and Virgil van Dijk for winning in the awards categories they were nominated in. Big Ali scooped UEFA Champions League Keeper of the Season and Virg won Defender of the Season and, of course, the Men’s Player of the Year.

“What was typical of both players – and typical of the attitude in our team – is that they were quick to say the prizes were as much down to the help of everyone at the club as anything else, not just themselves.

“I’m sure when some people hear that sort of thing they roll their eyes and think ‘well you would say that in public', but both of these lads epitomise our dressing room by not just saying it but meaning it.

“Both Ali and Virg have been as generous in private as they have been in public to make sure everyone who supports us on a day-to-day basis feels part of moments like these. It’s why, when Virgil’s name was announced on stage for the main award of the ceremony, there was a huge cheer that went up around Melwood from those who’d headed up to the canteen as soon as they’d come in [from training] to try and find out what was going on in Monaco.

“It was a really nice moment and it prompted an inevitable scramble of iPhones to say congratulations, but every person inside our training ground that day was pleased as punch.

“Individual awards within team sports are an interesting topic, but I don’t think it ever causes anything but happiness for the wider group when the situation at a club is a healthy one. I’m pretty sure I hold the record for handing over Man of the Match awards to teammates during post-match interviews, but even though I might have joked about it before, I couldn’t care less who I’m giving it to – as long as they’re wearing our shirt and we’ve won the game.

“I mentioned before about both Ali and Virg being quick to praise ‘the team’ for their individual wins that night, but what is even more important is the other part of what both said. Both of them – and I know this to be 100 per cent true – would trade any individual honours for more team prizes.

“The more ‘Player of the Year’ awards our guys are winning in football can only be a good thing, because more often than not it means the team itself has achieved something.

“Later this month Ali, Virg and the gaffer, Jürgen, are up for FIFA awards and I hope they win them. But I know all three would swap them in a heartbeat for three league points. It’s great that we have a culture where we can appreciate the happiness of the individual knowing all the time that the group is what matters to them and us the most.”