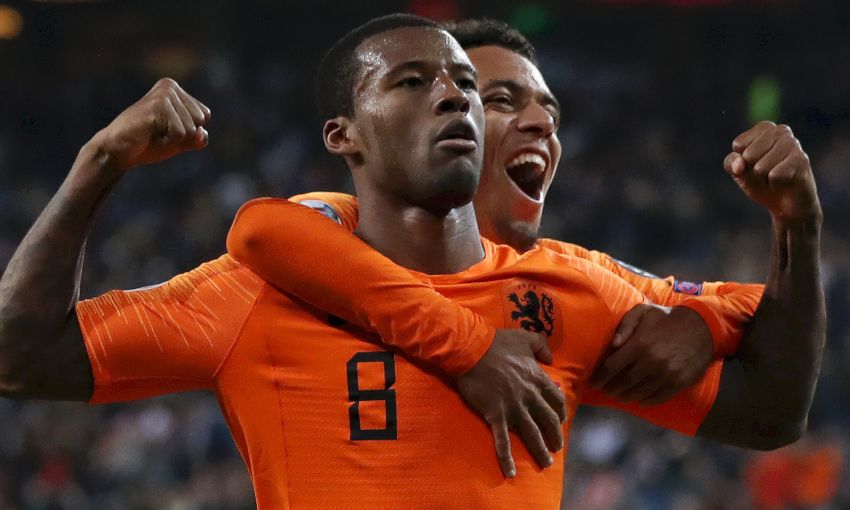 Georginio Wijnaldum was among the goals again on a mixed night of results for Liverpool's players in international action.

Having netted for the Netherlands on Friday, the Reds midfielder repeated the trick as his country eased to a 4-0 win at Estonia in their Euro 2020 qualifier.

Wijnaldum wrapped up the victory for his country with a close-range header three minutes from time, after earlier goals from Ryan Babel (two) and Memphis Depay.

He played the whole of the Group C clash in Tallinn, as did Liverpool teammate Virgil van Dijk, with the Dutch now three points behind Germany and Northern Ireland with a game in hand.

Elsewhere in European qualifying, it was a tough evening for Andy Robertson as Scotland were beaten 4-0 at home by Belgium in Group I. Divock Origi was an unused substitute for the visitors.

Dejan Lovren got 90 minutes under his belt for Croatia, who played out a 1-1 draw with Azerbaijan away from home in Group E and now lead the section by a point.

At U21 level, meanwhile, Rhian Brewster came off the bench for England and helped to clinch a 2-0 victory over Kosovo with a driving run and cross in stoppage-time.

Phil Foden finished off the opportunity to claim his and the Young Lions’ second goal of the night, making it two wins out of two in Group 3.

Ki-Jana Hoever played 45 minutes for Netherlands U18s as they were beaten 2-1 by Mexico U18s at the conclusion of a four-team tournament.

Curtis Jones and Rhys Williams, who is currently on loan at Kidderminster Harriers, featured for England U19s in a 1-0 friendly defeat against Germany.