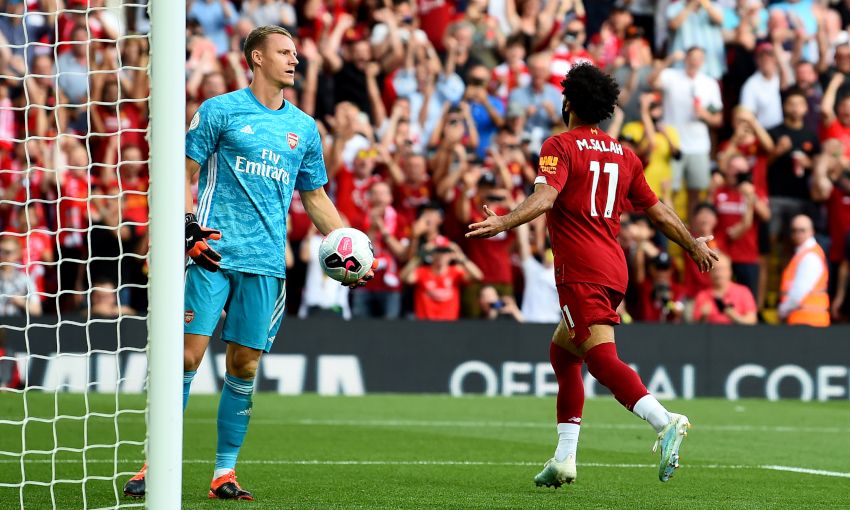 Mohamed Salah scored twice and Joel Matip was also on the scoresheet as Liverpool beat Arsenal 3-1 at Anfield on Saturday.

The victory ensured the Reds maintained a 100 per cent winning start to 2019-20 in the Premier League.

Watch out, Premier League. The unbearables are ready to roll once more. Liverpool won the battle of the top two on Saturday evening, courtesy of a 3-1 win over an Arsenal side whose strong start to the campaign hit the rocks at a sun-kissed Anfield. And the manner of the Reds’ victory, with Salah playing a central role, should send a message to those wondering if Jurgen Klopp’s side could repeat their form of last season. Against Arsenal, though, they clicked into gear with a devastating second-half performance. Matip’s header got Liverpool in front at the end of a first half in which both sides had their moments, but it was the Salah show after that. The Egyptian won and then converted a penalty to make it 2-0, four minutes after the break. And then, 10 minutes later, came an ominous sight for Premier League defences, a reminder that this remains one of the world’s elite attackers, a player capable of breathtaking moments of individual brilliance.The Gunners hate coming here; they’ve now conceded 33 goals in their last seven visits, winning none. Elsewhere there was the sight of Trent Alexander-Arnold clocking up another assist, his corner headed home emphatically by Matip, and of Andy Robertson producing yet another lung-busting performance on the other flank.

Salah, now three seasons into his Liverpool career, remains as potent as ever. Just ask Luiz. The shock-haired Gunner was frightened into the clear penalty awarded by referee Anthony Taylor four minutes after the restart, Salah slotting the perfect penalty into the top corner. But better was to come 10 minutes later. Found by Fabinho's perceptive pass on the right flank, Salah demonstrated his chief qualities in a devastating passage of play. So good, so Salah, a sixth goal in five games against the Gunners. And it ensured Liverpool now have the only 100 per cent record remaining in the Premier League and sit clear at the top of the table, a 12th successive top-flight win matching a 29-year club record.

Klopp doesn’t often spring surprises when picking his team for big games, and so his starting XI for this one was entirely predictable in truth. But there was at least one interesting aspect of the German’s selection: his decision to play Matip ahead of Joe Gomez in the centre of defence. The pair have been battling for the right to partner Virgil van Dijk in the early stages of this season, and both had been given opportunities to prove their worth as first choice. However, Matip’s performance against Arsenal may well have finally made his manager’s mind up for him - for the foreseeable future, at least. As well as scoring the crucial opener, the former Schalke man was a rock in defence and a constant architect of Liverpool attacks with his incisive passing and ability to dribble. As hard as it might be on the improving Gomez, Matip deserves to keep his shirt until injury or form dictates otherwise.

By playing a diamond in midfield, Unai Emery in effect surrendered the flanks to the forward surges of the best pair of attacking full‑backs in the Premier League, Alexander-Arnold and Robertson. To an extent that is testament to the multiplicity of threats Liverpool pose. As Pep Guardiola has pointed out, there is probably no side in the world that attacks with such fury and such a range of options from narrow positions. Especially given how Salah and Sadio Mané tuck infield, it is understandable an opposing side feel the need to overman in central areas. But doing that inevitably meant Alexander-Arnold and Robertson, 23 assists between them last season, had a lot of possession. And that meant a lot of balls into the box. Again and again crosses flashed across goal.