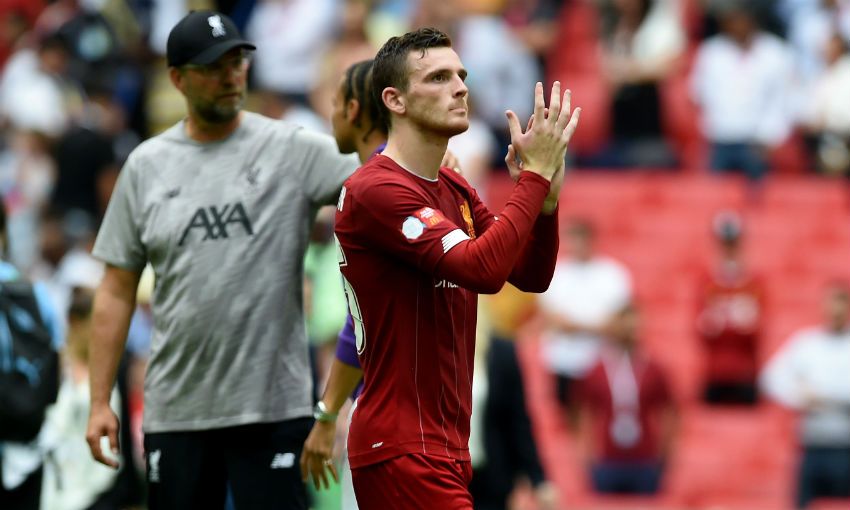 Andy Robertson is hoping Liverpool can start the Premier League season with the same intensity as they finished Sunday's FA Community Shield.

A spirited second-half display at Wembley saw the Reds better Manchester City in the annual curtain-raiser, only to be beaten 5-4 on penalties after a 1-1 draw at the end of 90 minutes.

"Friday is a big one, nobody has hid away from that as it’s the start of the Premier League and everyone looks to get off to a good start," Robertson told Liverpoolfc.com.

"Norwich City had a fantastic season in the Championship, I watched quite a bit of them and they are a very good team. So they will be coming here full of confidence after their promotion.

"I know how that feels and they will be looking to get their season off to a good start, so we know the threats that they will bring.

"But I hope that they know ours as well and we will be a lot better for today’s game going into Friday. It’s just about getting the performance right, which I’m sure we will do."

Joe Gomez felt Liverpool's showing in the capital was a strong indicator that the European champions will battle with Pep Guardiola's side for the title once again.

It's a sentiment Robertson wholeheartedly agrees with, although he predicts there could be more than two teams competing for first place come May.

"Joe is right in what he says in terms of the performance we put in," the left-back continued. "But whether we won or whether we lost today, we weren’t going to look too much into it. That was my opinion anyway because it’s a one-off game.

"We know the season did come down to that game at the Etihad really, but it’s over 38 games and that’s what it will come down to again.

"But like I said, the other teams that were quite a bit behind us last season will pose a better threat than they did last season and Man City will definitely be here to stay.

"So it will be an interesting league but it’s one where we can definitely compete in."