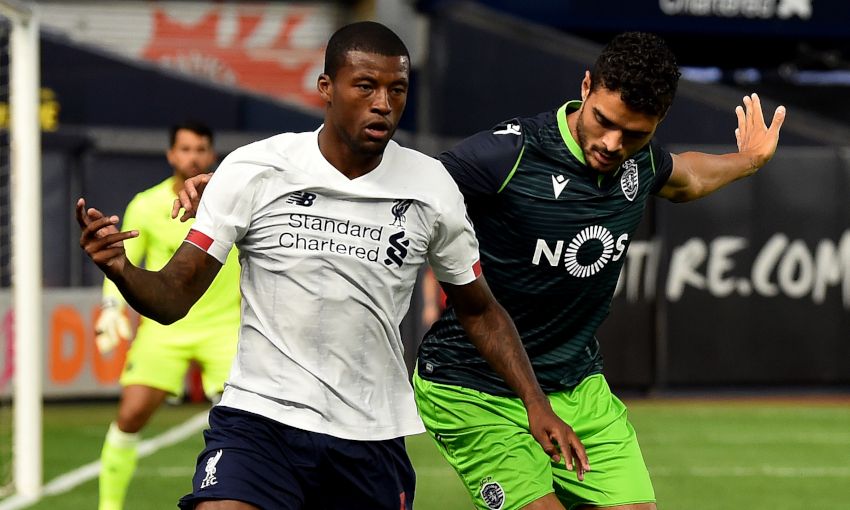 Liverpool wrapped up their United States tour with a 2-2 draw against Sporting CP in their Western Union Cup meeting at Yankee Stadium.

Divock Origi and Georginio Wijnaldum got the goals for Jürgen Klopp’s side in New York as the trophy was shared at the end of the Reds’ third game in America.

Bruno Fernandes had put Sporting in front with an early goal and, after falling behind, Marcus Wendel got them back level in the second half.

Liverpool will now head home to Merseyside from the States before facing Napoli in Edinburgh this weekend and then departing for a training camp in Evian.

Sporting struck the first blow of the night within five minutes of kick-off.

Their captain, Fernandes, tried his luck with a drive from 25 yards that Simon Mignolet attempted to collect down low but fumbled into the net.

Liverpool, wearing their 2019-20 away kit in match action for the first time, brushed off the concession and twice went close to levelling from set-piece situations.

First a swinging Trent Alexander-Arnold corner from the left puzzled Sporting goalkeeper Renan Ribeiro and his flick at the ball sent it off Joel Matip’s head and against the crossbar.

Soon after, from the opposite corner, Alexander-Arnold’s delivery found Virgil van Dijk with room to guide a downward header towards the bottom corner but Ribeiro pushed the ball away.

Their pressure told in the 20th minute, though.

Alexander-Arnold’s over-the-top diagonal freed Wijnaldum to trouble Sporting and he eventually set up Andy Robertson in the left channel to pick out the arriving Jordan Henderson in the area.

The Reds captain’s firm nod was saved well by Ribeiro but Origi was on hand to force in the rebound from a matter of yards out.

With the conditions much cooler than Liverpool experienced in Indiana and Boston earlier on their tour, there was an active feel to the contest and chances at both ends.

Klopp’s side were fortunate 10 minutes before the interval, however.

Wendel was afforded time at the edge of the box to craft a side-footed shot that bounced off the right post, hit the back of Mignolet and rolled wide.

And they compounded that stroke of luck by taking the lead themselves on 44 minutes. Tiago Ilori miscued his clearance from Alex Oxlade-Chamberlain’s outside-of-the-boot pass and Wijnaldum’s finish deflected off Luis Neto and past Ribeiro.

Still, Liverpool needed Mignolet to make amends with an excellent double save in first-half stoppage-time to deny Luciano Vietto’s header and rebound.

Sporting started the second half the brighter and were rewarded in the 54th minute.

Wendel sprung Fernandes to scamper down the left flank and jink inside the recovering Alexander-Arnold before squaring back to his teammate, who wrapped a clever shot into the bottom right corner.

The Reds were a whisker away from restoring their advantage within moments, but Van Dijk’s header from another pinpoint Alexander-Arnold delivery hit the post.

Klopp made a series of substitutions as time ticked away in the Big Apple – including a debut for Sepp van den Berg – and Sporting threatened a third when Raphinha led a breakaway and sent in a low shot but Mignolet got down to save.

And neither side could produce a winning goal, meaning the Western Union Cup was shared as Liverpool signed off their nine-day stay in America.