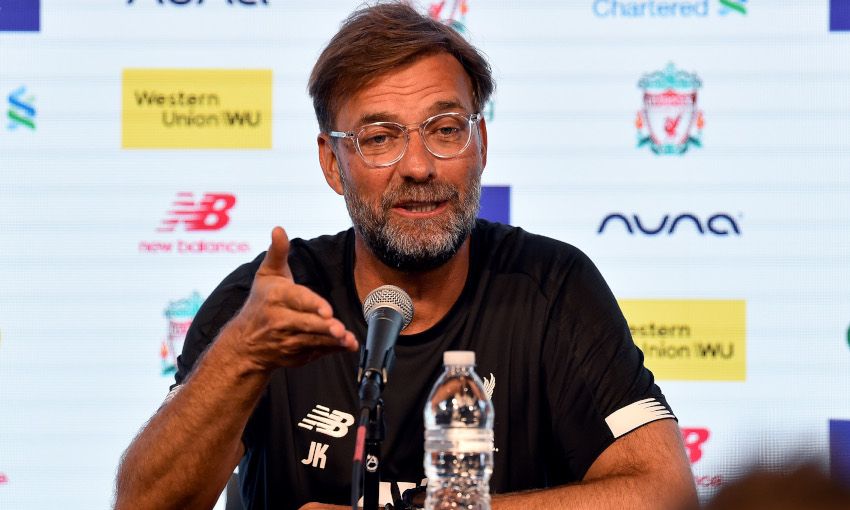 Jürgen Klopp has asserted Liverpool are ‘completely focused’ on themselves as they look ahead to 2019-20 – and not the possibilities of how other teams will perform in the new Premier League season.

The Reds suffered just one defeat during the entire top-flight campaign last term – picking up 97 points in the process – but were ultimately pipped to a first crown since 1990 by Manchester City by the finest of margins.

Pep Guardiola’s side’s haul of 98 compared to Liverpool’s 97 was enough to see them retain the trophy – and Klopp knows they will once again prove a powerful force this time around.

Nevertheless, the manager insists the Reds’ only attentions are on how they can compete at the division’s summit again and not how the clubs likely to also be challenging are shaping up as pre-season preparations continue in the United States.

“It would be great if we could be around Man City again because that’s the only possibility to have to pass them because it is already clear they are the big favourite again. No problem with that. They have a very good situation, which they showed last year especially after having 100 points in the season before – the greed they showed, the determination they showed, it was just impressive.

“Tottenham were around, exactly on the same level until March probably – I am not 100 per cent sure when they had a few difficult results, for them. That was the moment the gap became bigger, but that was the only moment.

“All the teams will start again: there is no duel with City and Liverpool and all the rest are watching us. That’s not how the Premier League is, all of these games are so difficult to play and we know we were lucky in the Tottenham game at home when they scored an own goal and in one or two more situations for sure. We were [also] unlucky in one or two games when we drew, but it is like it is.

“What we did last year, we were really rock solid in all; we were difficult to play, difficult to outplay, in general we always created chances, we were strong in a lot of departments, didn’t get nervous in difficult situations in a game, could increase pressure in different situations on the other teams. 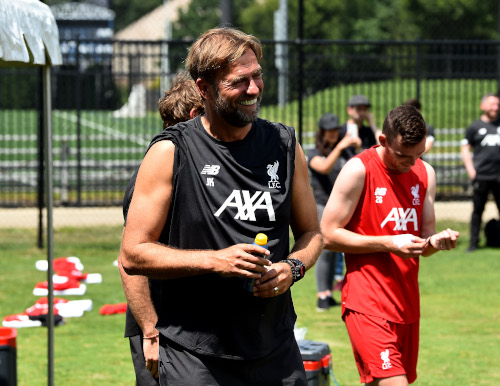 “That was all there, but unfortunately football – especially a football team – is not like riding a bike and you lose it in a specific period. You don’t lose everything, but the teamwork, how one thing leads to another, how one thing fits to the other, that’s not there from the first day again. But it’s still somewhere and we only have to make sure we all remember it again, so our improvement and our development is our main target.

“If we can get better than last year that would be great and that’s what we’re looking for, not at other teams. We play them [all] twice – OK, with the Champions League and stuff like that maybe four or five times a season – but in the Premier League it is just the two games and they are always difficult and will stay difficult. They have to stay difficult for City as well – and for the others.

“You see what Man United are doing in the transfer market, or probably will do; Arsenal want to strengthen; Chelsea have their situation but bring all the young boys, all the players on loan, back. If a team is not really influenced by a transfer ban then it is Man City because they have the players and they will be strong as well. Everton, probably nobody wants to hear that here, but they – year in, year out – really strengthen the squad. [They’ve made] good signings again [and] they had a good team already last year.

Despite Liverpool’s achievements last season, which, of course, included the Champions League final triumph at its conclusion, Klopp feels there is room for improvement within his squad.

Indeed, the boss is convinced 2018-19’s experiences will stand the players in good stead for the challenges ahead.

He continued: “The first thing we have to learn, and maybe you have to learn, is it makes no sense to compare seasons. If you lose two games and win all the others then we have more points than last year, for example.

“In the moment when we lose a game and then – probably it will happen like this, you can imagine – everyone starts [with] questions asked after any defeat. We know we don’t have to compare the season – to win the league, or to achieve whatever, you have to have to be the best team at the end. You have to go through all the difficult moments as a group, as a unit, and that’s what we did so far and what we have to do again.

“We finished last season with a massive high, clearly. It was brilliant, absolutely brilliant, and will stay with us forever, which is brilliant as well, but apart from that it is a new season. We achieved what we achieved last year by working extremely hard on all the things we had to work on – and that’s what we have to do again.

“The boys are a year older, the boys are a year further in their careers, they are more experienced in different situations. That’s what we have to try to use. Then, let’s play football again against a lot of very, very strong teams. That’s our main problem, actually: the others don’t sleep and develop as well, so we have to be ready.”