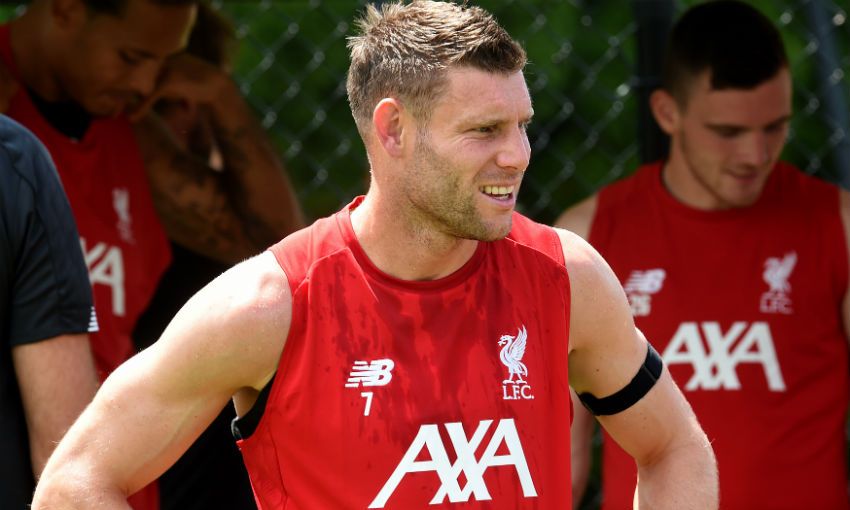 The upcoming campaign represents the fifth of Milner’s Anfield career and the No.7, now 33 years old, has looked as fit as ever in the early weeks of pre-season.

The Reds’ friendly wins over Tranmere Rovers and Bradford City that preceded their tour of the United States both featured impressive 45-minute run-outs from Milner, who netted twice at Valley Parade last Sunday.

And Klopp has explained why the Champions League-winning midfielder’s influence is of vital importance to his squad, both on and off the pitch.

Inside Training | Behind the scenes in the USA

“There have not been many,” the boss told Liverpoolfc.com in Indiana, when asked if he has ever worked with a player of Milner’s ilk before.

“I was blessed to have a few players like this; Sebastian Kehl, for example, at Dortmund was a more experienced player in a very young team and was a leader in that team, like Millie is. And I think Millie improved his football a lot in the last two or three years as well.

“His attitude is outstanding. Millie is a sports guy, in each sport he is doing he is brilliant. Without Millie it wouldn’t have been possible. His kind of a little bit dirty dressing-room talks, I cannot do, these things you say in the dressing room that I am not allowed to say in public. That’s the last little kick and that’s nice.

“We have so many leaders in the team: Hendo of course, Millie of course, Gini, Virg, all these guys, they are in a different way all leaders. They know what to do and they will know it for a new season.

“Millie looks again in the pre-season like [he’s in] in his early 20s; but he isn’t, he knows that, and we try to respect that. But he is not only in the game not really stoppable, in training it’s the same. All good.”