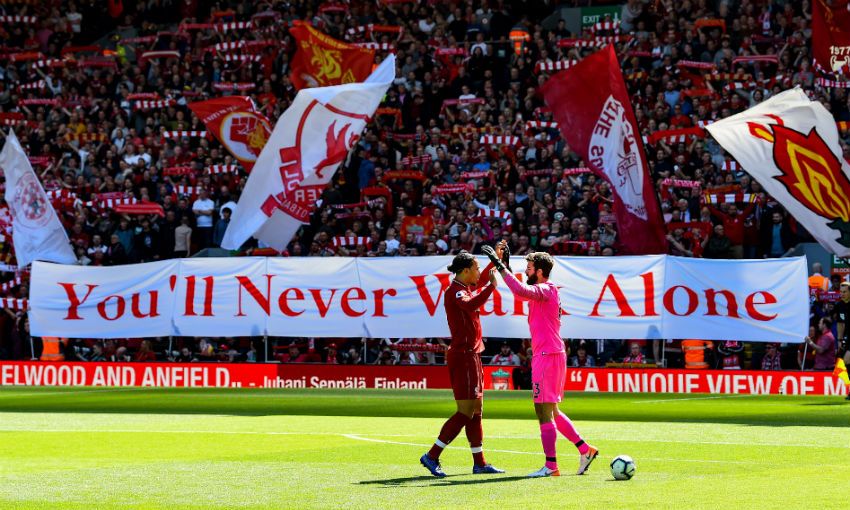 A total of 21 top-flight clean sheets saw Alisson scoop the division’s Golden Glove prize in his first campaign at Anfield, while Van Dijk’s imperious form throughout 2018-19 resulted in the centre-back being crowned PFA Players’ Player of the Year and Premier League Player of the Season.

And the Brazilian has detailed how the Dutchman fortifies those around him.

“He gives a lot of confidence for the team and the players,” Alisson said.

“When you have Virgil van Dijk – the giant – on the pitch, maybe it scares the opposition. For me, he is special.

“I have great defenders [in front of me] – Joel, Joe Gomez, Dejan. Everyone did a great job this season. But Virgil has something special, he is the big man.”

Alisson also reflected on a successful debut season with the Reds and explained how he feels at home both on and off the pitch.

“Everything has been good. It was a great season with great moments,” the 26-year-old, currently away on Copa America duty, continued.

“The club is top, my expectations about the club happened. I’m happy to be here with top staff, top players and top supporters. I’m very excited every day to come and work hard, to play the games, to enter the pitch and do my best for my teammates, the supporters and my family, and to try to achieve something big for this club.

“It’s not too different from the football I played in Italy and Brazil. I play for the national team so you play against every kind of player. To come here to the Premier League, for me, it was one step up for me in my career.

“I just focus in every game and every day. I work a lot to do my best and try to not feel the change that a change of city and country brings to you. I’m very happy.”