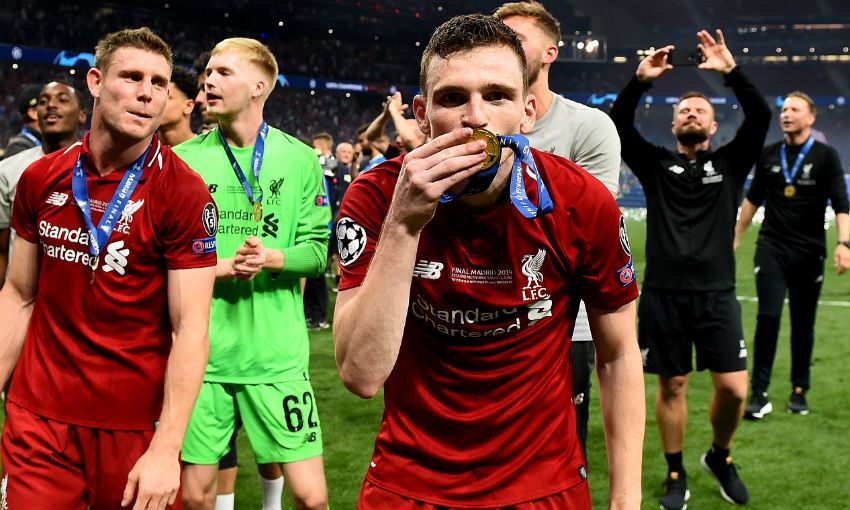 A constant desire to improve means Andy Robertson will still look to build on a season where he helped set new benchmarks for full-backs.

Robertson ended the 2018-19 campaign in possession of a Champions League winner's medal and the Premier League's best defensive record with just 22 goals conceded.

The Scot and teammate Trent Alexander-Arnold also made history as their combined 23 assists in the Premier League was the first time two defenders from the same team have each registered double-digit tallies in a single season.

"I think I've been good but I can always be better," the 25-year-old said. "That's the way I've always worked.

"I'll never praise myself because I think there's always improvement to be made.

"Even when I have a good game, you can still do things better. I've had a good season but I still have a lot of improvement to make and hopefully I can show that in the following seasons."

Robertson will be accompanied in his pursuit of perfection by PFA Players' Player of the Year Virgil van Dijk.

The centre-back's influence on the Liverpool dressing room has been equally impressive as his performances on the pitch, according to the player to his left.

"He brings everything, in my opinion," Robertson said of the No.4. "He is one of the leaders in the changing room now, he is vocal. He is a lovely person off the pitch. He has been so crucial to what we do.

"The players around him have helped; Joel [Matip] has been magnificent when he has been called upon this season, Joe Gomez was different class at the start of the season, and Dejan [Lovren] has obviously played games and stepped up where he has been great.

"The central partnerships have been really good this season. Virgil takes all the plaudits but rightly so – he has been on a different level to anyone this season. What he brings on and off the pitch is special."