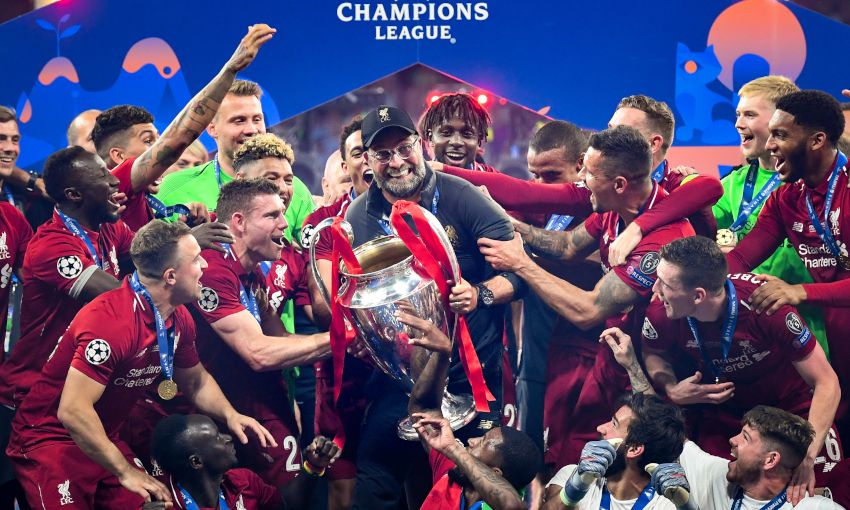 Liverpool have won it six times.

The Reds returned to the summit of European football by beating Tottenham Hotspur in the 2019 Champions League final in Madrid 10 days ago, prompting joyous scenes at Estadio Metropolitano and back in the city.

The road to that showpiece occasion was littered with crucial moments and split-second decisions that affected the outcome of individual games, two-legged ties and the eventual destination of Old Big Ears.

But, in keeping with the theme, we have picked out six of the most important that underpinned Liverpool’s journey to a stunning sixth European Cup triumph…

A now-famous video filmed in the early hours after Liverpool lost the 2018 Champions League final represented the starting point of their journey to success in Madrid.

After a return flight from Kiev to Liverpool and one or two drinks of commiseration following defeat, Jürgen Klopp and assistant manager Peter Krawietz were joined by friends, family and the lead singer of German rock band Die Toten Hosen, Campino.

In an attempt to shake off the frustrations of what had unfolded against Real Madrid the previous night, and focus on the possibilities of the future, they came up with a tune of defiance.

We swear we’ll keep on being cool,
We’ll bring it back to Liverpool

When the video was shared online, it had the desired effect.

Klopp’s refusal to give up or let the disappointment consume him struck a chord with supporters and galvanised those floored by the near-miss at the NSC Olimpiyskiy Stadium.

The road to Madrid was long – but it could be travelled. Their message was to become a prophecy.

Liverpool’s Champions League campaign kicked off in style as Paris Saint-Germain pitched up at Anfield with their formidable front three of Edinson Cavani, Kylian Mbappe and Neymar.

The Reds were without one of their own regular attacking trio, however, due to an eye injury suffered by Roberto Firmino the previous weekend.

But the Brazilian was on the bench and, in any case, his replacement on the night got the goalscoring under way, Daniel Sturridge flicking the hosts in front with a header at the Kop end.

James Milner’s converted penalty soon after looked to have put Klopp’s team in unassailable command, only for Thomas Meunier and then Mbappe to strike back for PSG.

The last – and crucial – word was still to come, though.

On as a substitute and with the game into stoppage-time, Firmino shuffled into just enough space inside the opposition box to thread a winning goal into the far corner and turn one point into three that would prove priceless when the group concluded.

Alisson’s stunning save against Napoli

Three consecutive defeats away from home in Group C had left Liverpool with a precise and difficult mission to qualify for the knockout stages when Napoli visited Anfield on matchday six.

In an equation spookily reminiscent of the famous 2004 tie against Olympiacos – a foreshadowing of what was to come, perhaps – the Reds had to beat the Serie A outfit either 1-0 or by two clear goals to leapfrog them into second place.

Unlike that decider 14 years earlier, however, the hosts did not fall behind on the night.

Instead, in the first half Mohamed Salah glided through the opposition defence and placed a shot between the goalkeeper and his near post to secure the advantage his team needed.

Though Klopp’s men were unable to gain a more comfortable cushion, the formidable performances of Joel Matip and Virgil van Dijk at the other end appeared to be sufficient to ensure no Napoli response.

But, in stoppage-time, their chance came.

A cross in from the right flank evaded those in red and found the unmarked Arkadiusz Milik eight yards out. His first touch was perfect, his second straight at goal. Liverpool’s elimination seemed the blink of an eye away…

… until Alisson Becker stretched out his body and somehow scooped the ball away from the net, deflating Napoli and booking a place in the last 16 for the eventual European champions.

A goalless stalemate at Anfield meant Liverpool and Bayern Munich’s knockout tie was intriguingly poised ahead of the return in Germany.

Klopp insisted the result would feel better for the Reds by the time of kick-off at Allianz Arena and the manager’s optimism was borne out by an impeccable display that yielded a 3-1 victory.

After Sadio Mane’s sweet solo breakthrough was levelled by a Matip own goal, the turning point of the whole tie came via a towering header from Van Dijk midway through the second half.

The Netherlands captain – who had missed the first meeting due to suspension – belied his powerful frame to sneak into space inside the area and meet a right-wing corner with a firm downward nod that filled Liverpool with conviction and Bayern with doubt.

Mane’s second of the evening soon put paid to any hopes of a comeback and Klopp later hailed the maturity of a statement performance and result.

“We will see what we can do with it, but it is still a fantastic sign that we again set a mark for LFC, for this wonderful club, that we really are back on the landscape of international, top-class football,” he said.

“We all think that’s where this club belongs and tonight we proved it a little bit.”

To distil Liverpool’s 4-0 victory over FC Barcelona down to one incident is a tricky task given the events of that truly unforgettable football match.

But Trent Alexander-Arnold’s moment of inspiration to lay up Divock Origi for the fourth goal that tipped the aggregate score in the Reds’ favour will rightly be remembered for decades.

It was the strike that sent them to Madrid. It was the quick-thinking piece of play – later labelled ‘genius’ by Klopp – which sealed a comeback probably unrivalled in European games at Anfield.

Many thought it impossible for Liverpool to recover from their three-goal deficit after the opening leg at Camp Nou, where the scoreline was a harsh reflection of the match.

But Origi’s early breakthrough six days later was followed by two in two minutes from second-half substitute Georginio Wijnaldum in front of a raucous Kop and, suddenly, it was on.

Then, Alexander-Arnold bought a corner down the right-hand side. He shaped to take it before seeming to walk away and leave the ball for Xherdan Shaqiri.

In the second’s hesitation that ensued, the Scouser saw something nobody else did. “As I was walking away from the ball, I looked across into the box and saw Divock,” the No.66 explained of his snap decision to sweep in a cross.

“[I thought] ‘hopefully he’ll see it and be able to finish it’. It paid off massively for us.”

Origi’s third shot in the Champions League this season brought his third goal. And it brought the European Cup back to Liverpool.

Heading into the final minutes of a tense affair against Tottenham at Estadio Metropolitano, the sides were still separated only by Salah’s early penalty.

The Belgium international, who spent the previous season on loan from the club and made just three appearances for the Reds in the first half of this campaign, had emerged as the team’s go-to man in late April and early May.

And, having been sent on in Madrid, he saved his very best until last, showing calm amid the chaos to guide a precise, angled strike across Hugo Lloris and into the far corner in front of the travelling Kopites.

Origi’s drive clinched the European Cup and marked the beginning of prolonged celebrations culminating in the victory parade attended by 750,000 fans the next day.

His legendary status at Anfield is assured.