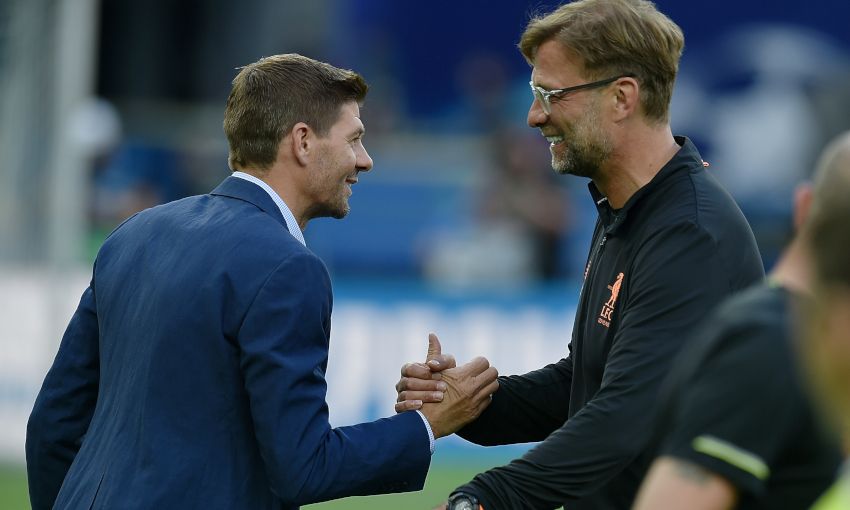 It was an opportunity that never materialised for Steven Gerrard.

But the Liverpool legend cannot help but imagine how it would have felt to play for Jürgen Klopp.

Gerrard departed the Reds a matter of months before Klopp took charge and began a revolution that has brought the club to a second consecutive Champions League final appearance on Saturday night.

“I’ve had many sit-downs with him. He’s an open book – he invites me into his office – I’m incredibly lucky and blessed I do get that invite,” said Gerrard, whose coaching career began at Liverpool’s Academy in 2017.

“And the thing I take away is: Imagine playing for him. I wasn’t lucky enough to play for Jürgen Klopp. Probably too old. Just missed the boat if you like. But, I’m almost jealous of the Liverpool players.

“I come out of his office after a sit-down, and when I walk out of the training ground, I actually want to walk back in and sit with him. I want to put a kit on and play for them, and run for them and run hard. He’s infectious, he inspires you.”

Klopp’s men will meet Premier League rivals Tottenham Hotspur at Estadio Metropolitano this weekend for the right to be crowned European champions.

The analysis from both camps and outside is that the final will be similarly tight as the two league meetings – both won 2-1 by the Reds – were this season.

Gerrard agrees, but the former Liverpool captain believes they are equipped to ensure Jordan Henderson emulates him in hoisting aloft the trophy.

“Those people trying to put Jürgen down, I think all you’ve got to say is, before Jürgen came in they hadn’t been to a European final since 2007.

“Now, he’s put this team alongside the top teams in the world. The Madrids, the Barcelonas — you see him beat Barcelona 4-0.

“It’s a tight game to call, but if both teams play to their absolute maximum, I think Liverpool will just edge it.”