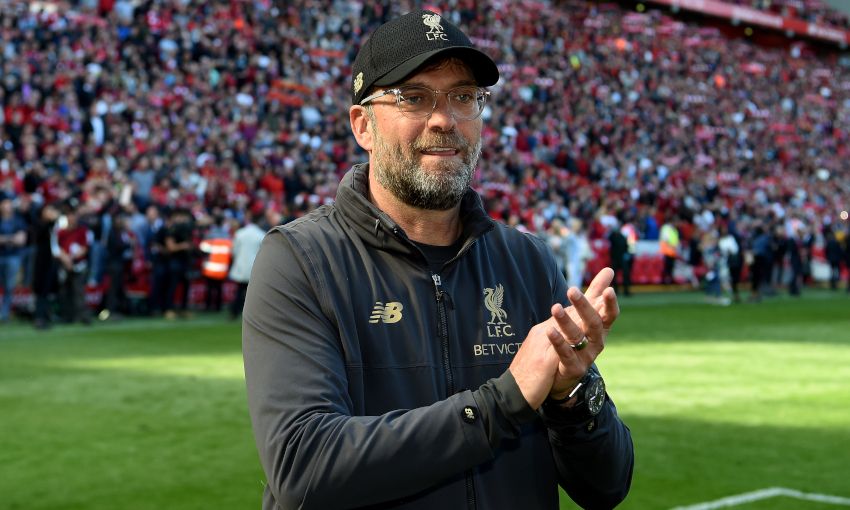 Jürgen Klopp has explained how Liverpool will use a fortnight's 'pre-season' to get ready for the Champions League final in Madrid.

In the aftermath of Sunday’s Premier League finale, which saw the Reds finish second on 97 points following a 2-0 win over Wolverhampton Wanderers, the squad will conduct pre-final media duties before enjoying a short break.

They will then regroup to begin two weeks’ worth of training ahead of the showpiece meeting with Tottenham Hotspur at Estadio Metropolitano on Saturday June 1.

“We have to do a couple of things in preparation for the Champions League [final], media stuff,” Klopp told Liverpoolfc.com of the current plans.

“We have to do that, then the boys will have a couple of days off and then we have two proper weeks as a pre-season for the Champions League final.

“We will do that, we will play that, [hopefully] win it, come home and then the people [would] get what they deserve.”

It was a day of mixed emotions at Anfield on Sunday as Liverpool registered an historic points total with their 30th Premier League win of the season, yet still finished behind Manchester City.

In his post-match press conference, Klopp outlined at length his confidence that the squad will be ready to ‘go again’ in their pursuit of that trophy next season – especially with improvement to come from within.

“Div showed up in a brilliant way, obviously, I’m very happy for him. Ox is coming back, Naby will then finally be there, Rhian Brewster will come, all the young boys if they want to go for it,” said the boss.

“And the established boys can make next steps as well – imagine Trent and Robbo last year [compared to] this year. They were already good last year but it’s another level. Millie is still making steps.

“So it’s really cool to work with this group. And we will go again, I’m pretty sure.”