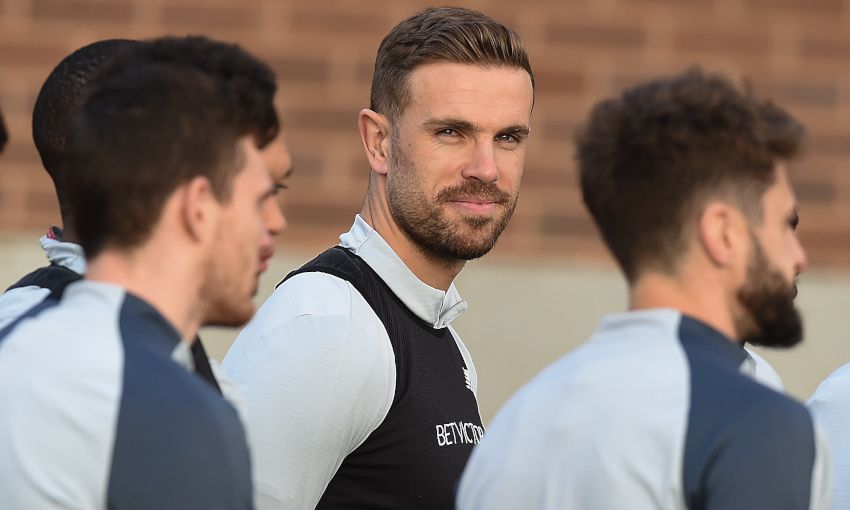 Jordan Henderson highlighted the importance of the 'unbelievable support network' that surrounds Liverpool's players as they prepare to conclude their Premier League campaign today.

The Reds take on Wolverhampton Wanderers at Anfield still harbouring hopes of clinching the league title, while also knowing there is a Champions League final to contest against Tottenham Hotspur in Madrid on June 1.

And Henderson believes none of the feats achieved by the team this season would have been possible without the work of those around them at Melwood and beyond.

He wrote in his column in the official matchday programme: “This is probably the hardest programme column of the season to write, because I don’t want to get drawn into reviewing a campaign that has its most important chapters still to come.

“That said, on behalf of the team I would like to recognise the people who, over the course of a season, go above and beyond for us boys without ever really getting any spotlight themselves. Most of the lads have mentioned this to me, so these are the sentiments of the entire dressing room.

“As players we have the most unbelievable support network around us and without it we couldn’t do what we do. It starts at home with our families and our closest friends. We all know how privileged we are to do what we do and we know the rewards are totally out of proportion with what other people in society get for doing jobs that are far more important than ours. But even factoring that in, purely on a human level, the impact of a season on family and friends is big.

“They live it with us – the highs and the lows. They feel our pain as well as celebrate our success. There’s a reason that, at the end of the game when we go around the Anfield pitch to say thank you to the supporters, that we bring our families with us. They’re part of our team as well.

“In the workplace the staff at Melwood are simply world-class. Honestly, we are so lucky to have these people in our corner. From the gaffer and the coaches all the way through – they are just brilliant people who every day come to work and do all they can to help us.

“From the moment we walk into the place until the moment we walk out, we are looked after. Be it the guys on the gate, the reception, the kit staff and laundry team. Be it the sports science, fitness and rehab experts, the medical guys, the analysts, the recruitment team, player liaison and team management.

“Be it the ground staff, security, admin or the chefs and the canteen workers. It’s everyone who works here. They arrive before us and leave after and although they’d never moan about it, they all make sacrifices in their lives to be part of this. I’ll be the first to admit that as footballers it’s easy to be self-absorbed with your own issues and worries, but the team around us at Melwood are always there for us.

“I hope they know how each and every player in our dressing room thinks the world of them and is appreciative. The truth is that outside of matchdays we don’t spend as much time at Anfield or even the other sites, such as Chapel Street, Kirkby and the club stores, but we do recognise that all the work done by staff at LFC goes to support us.”

Another factor to have had huge influence on Liverpool’s performance levels is the support from the fans, Henderson believes.

He continued: “And of course, as I’ve already alluded to, the supporters. It’s not hard after Tuesday night to talk about their impact. But what they do for us is more than just the special moments. It’s constant. It’s always there and it’s the reason doing this at this club specifically is so rewarding.

“To follow a club like ours isn’t straightforward. The players know for every one fan lucky enough to get a ticket there’s another thousand who’d desperately want one as well. In a time when people across this city and this country have to worry about meeting the everyday costs of living, we know the money they spend supporting us is a sacrifice they make.

“We know that travelling to Newcastle or Madrid is costly and difficult. So, after this game, regardless of what the outcome of the season is, we will walk around Anfield to say thank you, not to receive it. The way we as players see it, in that moment, we’re showing our gratitude and appreciation to you, not the other way around.”