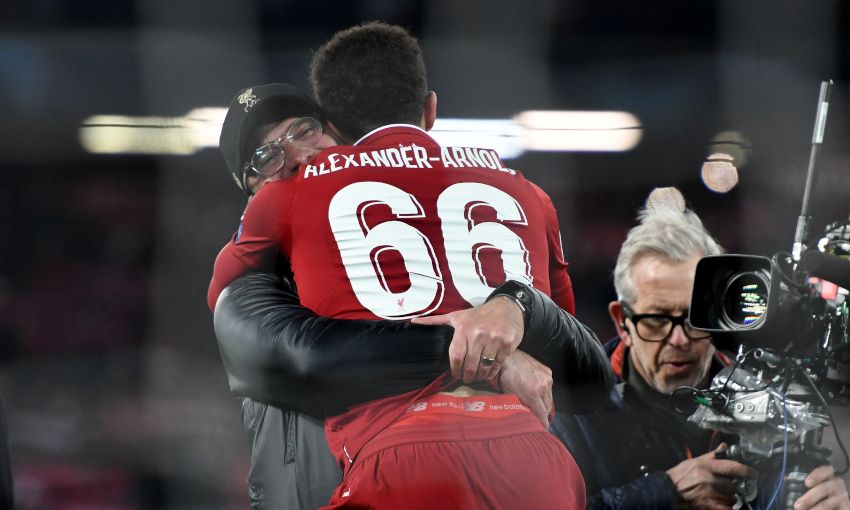 Trent Alexander-Arnold is ready for 'two finals' as Liverpool aim to sign off a remarkable season with silverware.

Having booked their place in the Champions League showpiece with a stunning comeback against FC Barcelona, the Reds now head into the last matchday of the Premier League campaign with hopes of clinching the title.

To do so, Jürgen Klopp’s side must beat Wolverhampton Wanderers at Anfield this Sunday – and Manchester City would have to drop points at Brighton and Hove Albion.

Alexander-Arnold promised the players will be ready to move on from the heroics of Tuesday’s 4-0 win to focus on a positive conclusion to an incredible title race.

“I’m pretty sure it will [go down in Anfield history],” he told Liverpoolfc.com.

“I think anyone who was at the game will say it was probably one of the best atmospheres they have ever witnessed. I think Barcelona were shocked by how good we were, even over there [in the first leg].

“When we play at Anfield we are a completely different team, even better. We have got our fans behind us and it’s an incredible atmosphere, it’s everything really. I think they [Barcelona players] were all shocked really and surprised, and we just took the advantage and punished them.

“It’s tough to take in but we’ve got a job to do on Sunday so hopefully we’ll see what happens. We’ve done everything we can this season to try to bring success. We have two finals left now and it’s important for us to give our all in these two games.”

Trailing by three goals from the opening meeting at Camp Nou, Liverpool produced a performance bristling with power and intent to register the four unanswered strikes they needed to take an aggregate lead.

Alexander-Arnold chipped in with two assists during an impeccable individual display, but the No.66 was keen to direct praise to the Reds’ scorers on the night.

Divock Origi came into the team and bagged the crucial first and fourth goals, while substitute Georginio Wijnaldum netted a double within 11 minutes of coming on at half-time.

“You’ve got Divock who hasn’t played that many minutes this season and he’s come up with two goals,” said Alexander-Arnold.

“You’ve got Gini who was a sub; he would have been angry, disappointed and gutted to not be starting in probably the biggest game of the season. But he showed he was ready, coming on at half-time and within 10 minutes he had scored two goals and he equalled the tie for us.

“It just goes to show that you can’t be too disappointed and be ready for your chance when it comes because more likely than not you are going to get that chance whether it be Barcelona or anyone really.

“You’ve just got to be ready and those two lads were, luckily for us, and they’ve put themselves in history and the modern day legends already, just for that game.” 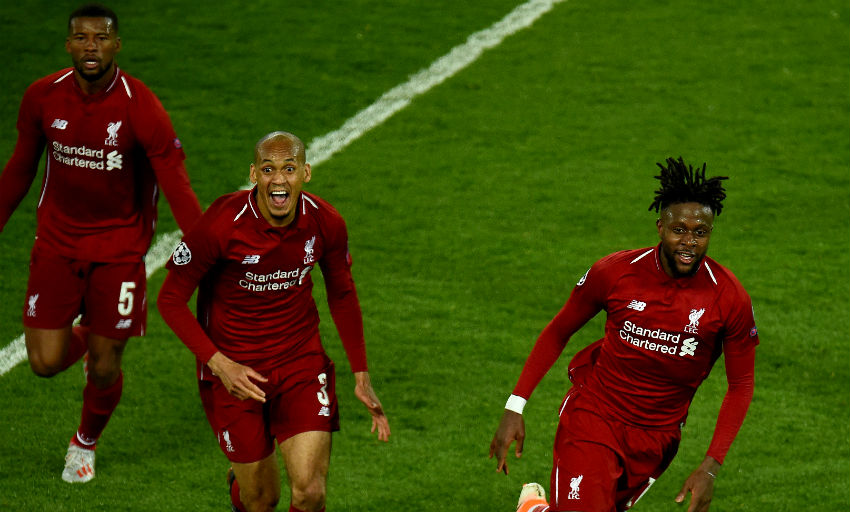 Tottenham Hotspur followed up Liverpool’s turnaround with one of their own in Amsterdam 24 hours later to join the Reds in the final in Madrid on June 1.

Mauricio Pochettino’s team needed three away goals in the second half of the second leg against Ajax and completed the objective six minutes into stoppage-time.

“We know each other, we have beaten them twice this season so we’ve got to go into it with a bit of confidence, but they will have confidence and we will from our last Champions League games. We both had two unbelievable comebacks so I’m sure it will be a good game.”