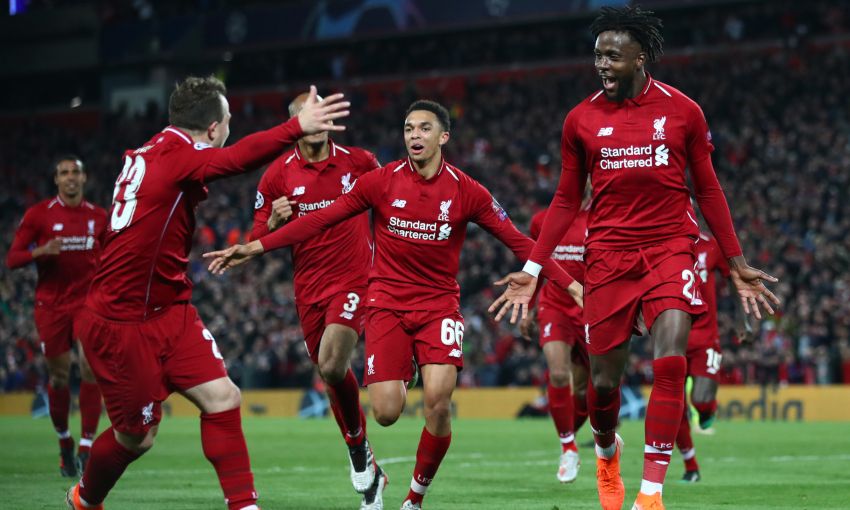 Trailing 3-0 from the opening encounter in Spain six days ago, the Reds’ hopes of overcoming the Spanish giants on aggregate were alive, yet slim, at kick-off.

But Jürgen Klopp’s remarkable team achieved what many considered impossible courtesy of two goals apiece from Divock Origi and Georginio Wijnaldum on a scarcely believable night in L4.

And so Liverpool will contest a second successive Champions League final, facing the winners of the other semi-final between Ajax and Tottenham Hotspur in Madrid on June 1.

Forced to reshuffle his pack in the absence of Roberto Firmino and Mohamed Salah, the manager made four changes in total: in came Joel Matip, James Milner, Origi and Xherdan Shaqiri.

Barcelona were unchanged from the first leg at Camp Nou, with Philippe Coutinho and Luis Suarez back at Anfield to face their former team.

There have been many frantic halves of football at Anfield through the years and the opening 45 minutes here could match most that have gone before, with its basketball-style nature and relentless pace establishing a war of attrition.

The game wasn’t a minute old when Liverpool threatened for the first time, Sadio Mane’s delivery from the left helped on by Shaqiri and cleared at the back post before Jordan Henderson could pounce.

But the Reds did not have to wait long to turn hope into opportunity.

Only seven minutes, in fact, had elapsed when Mane seized on a slack pass and fed Henderson, whose force of will took him into the box and allowed a left-footed shot that was parried out by Marc-Andre ter Stegen and knocked in by Origi. 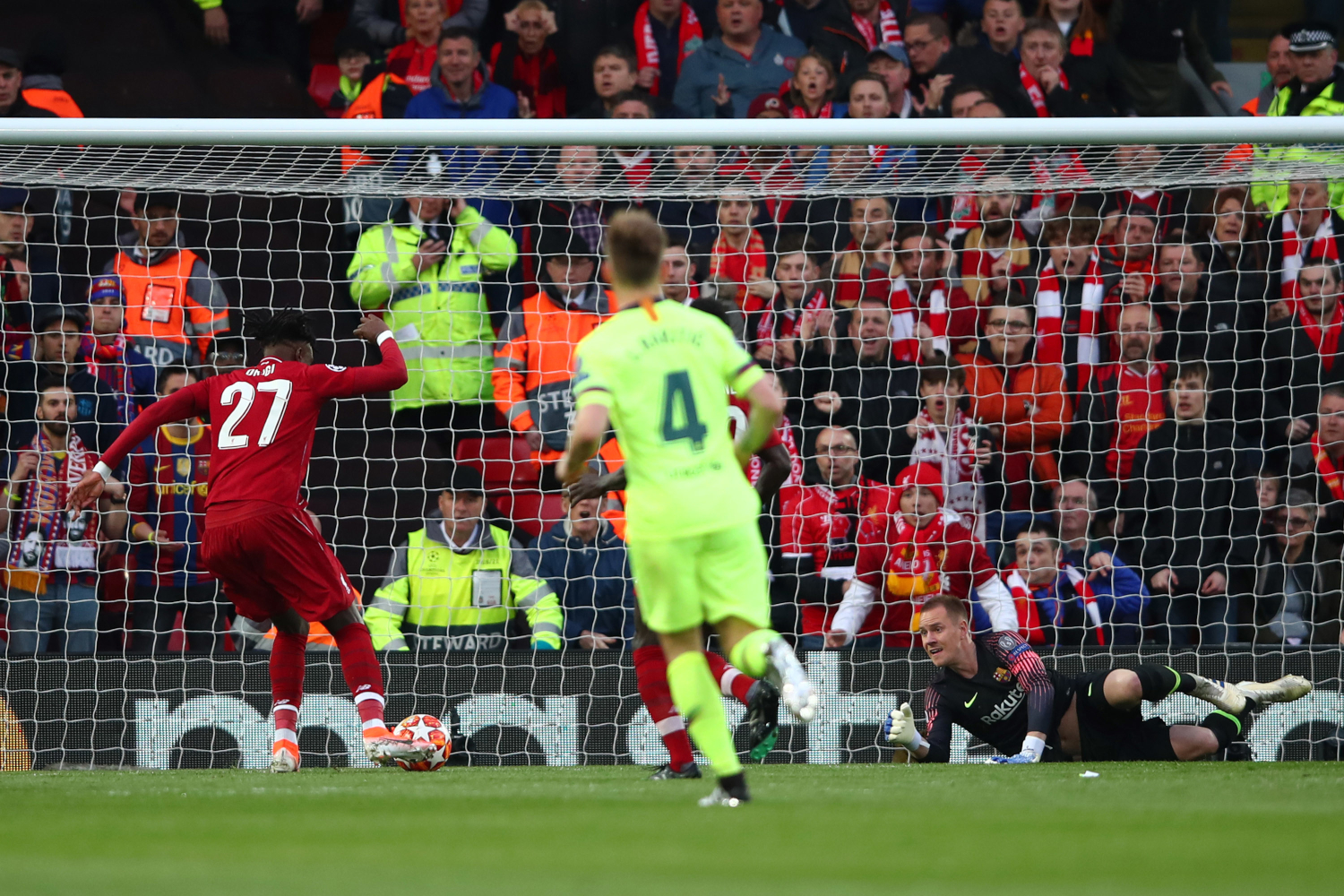 It was the first real blow landed in a punishing contest, one played out against a cacophony of encouragement, intimidation and ambition.

Mane’s claims for a penalty, having tumbled under pressure from Sergi Roberto on a scamper in from the left, were rejected and at the other end, Alisson Becker tipped over a Lionel Messi curler.

The Liverpool goalkeeper produced an even better stop soon after, as a Barcelona breakaway sprung three in the Spanish champions’ luminous colours against two Reds defending the Kop.

Coutinho ultimately swept Messi’s pass towards goal from the left side and Alisson met it with firm hands to both save the effort and ensure Suarez could not capitalise on a rebound.

Ter Stegen was next called into action to block an Andy Robertson blast from the angle before the Reds left-back followed Henderson in shaking off a knock to continue.

Barcelona’s efficient use of the ball was a repetitive warning amid the hosts’ constant pressing and it was the visitors who threatened twice in quick succession in first-half stoppage-time.

Messi dragged a low shot narrowly wide and then picked out Jordi Alba’s sneak into the Liverpool box – but Alisson was off his line rapidly to repel the full-back’s attempt with a sprawl. 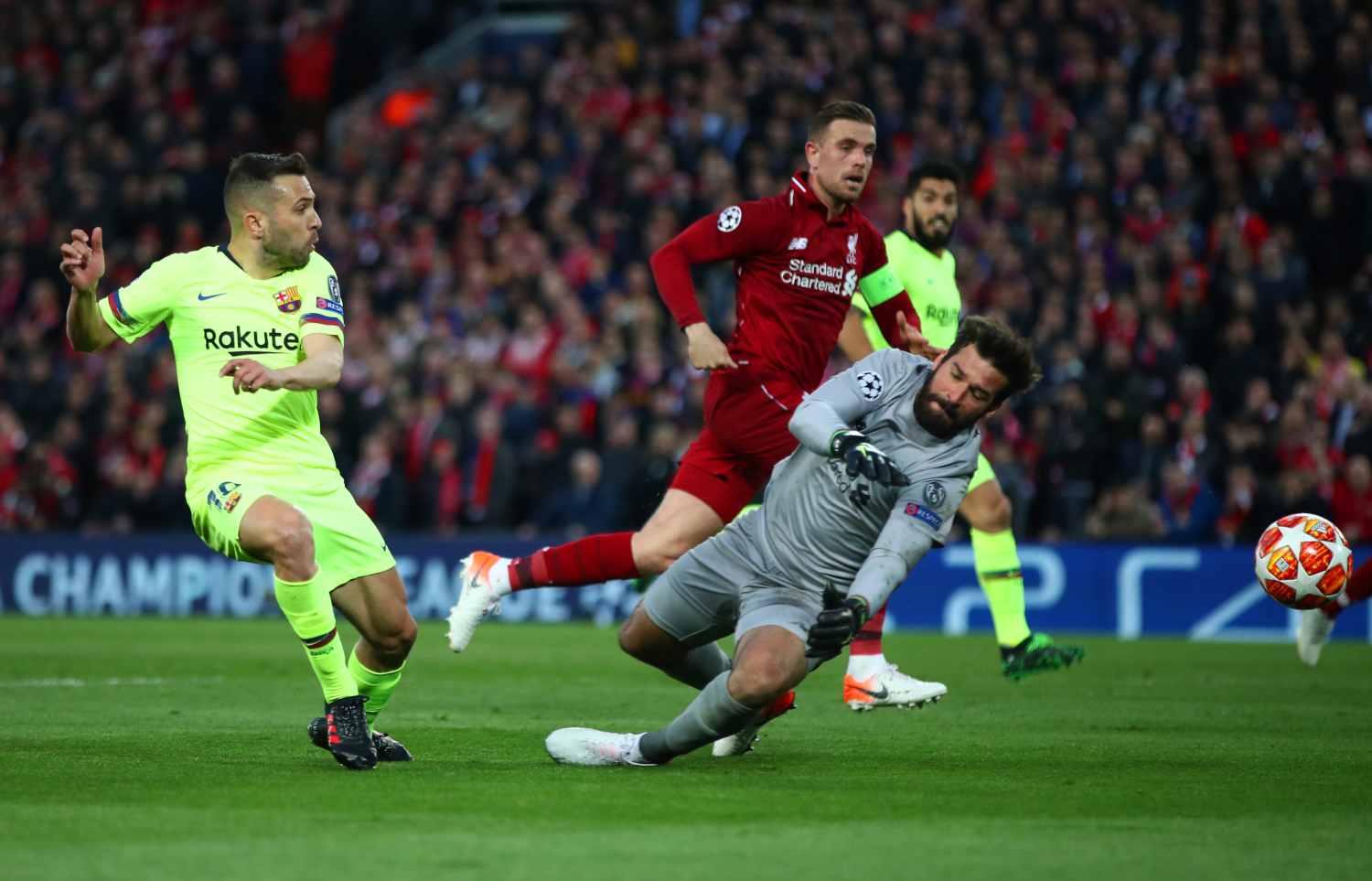 Robertson’s injury meant he did not return to the pitch for the second half – Wijnaldum replaced the Scot and Milner moved to left-back.

Virgil van Dijk was close to doubling Liverpool’s lead on the night with a close-range flick from Trent Alexander-Arnold’s corner that Ter Stegen reacted brilliantly to thwart.

Within seconds, Alisson was tested by Suarez, the Uruguayan breaking free in the right channel and rolling a low finish across goal that the No.13 clawed away.

It was a pivotal turning point in the match and the tie – and perhaps, still, club history – because, soon, 122 seconds of action unfolded that will take a cherished place in Anfield folklore.

Alexander-Arnold’s determination down the right reclaimed possession and the Scouser’s low cross reached the arriving Wijnaldum in the middle for a prod at goal that got through the grasp of Ter Stegen.

Two minutes later, it was – incredibly – 3-0, this one coming via the opposite flank: Shaqiri lofted cross, Wijnaldum unstoppable header into the top corner, Anfield pandemonium.

A more natural rhythm returned to the game once the chaos of the quickfire double eased and Barcelona steadily found a foothold, Alisson having to push away a Messi punt at the near post after a clever corner routine.

But it was a sublime set-piece of Liverpool’s own that settled the tie in their favour – Alexander-Arnold’s quick thinking catching Barcelona unaware and teeing up Origi to hammer in the most priceless goal of the season.

The Reds are in the Champions League final – again.