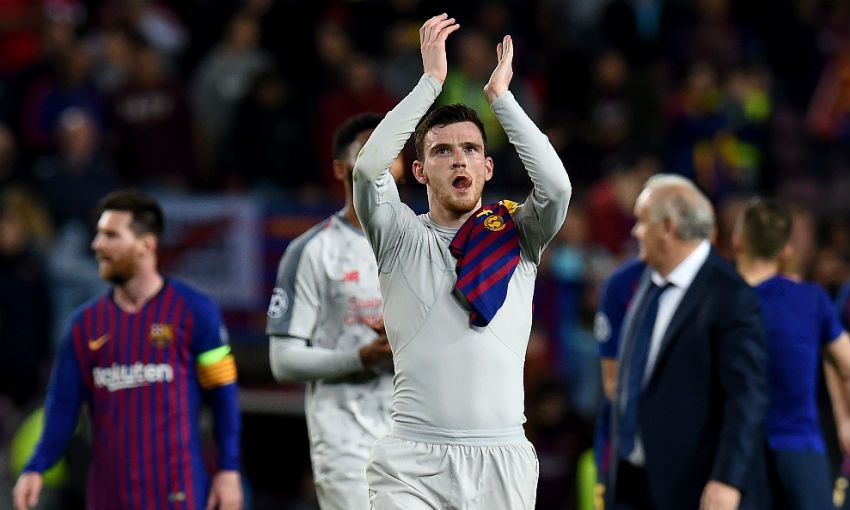 Showing a response to setbacks and believing anything is possible are two obvious necessities in being a Liverpool player, Andy Robertson has pointed out.

The Reds were beaten 3-0 by Barcelona on Wednesday night in the first leg of their Champions League semi-final, with the tie returning to Anfield next week.

But before that, Jürgen Klopp's side travel to Newcastle United in their penultimate Premier League match of the season.

Asked about the importance of bouncing back, Robertson told Liverpoolfc.com: "We’ve got no other options.

"We’ve got three, hopefully four, games left this season, and we need to give it everything, 100 per cent, in every single game because we know what’s at stake.

"We know both of them are out of our hands now but look, it’s Liverpool - we fight for everything and we believe.

"We need to go to Newcastle, get our legs ready first and foremost and they are in a great run of form, so we need to be at our best there and then we can worry about Barcelona. But our focus is now on Newcastle."

In line with his manager's post-match comments, Robertson did highlight some positives to take from Liverpool's display at Camp Nou.

The visitors enjoyed lengthy spells of control against the Spanish champions and created a number of goalscoring opportunities.

"We dominated large periods of the game, especially at the start of the second half," the No.26 added.

"Their fans were booing them, players were getting booed off. We had them where we wanted them, which is exactly the kind of atmosphere you want to create when you are the away team. Then they go and create and the second goal is just so lucky in my opinion. Hopefully we get the rub of the green next week.

"We had the chance to score and 3-1 is different but look, these are things we’ll be lying in our bed thinking about tonight. But we need to dust ourselves down because we’ve got a huge game on Saturday and we need to be ready."