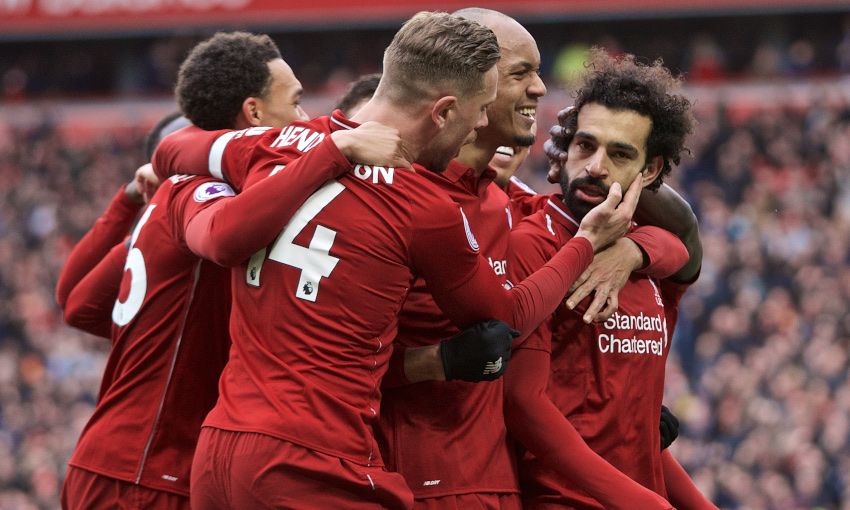 Liverpool maintained their position at the top of the Premier League table with a 2-0 victory over Chelsea at Anfield on Sunday.

After a goalless first half, Sadio Mane headed the Reds into the lead six minutes after the re-start from Jordan Henderson’s excellent stand-up towards the back post.

Mohamed Salah added a second moments later, finding the top corner with a sensational long-range strike that arrowed across goal and into the net.

The result means Liverpool again end the weekend at the summit of the division, leading by two points albeit having played a game more than Manchester City.

The teamsheet showed two changes from the midweek victory over FC Porto for Liverpool, with Andy Robertson and Joel Matip replacing James Milner and Dejan Lovren in defence.

Ahead of kick off, Anfield paid its respects to both Tommy Smith, who sadly passed away on Friday, and -  on the eve of the 30th anniversary of the disaster - the 96 children, women and men who lost their lives at Hillsborough.

With Jürgen Klopp taking charge for the 200th time in all competitions, Liverpool got the game under way knowing only a victory would return them to the summit of the Premier League table after Manchester City’s 3-1 victory over Crystal Palace earlier in the day.

And the Reds set about making a positive start to the contest, with Salah having his snap-volley from Mane’s cross saved by Kepa Arrizabalaga after six minutes.

The hosts had seized early control, though Eden Hazard showed a glimpse of his considerable threat when he wriggled into space and had a low effort saved by Alisson Becker at the near post.

Next, Henderson’s goal-bound strike from just outside the area deflected off the boot of David Luiz and behind, while Willian cracked wide of the post for the visitors after a surge forward on the break.

On 38 minutes, Liverpool fashioned an opening for Mane when Salah sped down the right and pulled it back for the No.10; however, his first-time swipe curled wide of the upright.

The Blues lost Antonio Rudiger to injury shortly after, with Andreas Christensen replacing the defender.

In the final moment of the half, Kepa denied Roberto Firmino’s touch from Trent Alexander-Arnold’s in-swinging free-kick with his foot, though the Brazilian was deemed offside by the referee’s assistant as the half concluded without a goal.

Any sense of frustration at not breaking the deadlock in the first period were blown away at the start of the second half in 142 seconds as Liverpool established a two-goal advantage.

It was Mane who opened the scoring, heading in at the back post after Henderson and Salah had combined in the area, allowing the former to stand a ball up over Kepa.

Then, Salah had Anfield in raptures when he took aim from 20 yards and found the top corner with an arrow of an effort from the right.

Chelsea went close to forcing their way back into the game when Hazard collected a pass over the top from Luiz and rolled an effort beyond Alisson, though thankfully it struck the base of the post.

The Blues No.10 then brought a smart stop out of the home goalkeeper, hooking goalwards from a cross to the near post.

Liverpool were forced to replace Henderson with 15 minutes remaining after he sustained a knock. James Milner was dispatched from the bench, with Georginio Wijnaldum having earlier taken the place of Keita.

But the Reds had already done enough to claim the points as their dreams of clinching Premier League glory remain firmly alive with just four games now remaining.