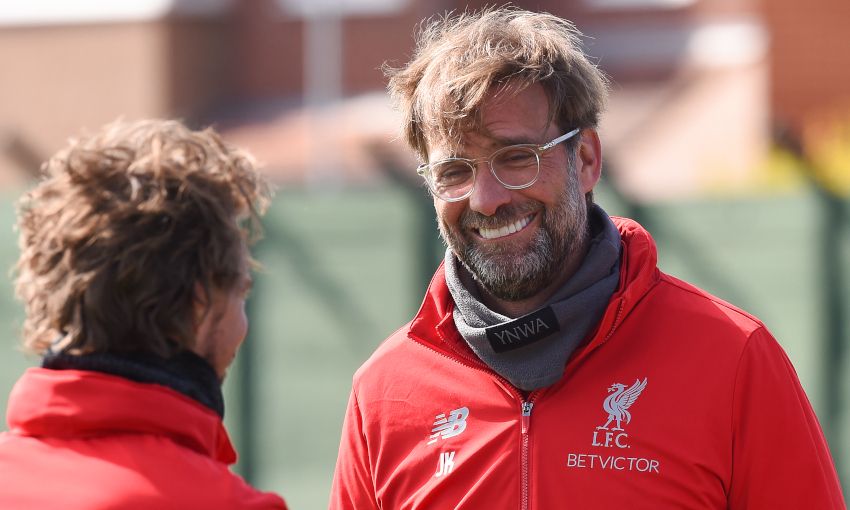 Jürgen Klopp sees Liverpool's Premier League clash with Chelsea as another opportunity for his side to write their own history in the title race.

The Reds host the Londoners on Sunday in the latest chapter of their relentless battle with Manchester City to claim English football’s top prize.

It was a similar story five years ago, when Chelsea dented the club’s ambitions on that season’s trophy by securing a 2-0 result at Anfield.

But Klopp rejected any suggestion that match has bearing on this weekend’s fixture, with a ‘completely new’ set of circumstances in play.

Read the manager’s thoughts on the game below…

On the match against Chelsea in 2014…

I’m not sure if that’s in anybody’s mind, apart from you. I didn’t think a second about it; I heard about that incident. It’s a completely new story. Things happen once in a lifetime, sometimes twice and sometimes never. It’s all about the game on Sunday, it has nothing to do with any games before. I don’t know how many Chelsea players are still involved, maybe a couple from my team. Everything changed, only the colours and names of the teams are the same, pretty much. I’m completely positive about the game, not about the result – because I know we have to work really hard for it.

I liked the game on Tuesday night – the start in the game, the direction we had and all that stuff. There were so many good moments in this game that showed we are really in good shape. We have to be in good shape in this moment because we have really big targets, that’s clear. But we are. And that’s what we have to show again, we have to really fight for it and not think about it.

Anybody who wants to talk to any of my players about what happened I don’t know how many years ago: don’t do it, just forget it. We want to write our own history. If we do that, you can only build on the positives of the past and learn from the negatives of the past. But don’t try to avoid the mistakes of the past because that always leads in the wrong direction. We have to do it really positively, really front-footed; that’s how we did it the whole season and hopefully we can do that on Sunday again.

On the danger of Eden Hazard…

On his day, he can be the world’s best immediately. He had a brilliant career, 100 per cent, so far and it’s not over yet. He has a lot of things I like in football; I like his joy, he is kind of cheeky as well, strong, quick. He is a good player. Like all good players, they have to play against us and we’ll try everything to deny at least a couple of his skills. That would help us obviously.

The best way to try to make sure he cannot shine as he is able to is to avoid passes to him, react a little bit better maybe than other teams did. I don’t say it’s easy, I really don’t, because when he has the ball it’s already pretty much late. We have to try to read the game, read the passes and stuff like that. There are a couple of things to do. At the end, in a one-on-one situation you can’t defend him – help should come from somewhere else. I like footballers like this. If he plays his best game, we’ll have to deal with that. If we can make sure they cannot play as good as they usually do, it’s good for us.

On his team thriving on the emotions of the title race…

We tried from the first day to play the best season we are able to play. We didn’t compare it to any other season. We hoped we could go to the next level; that’s what happened from time to time, consistency-wise for sure, defending-wise in a lot of moments, a lot of things improved. We don’t compare it. I’m not nervous. I feel the intensity of the competition and it’s good. In this moment, we see the positivity of the moment. But we never rested there, we always have to make the next step because it’s not over yet.

We are very positive about it – the boys are positive, the training sessions are positive, but still it’s so difficult. If you want to go through without difficulties, you have no chance. Whatever we can do to encourage the players, with all the things we do during the week, we try to encourage them to play the biggest balls football, if possible, to really try everything. The nice thing about this game is that it’s absolutely not possible to play without mistakes. So you don’t have to worry about them, you only have to deal with them. We will make mistakes on Sunday, 100 per cent. We have to deal with it, we have to sort it, we have to help each other. And then we can win a football game.