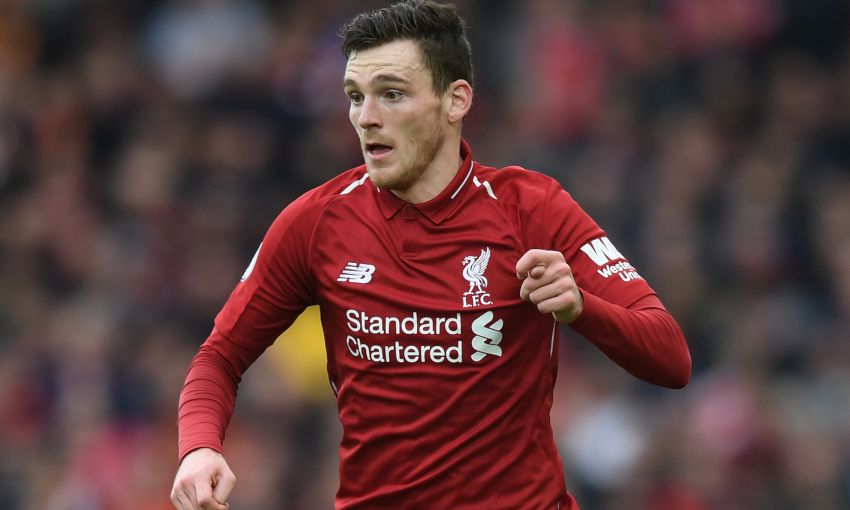 Liverpool will welcome back Andy Robertson for Sunday's Premier League showdown with Chelsea at Anfield.

The left-back sat out the Champions League win over FC Porto earlier this week due to suspension in that competition but is set to return against the Blues.

Sadio Mane (thumb) and Georginio Wijnaldum (back) are expected to shake off minor issues to be available for the 4.30pm BST kick-off, according to Jürgen Klopp.

An appearance for Wijnaldum would be his 100th in the Premier League for the club.

At his pre-match press conference on Friday, the manager discussed his increased options at centre-back.

Dejan Lovren came into the Reds XI on Tuesday night for his first start in three months, while Joe Gomez – who is back in training after a leg fracture – was a late addition to the substitutes’ bench.

“As long as the other boys are all fit and stuff like that, we can give Joe the time to train and maybe get some match practice in some other games – we will see how we can do that exactly, I’m not 100 per cent sure. But we will need Joe in the last part of the season.”

Klopp added: “We have a choice to make [in central defence].

“That means everybody needs to show in training or in the games what gives us the biggest opportunity or possibility to win the next game – that’s all what I think about.”

“In my opinion he needed to rest. In this match he was out,” the Blues boss said of Hudson-Odoi after that game.

“Emerson was also out. Of course he is in my mind for the next match, but I have to see the last two training sessions.”

Chelsea have already claimed a win at Anfield this season – Eden Hazard’s goal secured a 2-1 result and eliminated the Reds from the Carabao Cup in September.

Sarri said: “To face Liverpool is going to be difficult for us but every game now is difficult.

“Liverpool are one of the best teams in England right now, they reached the final of the Champions League last year, and at Anfield it is always difficult.

“We know well the risks of this match but we also know that when we are able to play at 100 per cent of our potential, we can gain points anywhere. We are in a very good physical and mental condition right now.”