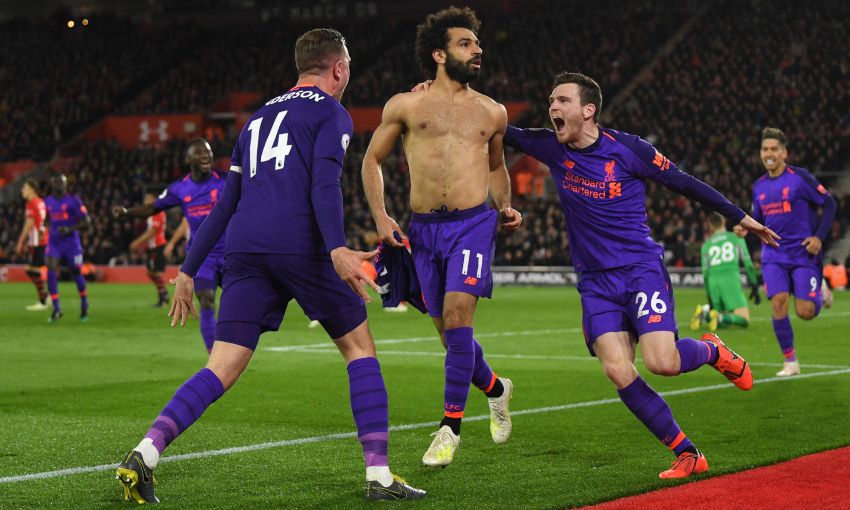 Jordan Henderson has praised the contribution of Mohamed Salah to Liverpool's season so far after the No.11 notched his 50th Premier League goal for the club at Southampton on Friday night.

The Egyptian reached his half-century with a wonderful solo goal in the 80th minute at St Mary’s that put the Reds in front on their way to a 3-1 success.

It means Salah’s overall tally for the club stands at an astonishing 65 strikes in just 95 appearances in all competitions since his transfer from AS Roma in June 2017.

Henderson wrote in his column in the official matchday programme: “I have to admit it made me smile to hear and read after the Southampton game that Mo Salah has ended his ‘drought’ when he scored our second goal.

“In fairness to the ‘Egyptian King’ he made a good point in the live post-match TV interview by pointing out how many games I’d had to wait for a goal. Even though the joke was at my expense I loved that he wasn’t having it and gave a little nibble back at the premise of the question.

“The goal was a landmark one for Mo because it took him to 50 in the Premier League for our club. I saw afterwards that he achieved it in less games than it took Torres, Suarez and Fowler. That’s some list of players and the biggest tribute you can pay Mo is that he absolutely belongs in that company.

“Even though it was a significant goal for him personally, the best thing about Mo is that it would have been the result that mattered so much more to him on the evening. You could see that in his celebration. Like all of us he knew what an important goal that was for the club and our ambition of winning the game and going back to the top of the table.

“I’m not naive enough to ignore the fact that for goalscorers and strikers the numbers do matter – in the same way our ‘keeper and defenders will take pride in clean sheets and Robbo and Trent do in assists this season. But if anyone on the outside thinks a single player in our dressing room is more interested in personal achievements over the team’s they are massively mistaken.

“During the period he hasn’t been scoring Mo has played some of his best football for Liverpool in my opinion and his contribution has been even bigger than last season. He’s evolved so much since he arrived here and brings so much to our play.

“You saw how we reacted as a team to his role in the winning goal against Spurs – and if I was on the Premier League panel I’d have definitely awarded it to him! But in a way it said it all. Mo was delighted to have played a big part in us getting such an important win and we were all massively appreciative of what he did. He didn’t need to be credited with the goal for us, his teammates, to recognise his value.

“I think I’m right in saying he’s bagged 21 goals this season, which by the way is absolutely massive coming on the back of what he achieved last season. That’s 65 goals for us overall in almost two seasons – a genuinely staggering figure. Throw in the number of assists too and it tells you everything about what he brings to this team.

“But if you ask all the other lads they’ll tell you the same thing: what Mo gives us can’t just be measured in the goals he scores himself. It’s the same for the entire front three actually – neither Sadio nor Bobby bagged against Southampton but both were absolutely outstanding from start to finish and made a massive difference.

“The three are the epitome of ‘team players’ – they work, they graft, they give everything to help the team win. And they’re all, obviously, world-class forwards.

“I’ve no idea how many Mo will end up with when the season finishes, except to say I’m pretty confident it’ll be more than he has now – but, to be honest, it doesn’t matter. The number that matters to all of us is our position in the Premier League when 38 games are done and the end outcome in the Champions League. And for Mo, his aim is to get us as close to achieving our aims as possible, in any way he can.”