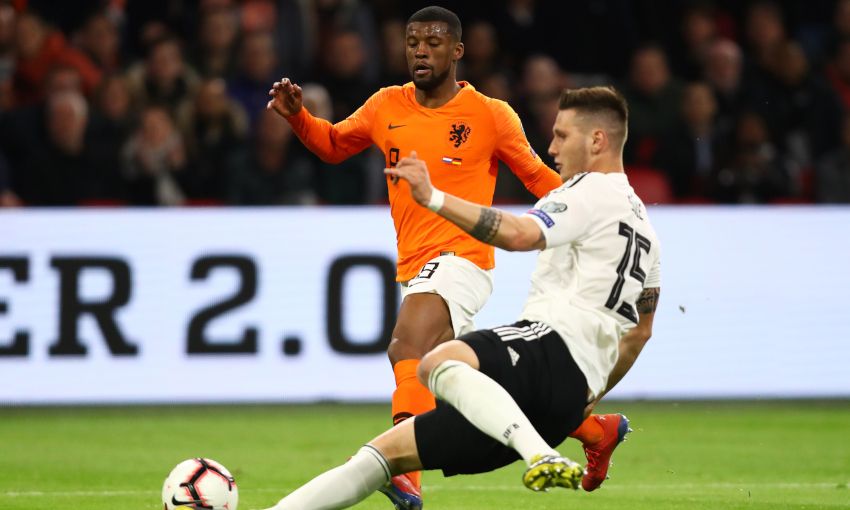 There were mixed fortunes for the Liverpool players in international action on Sunday.

Virgil van Dijk and Georginio Wijnaldum were part of the Netherlands team who recovered from a two-goal deficit but lost 3-2 to Germany in their Euro 2020 qualifier.

Both played the full match and Wijnaldum had a hand in the equalising goal for the Dutch, teeing up Memphis Depay to find the bottom corner and level the game.

However, Nico Schulz struck in the last minute to snatch victory for the visitors in Amsterdam.

Dejan Lovren was on the losing side in the preliminaries for next year’s tournament, too, the centre-half completing 90 minutes in Croatia’s 2-1 defeat against Hungary.

There was a win for Andy Robertson, though, the Reds left-back captaining Scotland to a 2-0 result at San Marino in Group I.

Simon Mignolet and Divock Origi were unused substitutes for Belgium, who eased to a 2-0 success over Cyprus in Nicosia.

Ben Woodburn also remained on the bench, as Wales claimed a 1-0 win over Slovakia in their opening Euro 2020 qualifier. Harry Wilson, on loan at Derby County from the Reds, featured for 87 minutes in Cardiff.

Caoimhin Kelleher kept a clean sheet for Republic of Ireland U21s in a 3-0 win at home to Luxembourg in European Championship qualifying.

And there was special recognition for Curtis Jones as England U18s wrapped up their participation in the UAE Sport Chain Cup in Dubai as runners-up.

The 18-year-old claimed an assist and then scored what proved to be the winning goal in a 3-2 victory against Mexico, before being named Player of the Tournament.

Rhys Williams started the game but was sent off for two late bookings, while Bobby Duncan was introduced for the second half.