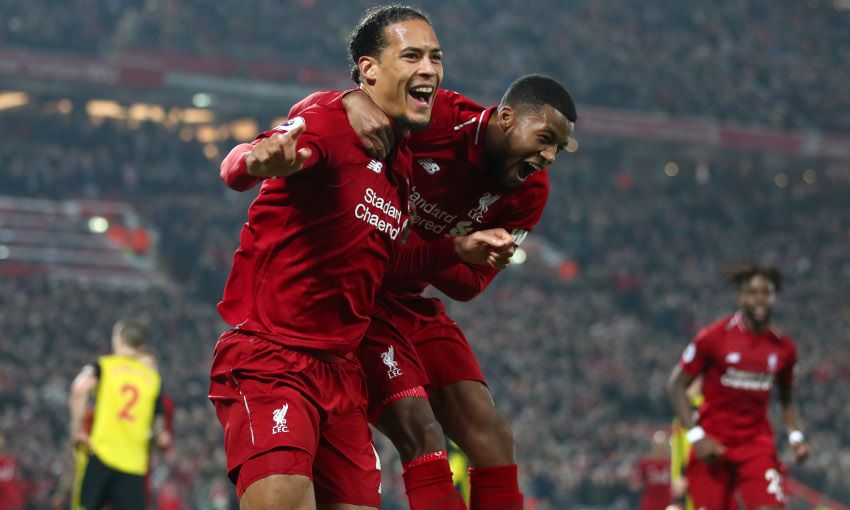 The variety in the manner in which Liverpool are scoring goals is giving the squad extra confidence going into games – and making Virgil van Dijk a ‘happy man’, Georginio Wijnaldum has revealed.

The Reds have found the back of the net from set-piece situations more frequently in recent weeks, including one in the 3-1 win over Bayern Munich at the Allianz Arena in midweek.

That effort came via a thumping header from Van Dijk, which was his third goal in his last four games.

“It gives more confidence to the team because it gives us more opportunities to score. In the last few games, we’ve scored quite a lot with the set-pieces – and Virgil is a happy man because he’s scored a few!

“It is good if you have those qualities and you’re aware of them. We’re aware of our qualities we have, so we try to use them in every game.

“It is really important and it helps the team, but it doesn’t matter who scores or who plays good, it is just good if someone scores. Most of the time it is the front three, but now also Virgil is scoring, Trent can score and Robbo is getting closer.

“It’s always good if more players can score other than the front three to help the team.”

Van Dijk’s intervention in Munich was the latest significant contribution the centre-back has made since arriving at Anfield from Southampton in January 2018.

The No.4 has established himself as one of world football’s elite defenders – but Wijnaldum isn’t surprised in the slightest.

“I already saw it [coming],” he said. “I had thought about it because I play with him for the national team, I had seen him make steps and progress a lot during the years.

“He has had a big impact since he came in and has helped the team a lot, so I think he was a really good signing for us.

“He is a big character, a person everyone loves. Everyone loves him in the dressing room, at Melwood and the fans love him. We’ve made a step forward with Virgil in the team.”

The emphatic manner of Liverpool’s win over Bayern was cause for celebration among supporters.

But what was it like inside the Reds’ dressing room at the Allianz?

“The team is in really good shape right now, plays good games and we play good as a team, so it makes it easier for all the players to perform – including me. It’s going quite good right now.”