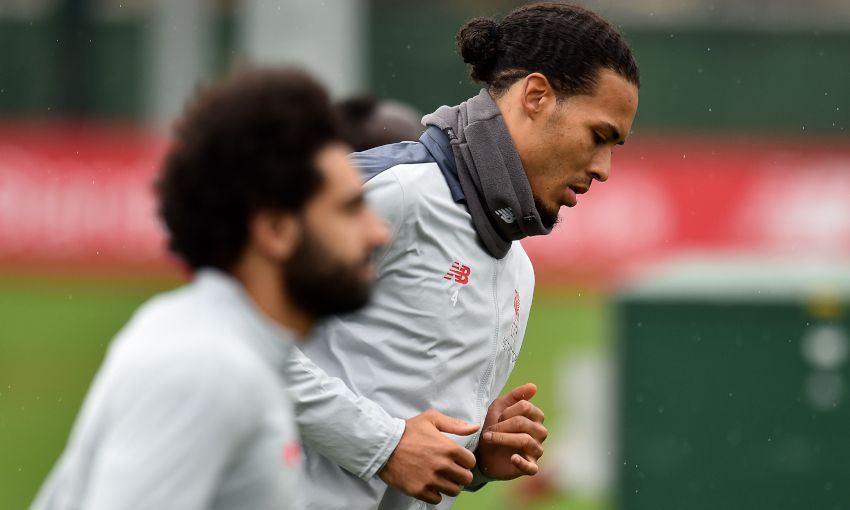 Virgil van Dijk explained Liverpool's reaction to changing positions in the Premier League table with Manchester City is one of calmness with nine games still left to contest in the race for the title.

The Reds’ goalless draw with Everton at Goodison Park last Sunday meant they ended the weekend in second place in the standings, one point behind Pep Guardiola’s side – the first time since December Jürgen Klopp’s men had not been stationed at the summit of the division.

However, with effectively a quarter of the league term still to be played, Van Dijk insisted remaining cool is the best way for Liverpool to continue to go about their business, starting against Burnley at Anfield on Sunday.

Asked what the players’ reaction to moving to second in the table is, the No.4 told Liverpoolfc.com: “Stay calm. Personally, I am always calm because you can’t get influenced by the media or by fans from different clubs or what else.

“You just need to stay calm. There are nine games left and anything is possible. I think a lot of people forget [there’s a quarter of the season to go]. One point is not a lot, but it is something because it’s Man City. We’ll see.

“The next challenge for us is Burnley and it’s going to be a tough one, so we’ll see after that how it is going to be. We have Champions League coming up, we have the international break coming up, so there are so many things that can change over the time. We’ll see what it brings us.

“It’s very important [to get a win against Burnley]. At this stage, it’s the most important thing – to get the three points. It doesn’t really matter how, but we want to show good football as well.

“That’s what we’re going to try but if that doesn’t work, we’ll try with hard work and hopefully be able to get the points.”

Van Dijk knows picking up a victory over Burnley will be easier said than done, given the Clarets’ recent form – which includes a 2-1 win over Tottenham Hotspur at Turf Moor.

Indeed, Sean Dyche’s team have lost just one of their last five away games in the Premier League.

“We know how tough they can be,” the Netherlands captain considered. “When we played them away, it was a very difficult game.

“They’re very direct, with a lot of hard work, they put good pressure on opponents, so it’s going to be tough – but we want to show why we’re in this race and make sure we’re going to be more than ready to give everything for the three points.

“Burnley deserve all of the respect they get because they are a good team, they work hard, the manager has a specific way of playing that suits them very well, so it’s going to be very tough.

Kick-off for Sunday’s clash is set for midday, but Van Dijk is hoping Liverpool supporters can produce similar atmospheres to the ones generated in the recent home fixtures with Bournemouth, Bayern Munich and Watford.

Indeed, the 27-year-old has outlined just how Reds fans can positively impact what unfolds on the pitch with their backing.

“I would say to them bring your A-game as well, just like we have to bring our A-game,” Van Dijk replied when asked what he’d say to supporters attending the Burnley clash.

“We want to give everything we’ve got, especially in these last nine games. We’re in a position not many clubs are in so we just need to enjoy it, all of us. Like everyone knows, the help of the fans, the atmosphere, helps us so much. They’ve been showing it throughout the whole season and hopefully we can show it on Sunday as well and help us get the three points.

“We need every one of you – and everyone that supports Liverpool – to be ready and also sometimes be a little bit patient and not get frustrated. We have to be patient at times because it is not easy to break teams down, but I think the last game we played at home against Watford the atmosphere was outstanding. And in the game before that, it was very good as well against Bournemouth – unbelievable.

“We have to keep that going. For us, we have to get results and make sure the performances are good, then we will see.”