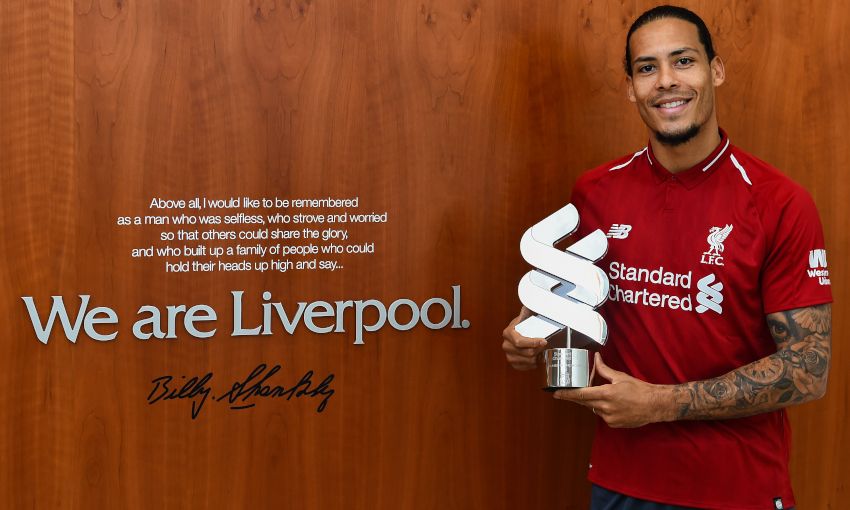 Virgil van Dijk was today named the Standard Chartered Player of the Month for February.

The centre-back pipped Sadio Mane and Mohamed Salah to clinch the prize for a second time this season after helping Liverpool keep clean sheets in three of his four appearances, as well as chipping in with two goals.

Upon being presented with the award at Melwood on Thursday, Van Dijk told Liverpoolfc.com: “It’s always special to recognition from the fans, but as I've said before, without all of my teammates and the staff, I wouldn’t be able to perform like this. All credit goes to them as well.

“100 per cent [it’s about the collective]. It was a bit of a tough month for everyone, we didn’t get the wins that we wanted, but we kept clean sheets and kept it tight - all of us together, defensively. We were a little unlucky offensively, so that was February for us.”

After completing the 90 minutes in Liverpool’s 1-1 draw at West Ham United at the start of February, Van Dijk and his teammates secured shut-outs against Bournemouth, Manchester United and Watford.

The Netherlands captain has tallied 35 appearances in all competitions so far this season, but added: “I feel good.

“It’s been a tough year so far with a lot of games, but I am enjoying every bit of it and we are in a race – a special race – for the title with Manchester City, who are having an outstanding season as well. I am enjoying it, I feel good.”

Offensive play is something the No.4 ackowledges he has been working on at Melwood as he aims to increase his threat in opposition penalty boxes.

“The goals were an extra bonus,” Van Dijk said. “It had been a while, especially at home where I didn’t score after my goal against Everyone on my debut.

“To get two goals was great stuff. I have been working on it and it’s something I need to keep working on. It’s always good to have things to improve.”