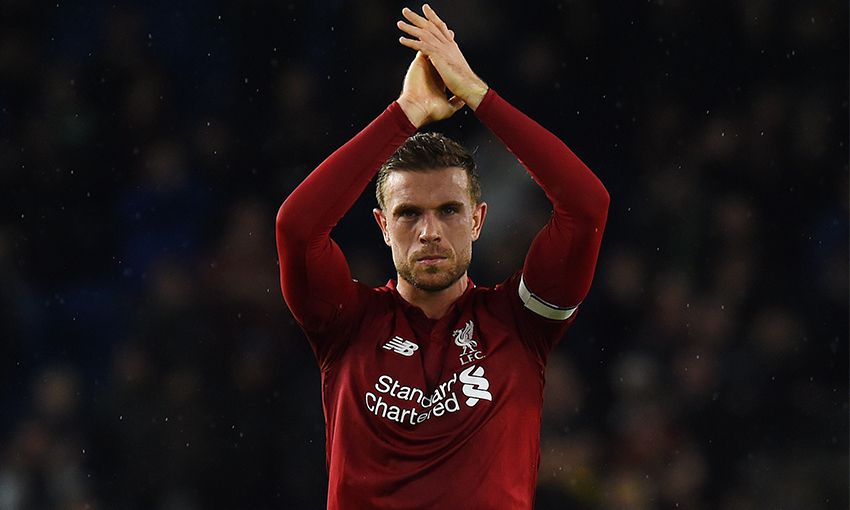 ‘Bring it on,’ is Liverpool’s message heading into the final straight of 2018-19, Jordan Henderson insists.

The Reds go into tonight’s Anfield meeting with Watford one point clear at the top of the Premier League table with 11 games left to play, while the Champions League last-16 tie with Bayern Munich is finely poised ahead of next month’s second leg.

Henderson insists the squad are relishing the prospect of the challenges to come as they look to secure a successful end to the campaign.

He wrote in his column for the official matchday programme: “This game is absolutely massive, not just because it’s the next one but also because Watford are a fantastic team who are playing brilliant football this season. They’ll also come here full of confidence after an outstanding win away at Cardiff at the weekend.

“So, for the reason Watford will be positive and get at us, it means we’ll have to be ready for a proper battle. To be honest, as a team we love those sort of contests. As confident as Watford will be in their current situation, we are just as much on the front foot ourselves.

“We come into this having recorded three clean sheets in a row and if you look back to the earlier part of the season it was upon these foundations that we built our season. Knowing the team is so, so strong defensively is the perfect basis to work from going into games – and gives everyone confidence on the pitch. I know there will be focus on whether we are the same attacking and creative threat, but again, these questions were asked before and we’ve always found the answer.

“That’s the thing that gives us, as a team, the belief we need. We’re a team that time and time again finds an answer when the question is asked. And questions are asked because of the talent of our team and players, as well as where we are this season and what we’ve achieved.”

“I think bravery is an important theme at this time of the season, because it’s when the big things are decided at both ends of the table. The onus to be courageous is always on the team itself, because we’re the only ones in a position to actually produce. We’re the ones tasked with going out there and performing, so we have to show on the pitch during the 90-plus minutes the qualities we have.

“It’s great that our fans have that belief in us and along with our families, friends and colleagues that’s all we need really. Our travelling fans were magnificent at Old Trafford and I know tonight will be another occasion when they’ll play their part in making sure we have that extra bounce and spring when we need it. The atmosphere in the last two home games, against Bournemouth and Bayern Munich, was outstanding and I’m certain it’ll be the same again tonight.

“These are the moments when being close-knit as a club can be invaluable. The games will come thick and fast and every game will feel like a cup final. But find me someone who doesn’t want to be involved in cup finals? They’re the best occasions going. We have a chance to have that feeling every week from now until the end of the season.

“Personally speaking, although I know I can speak for every player in our dressing room when I say this, we’re absolutely loving it. It’s something we are embracing. ‘Bring it on’ is our mentality and that goes for tonight as much as in any game between now and the season finishing.”