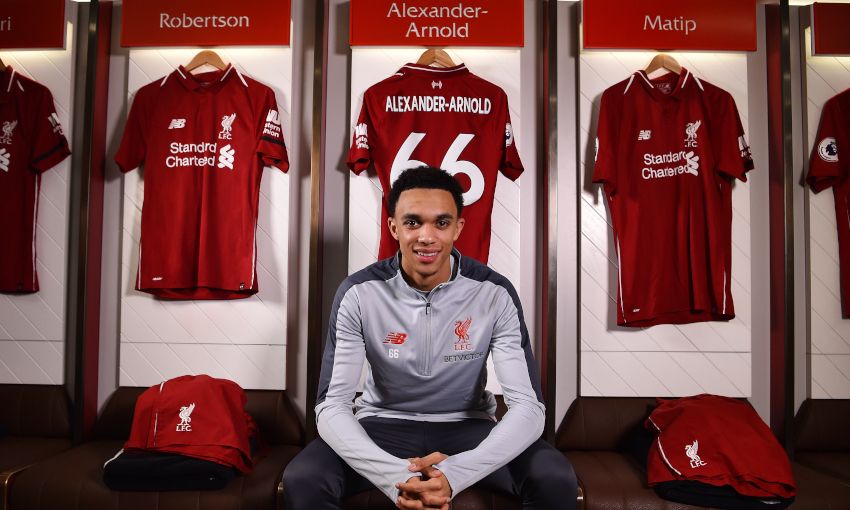 They are names that conjure vivid memories of glorious times gone by.

The lampposts that line the driveway on the approach to Liverpool’s Academy are adorned with banners bearing the images and feats of the likes of Steven Gerrard, Jamie Carragher, Robbie Fowler and Steve McManaman.

Some of Merseyside’s finest footballers, whose precocious talents were honed within the Reds’ youth system. Celebrated predecessors with careers that illustrate what is possible to the young men currently learning their craft in Kirkby.

One individual potentially en route to emulating such icons is Trent Alexander-Arnold: a Scouse Liverpudlian who joined the club he loves at the age of six and now, 14 years on, is living out his dreams in Jürgen Klopp’s first team.

By the time he turned 20 last October, Alexander-Arnold had made more than 50 senior appearances for the Reds. He played in last year’s Champions League final and World Cup while still a teenager and recently signed a new, long-term contract with Liverpool. 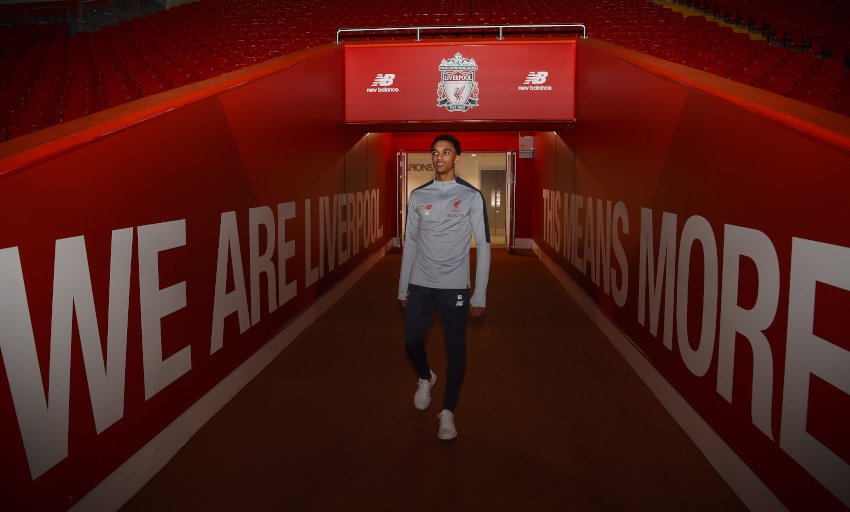 That’s not enough, however.

Exacting standards dictate that more is required if Alexander-Arnold is to be formally recognised at the place he spent his formative footballing years.

“I’ve said to Trent he can have a banner when… I think it might have been 100 games, I can’t remember now! Trent will know. He’s not getting a banner or a reference here until he plays a certain number of games. It might have been starting 50 games,” Academy director Alex Inglethorpe tells Liverpoolfc.com.

“He can get a bronze statue if he wins the Champions League! If he wins a medal with the club then he can have his name on the door or something, depending on what he wins and how well he plays in that particular final.

“I think there needs to be a grading system here, because if you look at the names that are around the place then what we try to do is respect the past but not live in it.

“I don’t want it to be that you get in the first team and play a few games and represent your country, I want you to win things. That’s what I want them to focus on. We don’t want to live in the past but do want to celebrate the fact there is a rich history of players that have played here who have come from the Merseyside area.

“I think if you want to get your name on here then you’ve got to do something. It’s not enough just to have a debut.

“Unfortunately, there’s no real reference here to boys that have played two games and then gone. That’s fantastic – to play for Liverpool Football Club is an unbelievable achievement and something I was a billion lightyears away from doing in my career, and I am not decrying the boys who have done that for one second – but I think there is another level that we should aspire to, which is those players who have played for the club and significantly shaped its history.

“I think it’s really important that our boys aim for that first. I am genuinely proud of the boys who have only made the one or two appearances but that’s not quite the same as putting them on the same level as a Steven Gerrard or a Jamie Carragher, and whether it’s Trent or Harry Wilson or Ryan Kent or whoever, that’s what they have to aspire to do.

“In my mind, Trent, and he’ll understand this if he reads or sees it, is not a first-team player yet. I think two seasons as a starter, then he’d be there. I think he’s also well aware of the pressure that he’s got to win things with the club, that’s the truth.

Alexander-Arnold’s journey is something of a fairy tale story, of course.

From venturing to Melwood from his nearby home to watch his boyhood idols train by peering through the training ground’s perimeter wall, to himself being revered by a new generation of like-minded youngsters in his city and beyond.

But, while labelling the West Derby native ‘a wonderful role model’, Inglethorpe descriptively explains why he is not held up as an archetype in terms of the Academy’s objectives.

“All boys are different and they’ll all present different challenges and they’ll have different pathways. Trent is a standalone person, I don’t need everybody to be like Trent because there’s only one of anyone and they’re all going to come through in slightly different ways,” he states.

“But he’s a wonderful role model for us: not only in how he plays and approaches the game, but he’s still very humble. He still comes back to the Academy, he’s still very respectful when he’s back here and everyone at the Academy is incredibly happy when we do see him again.

“He’s an unbelievable person. He’s humble and I think he still craves feedback, he still wants to get better and I don’t think he sees himself as complete by any measure.

“I’d be very surprised if he did at 20 years of age, but he still wants to improve and he’s still obsessive about getting better. I think he’s starting to learn what it takes to stay in a team and hopefully he progresses and continues to clock up the appearances, but at some point he’s going to have challenges, he’s going to have people challenging for his shirt and periods of his career where he’s going to have to fight and it’ll be exciting to see how he deals with all that.

“We’re his biggest fans here and we’ll remain that way.” 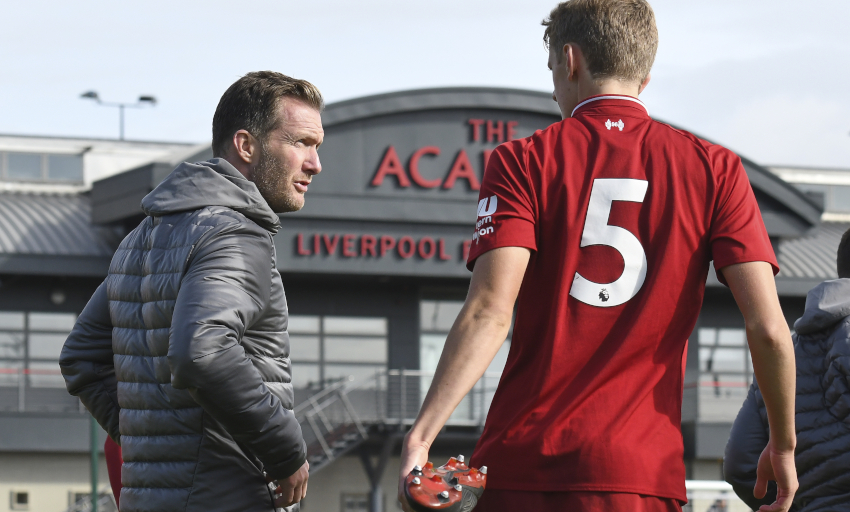 “Of course. Anybody would be a liar if they said they’d plotted his path,” begins the honest, considered response.

“All you can do is hope and probably for the first season [he was in the first team] I’d watch the game through my fingers, hoping that he survives. I remember watching the game against Manchester United [Alexander-Arnold’s full Premier League debut in January 2017] and thinking: ‘Don’t quit, please don’t quit, don’t give up.’

“I don’t watch him like that now. You can be more confident in his performance and his level of performance and his consistency, and now what you’re hoping for are the big moments: the goals, the assists, for his one-v-ones to be really good, for his aerial duels to be good.

“But no, I don’t think anyone would have predicted it.”

Inglethorpe’s role in laying the foundations upon which that progress has been built is significant.

“He was always nit-picking at everything,” Alexander-Arnold told this website last year.

“That pressure in training every single day built me into the player I am today. That was a huge thing for me. He moulded me into a man from a boy – I can only thank him for that.”

“I wasn’t aware that he’d said that,” Inglethorpe says after those sentiments, laced with gratitude and respect, are relayed to him.

“You’ve got an obligation to extract any potential that someone has. It’s your duty to try to get the most out of them and the Premier League is a really tough environment. It’s tough to play in front of 50, 60, 70,000 people each week. It’s not like a normal job, the demands are greater and you have to grow up a little bit earlier.

“If you want to play in the first team, on the one hand if you say as a young man, ‘I want my chance, I’m ready for senior football’, then on the other hand you have to accept that certain rules do apply. You have to be mentally very, very robust to do that.

“You have to be able to withstand pressure and if your first experience of that, of being tested and being put under some scrutiny, is with the first team, then we’ve done you a disservice. We’ve failed them, simple.

“I think we do have to demand excellence, and 100 per cent concentration and that they’re a bit obsessive about how they go about their work.

“And if Trent now sees the value of that, then that’s fantastic, it’s great. Hopefully he will, I’m sure, pass that on to other young players in time.” 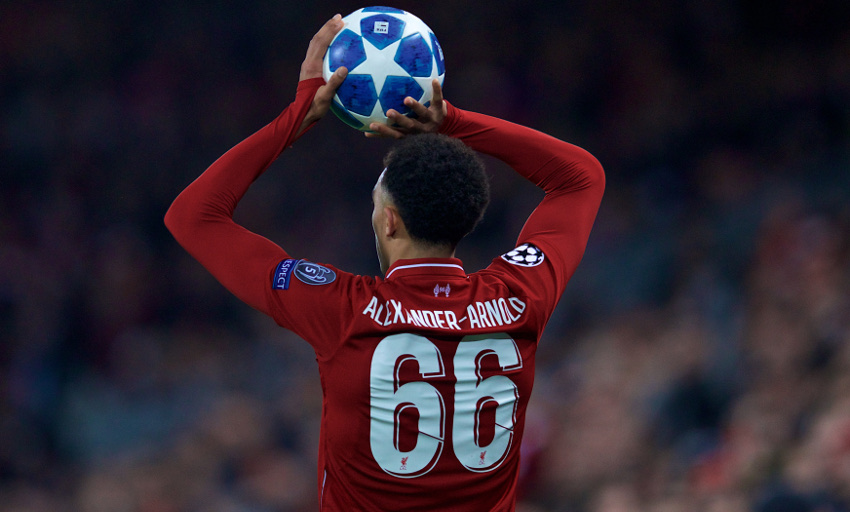 The elite standards that Inglethorpe subscribes to, helps implement and has encouraged Alexander-Arnold to meet, are, it’s put to him, only present at a handful of clubs around the world.

“I’ve said to Trent in the past that if he plays for 15 years, which is a long time to play, but if he starts his career at 19 and manages to avoid any big injuries and they don’t buy another right-back who is better than him and takes his shirt, then it’s 15 years at a top club.

“I think that’s what separates the boys that have come through the Academy in the past and achieved that, because in the attempts they’ve had to win something they’ve done it. And that would be the ambition of the club: to come out of it with medals, with landmark moments and that is what I would like all their careers here to be defined by, not by how many houses or cars they’ve got, but how many medals they’ve won and how many trophies they’ve got.

“I suppose ultimately, the ultimate accolade is whether the crowd sing your name when you’re gone – how you’re thought of by the crowd and whether they remember you or not.

“They’ll be the ultimate judges of whether you’re a legend here, not a banner at the Academy.”