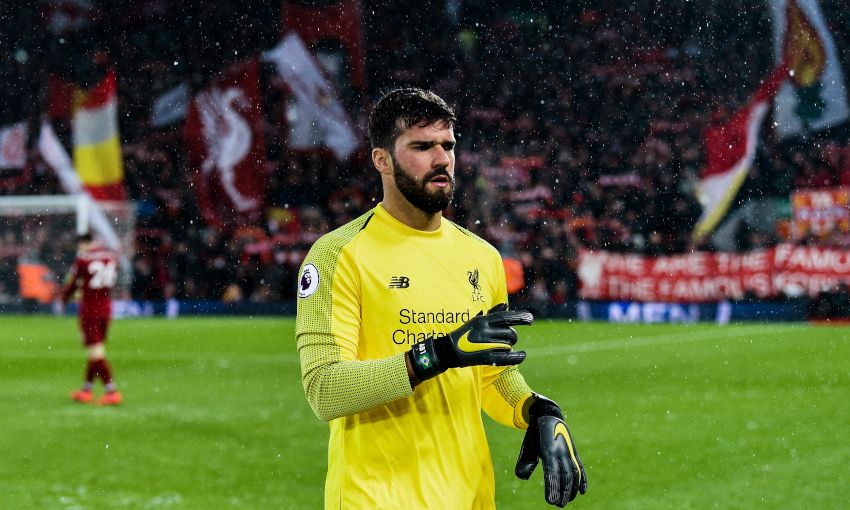 Alisson Becker has experienced the impact of the Anfield crowd from both sides – and believes the fans' contribution can make a significant difference during the run-in.

With a third of the Premier League campaign remaining, Liverpool are in the hunt for the title, level on points with Manchester City with a game in hand as it stands.

Their Champions League quest resumes next week, meanwhile, with Bayern Munich set to visit Anfield in the first leg of the sides’ last-16 showdown.

Alisson saw the power of the stadium when AS Roma were eliminated at the semi-final stage of the competition last term – and the atmosphere he witnessed influenced his decision to join the club himself.

“It’s difficult to play against Liverpool. The quality of the team is amazing. And then the 12th player, outside the pitch, that is the supporters,” said the goalkeeper.

“Last year, I can remember about the semi-finals that they played against us, it was difficult. It was an unbelievable atmosphere. It was incredible.

“I like to play with supporters of the other team shouting, talking to me, [it gives me incentive]. But here was something different.

“When I signed, when I wanted to come here and I knew about the interest of Liverpool, yes, for sure [that experience was a factor].

“We players, we want a team that wants you, a team with quality with a good manager and with great supporters. I think here at Liverpool you have maybe the biggest supporters in the world.”

Alisson chalked up a 14th clean sheet in 26 Premier League matches as Liverpool returned to winning ways against Bournemouth last time out.

It was an afternoon when the symbiotic relationship between players and supporters was at its most effective – and the Brazilian explained just how important it could be in the coming months.

He added: “We are excited about [battling for the title]. We are very focused on this. We are doing this for the supporters, for the manager, for us and for everyone who is inside the project.

“This team is different.

“The supporters are a great part of this team. They cannot go to the pitch and play but... they can do something to move us, to charge us to do something more on the pitch.”