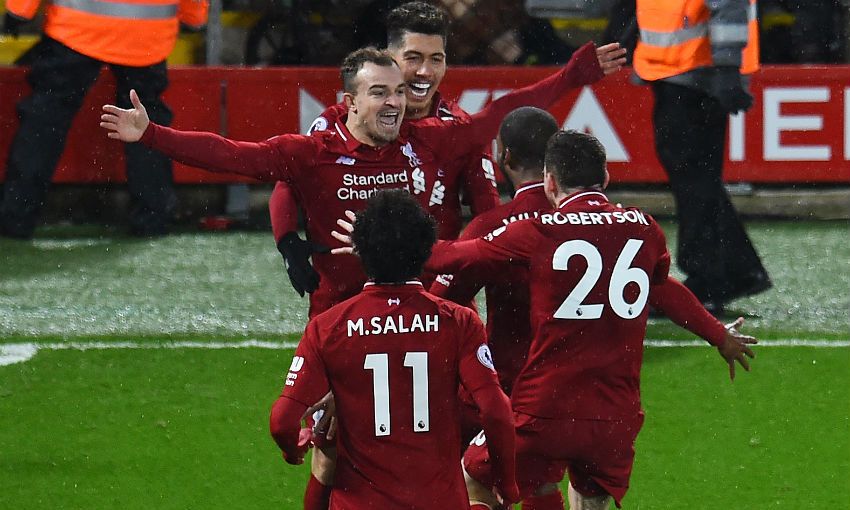 Andy Robertson has credited Xherdan Shaqiri for the speed with which the Swiss has adapted to life at Liverpool.

Shaqiri’s decisive contribution off the bench in Sunday’s win over Manchester United at Anfield, the No.23 scoring a quick-fire double to earn a 3-1 victory, took his goal tally for the season to five.

The 27-year-old has also registered three assists during his 17 appearances - nine of which have been starts - for the Reds, and Robertson has been impressed by his teammate’s performances following his transfer from Stoke City.

“He is seizing his chance and good on him… Shaq has hit the ground running - quicker than I did - so credit to him,” the left-back said.

“He has learned the way to play. He has been fantastic all season and a real threat for us and his stats this season are very good, so long may that continue.”

Robertson went on to note that the fact Shaqiri was among Jürgen Klopp’s substitutes against United is indicative of the strength in depth at the manager’s disposal.

The Scotland captain continued: “You look at the bench and there is probably a few people disappointed not to start, rightly so and we have all got positions to fight for and that is the beauty of having a good squad.

“Shaq comes on and shows everyone what he can do and scores the two goals and he will take the headlines but the other subs that came on... Hendo came on and shored up the midfield, won every tackle I think, and never lost a header against Fellaini, which is always tough.

“So these guys were disappointed not to play before kick-off but they come on and make such a difference for us. It was a real all-round performance.”

Roberto Firmino: December can be decisive>>