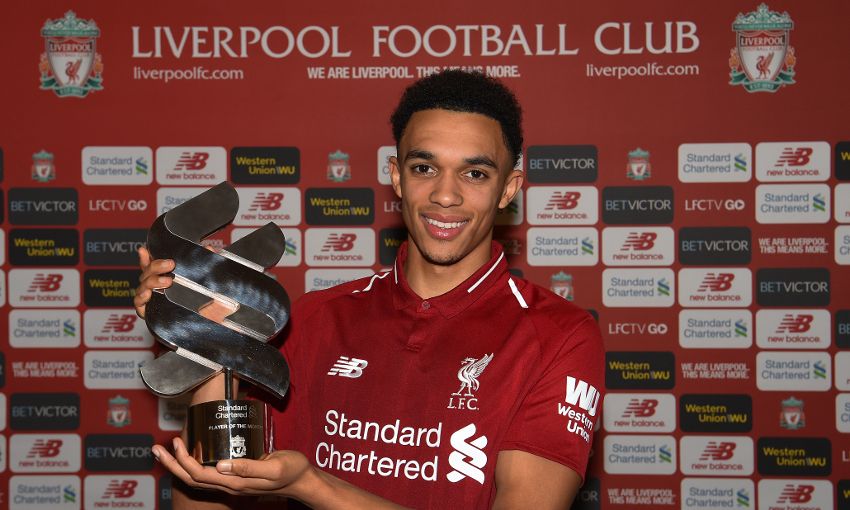 Trent Alexander-Arnold was today named as Liverpool's Standard Chartered Player of the Month for the first time in his career.

The 20-year-old scooped the accolade after supporters selected him as their star man for November in a poll on this website, seeing off competition from Xherdan Shaqiri, Mohamed Salah and Andy Robertson.

Alexander-Arnold made four appearances for the Reds during the month, during which he scored a stunning long-range free-kick in the 3-0 win over Watford at Vicarage Road.

The No.66 also claimed a vital assist when he provided the pass for Salah to open the scoring in a home victory against Fulham a fortnight earlier.

Upon receiving the award at Melwood, Alexander-Arnold told Liverpoolfc.com: “It’s massive. Getting awards from the fans means a lot more, to me especially. I’m thankful and grateful for the support they’ve given me so far. Hopefully there’ll be more to come.

“Especially when you’re in such a good team that is doing so well, it’s good to get the recognition, especially from the fans recognising good performances. It’s something to be very proud of and something I am really proud of.

“Hopefully there’ll be more chances and opportunities [to celebrate something] towards the end of the season and towards our big aims.”

Liverpool’s excellent form this season continued into December, including four wins out of four in all competitions so far this month.

Jürgen Klopp has had to lean on the depth of his squad to navigate a hectic run of fixtures in the Champions League and Premier League – in addition to several untimely injuries.

And Alexander-Arnold believes the attitude within the group is an important contributing factor to the Reds coping with setbacks and maintaining their challenge.

“In November we didn’t have all the results we wanted but [we have] that ability to bounce back and do well, and prove why we’re such a good team,” said the right-back.

“That’s what we’ve done throughout the whole season: bounce back from results that we were disappointed by and be able to win our next game. That shows signs of a really good, strong squad and team.

“It’s massive for any successful team to have a really good, in-depth squad. That’s something we’ve definitely got at the club now. It’s something we’re really happy with and something you need.