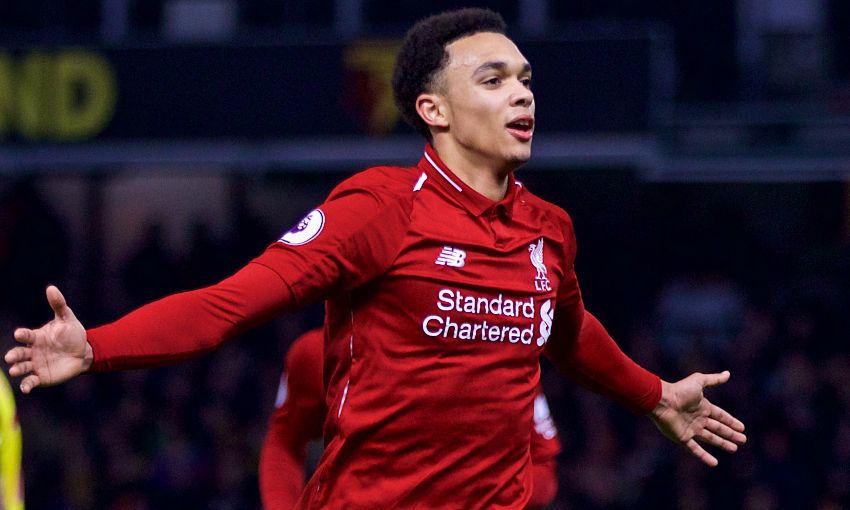 Trent Alexander-Arnold is hoping to earn his first ever start in a Merseyside derby on Sunday - and he's reiterated why Liverpool’s clashes with Everton have such a significant personal meaning to him.

The lifelong Red has made three senior appearances against the Blues to date, but is yet to be named in Jürgen Klopp’s XI from the off.

It's a stat that he will relish the opportunity to change this weekend, if given the chance.

“Every Liverpool lad grows up dreaming of playing in a Merseyside derby. It's something I've always wanted to do,” Alexander-Arnold told the Liverpool Echo.

“I've come off the bench in a few of them but never started. Hopefully I get that opportunity and we can get the win.

“This fixture always feel different to the rest. You can just feel it around the city. There's a bit more tension and more excitement as you build towards the weekend.

“Everyone wants to do well. You know what it means to the supporters. It's important for us to execute the game plan.”

He added: “For me, it's definitely still as important as it's ever been. When the fixtures are released the two games I look for straight away are Everton home and away.

“Just because they are the best fixtures for us. They mean so much to the fans. It's so close to home. They're special and I look forward to them the most. Growing up as a kid, I just remember us being successful in derbies - winning a lot of them and very rarely losing any.”

Liverpool will go into the 232nd Merseyside derby aiming to extend their unbeaten start to the Premier League in 2018-19.

The Reds sit two points behind league leaders Manchester City and Alexander-Arnold admits he takes satisfaction from the defensive development of the team, which has conceded just five times in 13 top-flight outings this season.

“Last season we probably played better than we are at the moment but we're still getting results,” he considered. “We've shown defensively that we're incredibly hard to break down.

“People are finding it tough to score against us. That sets the foundations for us. In most games we've found a way to score, whether that's from a set-piece or a tap-in or a 30-yard strike, it doesn't matter.

“We're finding different ways to win this season and that's something that the manager is really happy with. We're not winning games 5-4, we're getting 1-0 wins and keeping clean sheets and that feels just as good as winning 5-0.

“Man City are showing their quality week in, week out. It's going to be hard for someone to take the title off them, but in the Premier League anyone can beat anyone.

“We can't think about City, we just need to make sure we don't slip up in our games and keep the momentum going. Only later in the season will we really know what's a realistic target for us. We're not even halfway through the season yet. We just want to keep adding to our great start.”