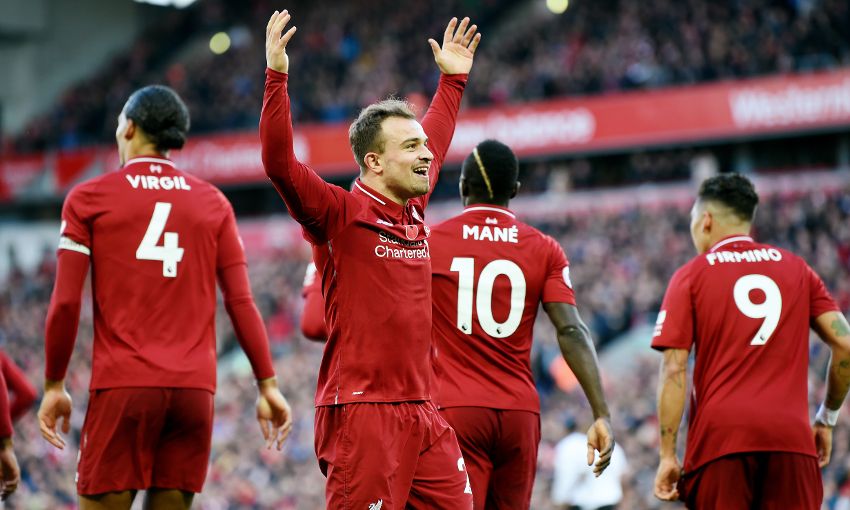 Xherdan Shaqiri wants to maintain a selfless approach to helping Liverpool achieve their ambitions this season.

The summer signing put Sunday’s Premier League clash with Fulham to bed when he carefully volleyed Andy Robertson’s cross home at the Kop end early in the second half.

His excellent strike doubled a lead previously established by Mohamed Salah and ensured the Reds extended their unbeaten run to 12 games and their points tally to 30.

“Very good cross… nice finish,” Shaqiri said of his effort before insisting the team comes ahead of any personal desire for finding the net.

“The [kind of] impact is not so important for me. I want to help the team,” the Switzerland international told Liverpoolfc.com after the game.

“When it’s with a goal or assist, it’s always good for the team. I came in the summer to help this team go forward and make the process better.

“I’m very happy with my performances, I just have to keep going like this and train hard every day. I hope we keep going until the end like this.”

That said, Shaqiri has scored or assisted in five of his last six Liverpool appearances.

The No.23, who was brought back into the starting XI after missing the midweek Champions League defeat by Red Star Belgrade, felt his side ultimately merited maximum points despite several first-half scares.

“It was important to make a good performance as a team after the defeat in the Champions League,” he said.

“We’re still unbeaten in the Premier League. It was a good performance, we scored two goals and didn’t concede; we were a little bit lucky but we didn’t concede. We just have to keep going like this.”

The final international break of the calendar year now forces a pause in that momentum, with a run of 11 matches in 40 days awaiting the Reds when they resume the campaign on November 24.

Shaqiri added: “Now it’s the international break, we wanted to win before that.

“Everybody can go to the national team and we hope everybody comes back healthy. That’s the most important thing. We just have to keep going and work hard. We are in a good way.”