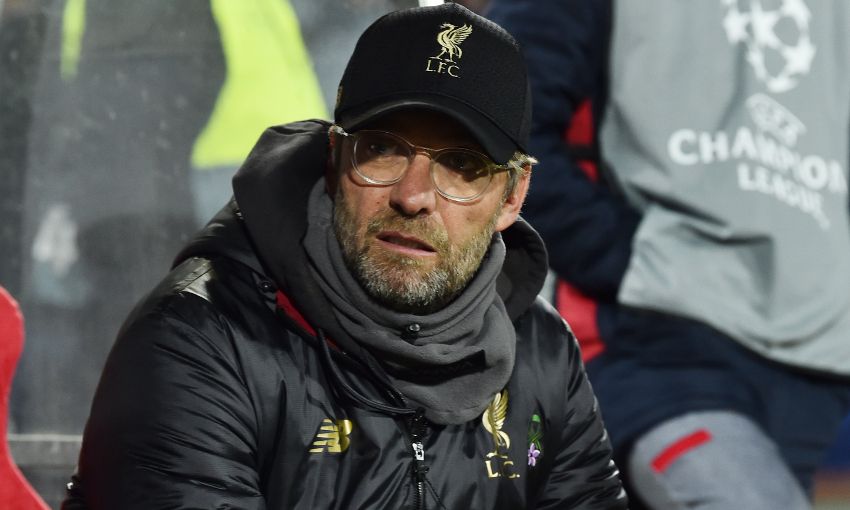 Jürgen Klopp wants everyone connected with Liverpool to show a positive reaction when Fulham come to Anfield on Sunday – but warned anyone who expects an easy game should stay at home.

The Reds are aiming to bounce back after suffering a 2-0 defeat to Red Star Belgrade in the Champions League in Serbia on Tuesday night and maintain their excellent unbeaten start to the Premier League season.

Fulham will journey to Merseyside at the foot of the table on goal difference and while many see Liverpool are clear favourites to collect the three points, Klopp doesn’t share such sentiments.

Asked during his pre-match press conference whether Sunday’s game could be an opportunity for his side to bolster their goal difference, the manager replied: “I would really be an idiot - a few people think I am, but not that much – to talk about any goal difference before the game.

“I’m not sure how many Fulham games you’ve watched over 90 minutes - not only Match of the Day or a summary of stuff like that - but this is a really strange situation for Fulham. I can really imagine how they feel in the moment – the football is good, a lot of things are really good, they caused [Manchester] City problems in the Carabao Cup… it’s been really good football in a lot of moments.

“We have to defend them. They are a skilled team offensively and tuned in doing a lot of things. The end product, the finishing was maybe not so good often enough but they’ve scored goals. On the other hand, they’ve conceded, but you will never score a goal against a team like Fulham with their quality only because you go into the game with the wrong attitude and think about scoring, scoring, scoring.

“This game is a big challenge, really, for all of us. We have to make sure we really don’t forget what kind of a good situation we are in.

“Atmosphere-wise, again another challenge, 12 o’clock [kick-off], so for all the people coming into the stadium, go to bed early on Saturday night, be in your best shape on lunchtime on Sunday and help.

“If someone goes there and expects an easy game then please stay at home because it will not be [easy], it will be a really tough job to do. It’s good we want to show a reaction, yes it makes sense, but the right reaction.”

Liverpool returned home from Belgrade immediately after the final whistle on Tuesday, meaning the players were back in training at Melwood on Wednesday.

It was before that session the post-match analysis meeting was held in which the performance against Red Star was dissected and discussed between backroom staff and players.

“There is only one real assessment that counts and it’s mine, which is why I don’t do it directly after a game,” Klopp continued, explaining why he elects to discuss performances the day after games. “We have all our emotions and stuff like that, frustration is not a good advisor or a good feeling for analysis in a meeting with players.

“It’s not that I feel better afterwards because I have said all the things I had in my mind in that moment. If I am angry, it doesn’t help. A full night and maybe a morning helps to see the things in the right way, at least in my understanding.

“During the week, if I think it is necessary and we have enough time then we can talk about different things, but usually after the meeting the day after the game, it is done then we prepare for the next one.”

One message reinforced during the meeting was how Liverpool’s start to the Premier League campaign should be viewed as positive.

Klopp said: “Now we have to see our situation. It is a very positive situation, the season so far point-wise in the Premier League is really successful but it doesn’t feel really like that for two reasons - the comparison with last year and the free-flowing football in a few games and Man City, Chelsea and a few others have played a very good season as well. That should not be a surprise for us and it isn’t.

“It looks and feels a bit like – and I feel it from all the questions I get asked around games - this season can only be a success if we become champion this year. In a year when our competitors are the champions of last year, the champions of two years ago, a refreshed Arsenal, a more experienced Tottenham – they’ve struggled line-up wise, but have a similar number of points to what we have -  and Man United and all that stuff. It’s a really tough job but we have no problem with that.

“We go for everything, we have to build on our situation, to get better, to build more confidence. It’s all OK, but this game on Tuesday was, of course, a massive knock which was not expected. So now we have to react for us in the right way - but not only on Sunday, in general.”