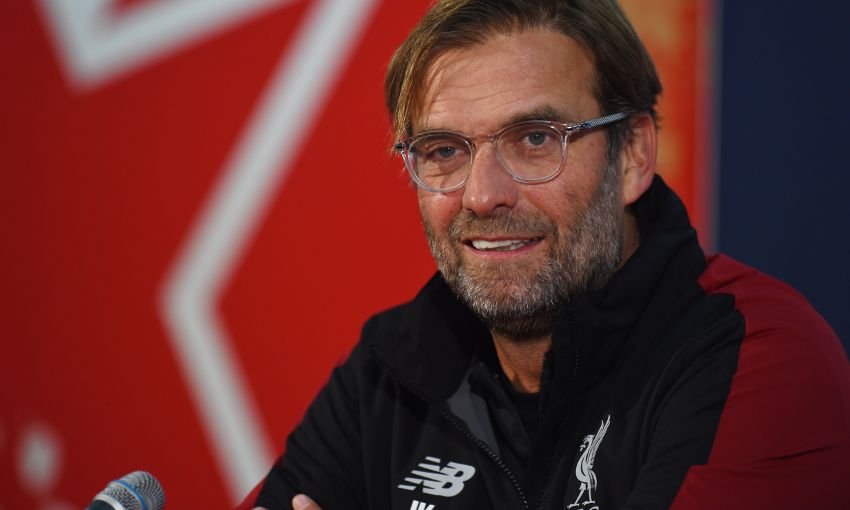 Jürgen Klopp is certain Liverpool are well-equipped to handle the atmosphere awaiting them at Red Star Belgrade on Tuesday night.

The 53,000-capacity Rajko Mitic Stadium is the venue for the Reds’ meeting with the Serbian title-holders in Champions League Group C.

Klopp, his staff and the players flew to Belgrade from John Lennon Airport on Monday afternoon and, soon after arriving, the manager spoke to the media inside the stadium.

A key topic on the agenda was the prospect of a partisan home crowd and the influence Red Star’s supporters can have on both teams.

Asked what the biggest challenge will be for his side, Klopp replied: “The combination of atmosphere and football they play.

“Atmosphere… we are from Liverpool so we know how big the influence can be. The only way I know to cool the atmosphere down is playing really good football. That’s what we have to try; to be ready for a fight and ready for a big game.

“We will be ready, that’s the only thing I can make sure of. Then the boys have to do the job on the pitch, of course.

“We are not the most experienced team in the world in this part of the game but in the last three years we had two years with long, long journeys. We were twice in a final; that means we are really used to difficult atmospheres and difficult situations.

“That’s what we have to be again tomorrow and then let’s do what we are best in – playing football – and try to win the game.”

Liverpool top the group at its halfway point, having beaten Paris Saint-Germain and Red Star at home either side of an away defeat at Napoli.

With return games against PSG and Napoli to follow this tie, Klopp was quizzed on whether three points are imperative for the Reds in Belgrade.

“That’s how everybody from outside sees it but, for me, it’s not that we have no chance to get points from the other two games,” he said.

“We play in Paris, which is obviously not an easy place to go, and then we play at home against Napoli. It’s not that tomorrow is our only chance; I don’t think you should go into a game like this and put an extra amount of pressure on your shoulders – ‘if we don’t win today we have no chance.’

“For football it’s always important that you can enjoy the challenge as well. Tomorrow will be a fantastic atmosphere.

“When you describe it, always it sounds like something we have to be afraid of. But, for me, actually one big reason why I really enjoy being a manager of such a big club is because we have big atmospheres really often. I like that.

“The people want to support their team, that’s perfect, and we have to make sure we are ready for that.

“I don’t feel tomorrow is the only opportunity for us to get three points [in the remaining group games]. It’s an opportunity; not more, not less – and we will try everything.”