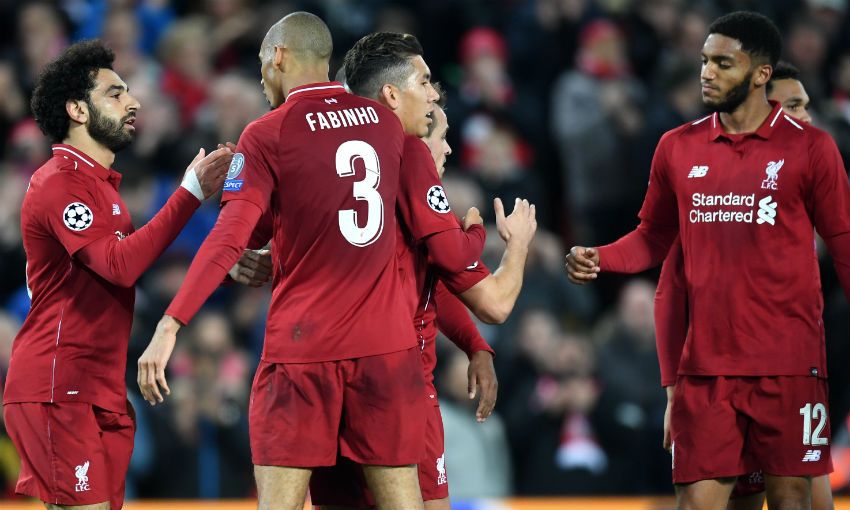 Joe Gomez was delighted to see Liverpool playing their renowned brand of 'fluid football' as Red Star Belgrade were dispatched 4-0 in the Champions League at Anfield on Wednesday night.

The Reds returned to the top of Group C with the victory thanks to goals from Roberto Firmino, Mohamed Salah (two) and Sadio Mane.

The hosts had to be patient, however, as their opponents looked to stifle their early attacking forays, but the breakthrough after 20 minutes signalled the start of their control of the contest.

Gomez told Liverpoolfc.com: “It’s always nice to get a solid result with some good goals and a clean sheet obviously as well.

“It was important that we got some more points on the board for the group and we’ve just got to continue it now and keep making steps. Clean sheets are important, and it was nice to get another one.

“We knew at times we’d have a lot of possession and would have to try to break them down. It’s about being patient at the same time, not getting bored of passing and [the manager] made sure that he emphasised that to us.

“It was good when we got the first goal, it gets a bit more fluid and that’s what we’re capable of as a team. We’ve got so many talented players on the ball and if you give them the chance to play, things will happen.”

The success over Red Star was the first time this season Firmino, Salah and Mane had all found themselves on the scoresheet in the same game.

Liverpool’s attacking threat continued to grow over the course of the evening, and Gomez added: “Obviously we had a couple of pens but the team goals, the one and two-touch football in behind, that’s probably what we’re known for and our front players are so good at creating those opportunities and space on the ball. It’s nice to see us playing fluid football.”

Salah’s double took him to 50 goals for Liverpool in just 65 appearances – the fastest player in the club’s history to reach the half-century mark.

“That’s unbelievable,” Gomez remarked. “50 goals… I’m trying to get my first one!

“It’s special, Mo’s a special player. It just showed that he carries on, he’s relentless with his pursuit for goals and that’s what makes him a top player and hopefully he continues.”

Paris Saint-Germain’s 2-2 draw with Napoli in France means Liverpool hold a one-point advantage at the top of Group C after three games.

A return meeting with Red Star in Belgrade is next up for the Reds in the Champions League at the start of November.