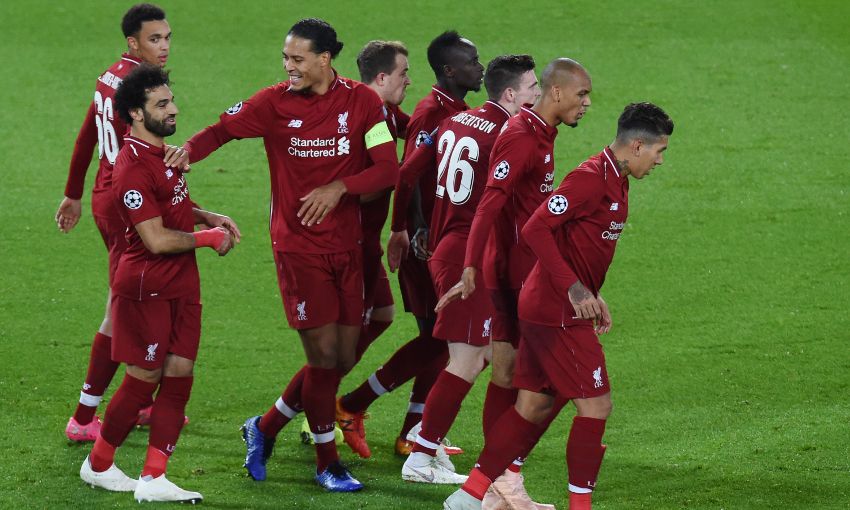 Liverpool returned to the top of Champions League Group C after a 4-0 win over Red Star Belgrade at Anfield on Wednesday night.

Roberto Firmino made the breakthrough when he fired home from Andy Robertson’s low cross inside the opening 20 minutes before Mohamed Salah grabbed the second on the stroke of half-time.

Salah then converted from the penalty spot in the early stages of the second half to claim his 50th goal for the Reds in just his 65th appearance.

Sadio Mane had another spot-kick pushed onto the crossbar, but quickly made amends by stabbing in a fourth moments later to seal the win - a result which puts Liverpool back in top spot in the group after Paris Saint-Germain and Napoli played out a 2-2 draw in France.

Liverpool made five changes to their line-up from the team deployed at Huddersfield Town on Saturday.

Mane was deemed fit to start after a hand injury ruled him out of the journey to the John Smith’s Stadium, while Fabinho, Firmino, Georginio Wijnaldum and Trent Alexander-Arnold also returned.

Liverpool got the game under way aiming to bolster their prospects of qualification from Group C having followed up the spectacular win over Paris Saint-Germain with a disappointing defeat by Napoli on matchday two.

With 10 minutes gone, the first chance of the evening arrived as Salah brilliantly controlled Xherdan Shaqiri’s hoisted pass over the top and attempted to round Milan Borjan, but the goalkeeper managed to claw the ball away from the boots of the Egyptian with a sprawl.

At the other end, Lorenzo Ebecilio’s corner reached Srdan Babic in the centre, who hooked well over the crossbar as Red Star fired a warning shot at their opponents.

However, the breakthrough arrived for the hosts on 20 minutes. Shaqiri’s deft ball into the left channel set Robertson racing clear towards the touchline. The Scot drilled the ball into the middle, where Firmino took a touch before hammering into the back of the net via a slight deflection.

Robertson was an inch away from another assist when his cross was just a fraction too far in front of the head of Salah, while Shaqiri curled straight into the arms of Borjan.

Liverpool’s marauding left-back was involved in the final third again soon after, but this time sliced wide of the near post after being played into space by Mane.

Then, in the final minute of the half, the Reds grabbed their second of the evening. Shaqiri expertly cushioned Fabinho’s ball forward into the path of Salah on the edge of the area. The No.11 took a touch before emphatically drilling home via his right boot.

Liverpool didn’t have to wait long to further their advantage following the re-start; the hosts were awarded a penalty when Mane was halted by Filip Stojkovic inside the box.

Salah assumed responsibility – and duly blasted in the Reds’ third of the night, reaching the half-century mark for the club in the process.

With a commanding lead, the home team were in full control of the contest by this stage; however, El Fardou Ben Nabouhane wasn’t too far away from sliding in a low ball across the face of Alisson Becker’s goal midway through the half.

Adam Lallana and Daniel Sturridge took the places of Shaqiri and Salah as the game entered its final straight – and Liverpool were awarded a second penalty on 76 minutes when a free-kick into the Red Star area was handled.

With Salah off the field, Mane stepped up only to have his powerful effort pushed onto the underside of the bar by a fine stop from Borjan.

However, the No.10 wasn’t to be denied a goal and he atoned for his miss by sliding in the Reds' fourth after being teed up by Sturridge to cap a good night’s work for Jürgen Klopp’s men.