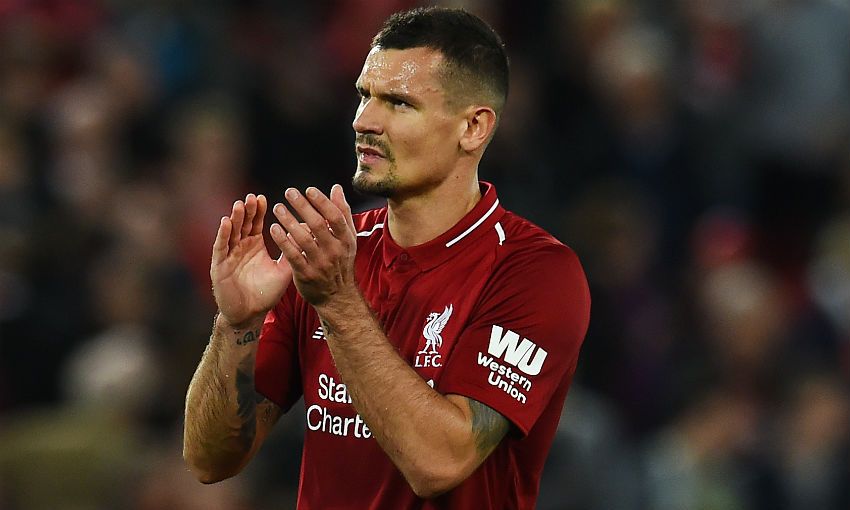 Dejan Lovren is targeting a rapid return to 100 per cent fitness after making his first appearance of the season for Liverpool on Wednesday.

The centre-back made his comeback following a pelvic injury by starting the Reds’ 2-1 defeat to Chelsea in the third round of the Carabao Cup at Anfield.

The match marked Lovren’s first outing since the World Cup final in July and, while it ended in a disappointing result, the Croatia international is hopeful of building on a valuable 90-minute run-out as he works his way back to peak condition.

“After this injury that I had it’s good to be back with the team and to have a couple of minutes or all the minutes on the pitch,” the No.6 told Liverpoolfc.com.

“I’m quite happy, so hopefully I can be much, much fitter in the next couple of games. I carried it [the injury] for a long time, to be honest, and hopefully it’s everything behind me so I can be 100 per cent again.”

Goals by Emerson and Eden Hazard completed a late turnaround for Chelsea after Daniel Sturridge had acrobatically put Liverpool ahead on the hour mark of Wednesday’s tie.

The Reds carved out a number of opportunities throughout the contest but were not at their clinical best, leaving the door ajar for Maurizio Sarri’s team to mount a fightback.

Lovren continued: “Obviously we had the game in our control. We scored and we played quite well, we had also a couple of big chances but we weren’t deadly enough today like these previous games.

“And then in the last 10 minutes they came back and unfortunately they scored a second goal and then we couldn’t come back again.”

Jürgen Klopp’s side have a chance to exorcise their frustrations quickly, though, when they travel to Stamford Bridge in the Premier League on Saturday.

A weekend win over the Blues would ensure Liverpool remain top of the table by virtue of recording seven successive victories at the start of the top-flight season, and Lovren is anticipating an improved performance in west London.

“Maybe this is tonight like a warm-up for Saturday and so we know what we need to do better,” he said.

“When you look altogether, it’s the first time that we played like that, [there were] a lot of changes and it was looking quite well, until of course they scored a second goal… but we will take it.

“On Saturday we have a big game against them and we will improve, definitely. I’m confident that we will do much, much better.”