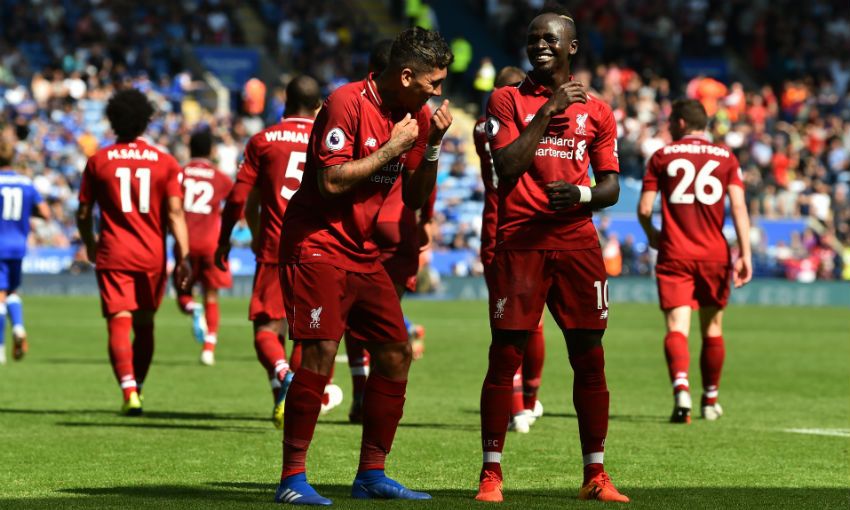 Liverpool maintained their 100 per cent start to the season with a hard-fought 2-1 victory over Leicester City at the King Power Stadium on Saturday.

Sadio Mane opened the scoring with 10 minutes on the clock when he finished powerfully from inside the area to set the Reds on their way.

Roberto Firmino doubled the lead on the stroke of half-time, heading in from a James Milner corner – his first goal of 2018-19.

However, Leicester pulled one back when Alisson Becker was dispossessed by Kelechi Iheanacho, who squared for Rachid Ghezzal to convert.

The Foxes pressed in search of a leveller, but the Reds held out to secure the three points and make it four wins from four.

After naming the same starting XI for each of their three opening Premier League matches of 2018-19, Liverpool made one change at the King Power Stadium as Jordan Henderson returned in place of Naby Keita, who was on the bench.

With the aim of maintaining an unblemished start to the campaign in the final fixture before the international break, Liverpool began with assertion at the King Power Stadium – and they should have been in front with four minutes played.

Mohamed Salah’s intelligent ‘around the corner’ pass into Firmino enabled the No.9 to step inside Leicester’s two centre-backs and drill towards goal. Kasper Schmeichel managed to block, but the rebound broke for Salah; however, his first-time swipe towards goal went the wrong side of the post.

Nevertheless, they did not have to wait too much longer to nudge themselves ahead.

Andy Robertson did well to ride a challenge from Ricardo Pereira before squaring to Mane, who bundled his way beyond Wes Morgan with a ricochet and stabbed beyond Schmeichel from close range.

The Reds were in control and only a last-ditch block from Morgan denied Georginio Wijnaldum a second after the visitors had opened up their hosts once more soon after.

That said, Jürgen Klopp’s side did require a smart stop from Alisson to thwart Demarai Gray after the Leicester forward found space for a strike in the box – a chance which signalled the start of a spell of pressure from Claude Puel’s men.

With half-time approaching, Salah escaped the attentions of Ben Chilwell and tried to curl the ball into the bottom corner from 20 yards out. It needed Schmeichel at full stretch to turn it around the base of the post.

But after the Foxes had defended the first corner by diverting behind their own goal, the follow-up saw Firmino find space to plant a firm header into the corner to double Liverpool’s lead.

Leicester re-started in sprightly fashion – and James Maddison was left clutching his head in his hands after a stunning last-gasp challenge from Joe Gomez denied him what appeared to be an almost certain goal six minutes in.

Soon after, Morgan couldn’t adjust his feet quickly enough to turn in a dangerous ball across Liverpool’s six-yard box following a short corner.

The hosts did reduce the deficit just after the hour mark when Alisson was caught in possession by substitute Iheanacho, who squared for Ghezzal to slam in.

With pressure mounting, the Reds sent on Xherdan Shaqiri and Keita in place of Salah and Henderson.

Leicester continued to press, making for a tense final quarter, but Liverpool saw it through to clinch three points and keep up their perfect start to the new campaign.