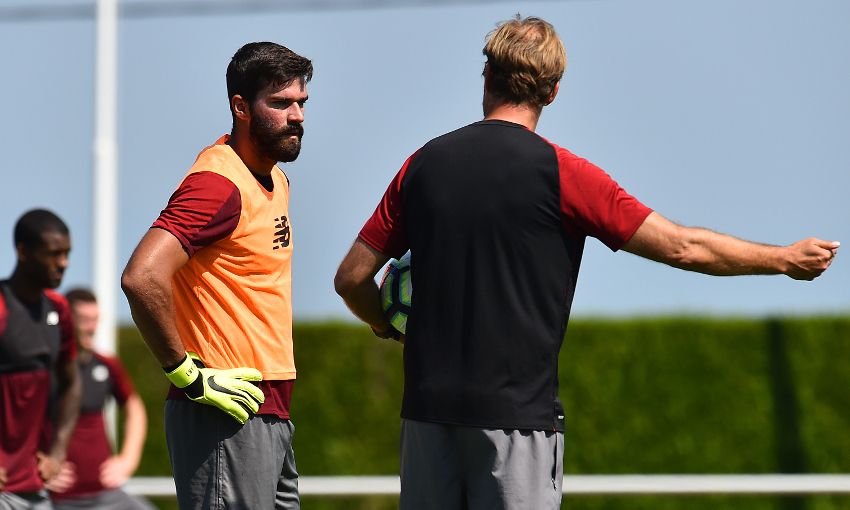 Liverpool have been using specific training exercises to prepare goalkeeper Alisson Becker for the new challenges of the Premier League.

The tackle bags previously seen in use at Melwood have been deployed again by goalkeeping coach John Achterberg to help the Brazil international acclimatise to the kind of dangers he is likely to face during his debut season in England.

Set-pieces have also been a focus for Alisson since he joined the club from AS Roma, though Jürgen Klopp believes only minor, rather than major, adjustments are needed.

“It is not rugby, it is goalkeeper training,” explained the Reds manager.

“When Loris [Karius] came he did it and, of course, Alisson is doing it as well. It is normal goalkeeper training. It makes sense to do it because the six-yard area is not a safety box for a goalkeeper.

“We have these situations in training constantly when we do set-pieces and the box is full with 22 players. Maybe 22 is a bit much, but certainly 15.

“It is busy, we do it often so that the goalkeeper gets used to that. It is all about timing. We will see how that is, but first of all we brought him here because of the things that he is already good at.”

The manager added: “It is not that the goalkeeper has to change completely for this league. We have to help him too in situations.

“There is not just one player responsible for something – we have to have the right formation around set-pieces. It is not solely about Alisson, but the whole team.”