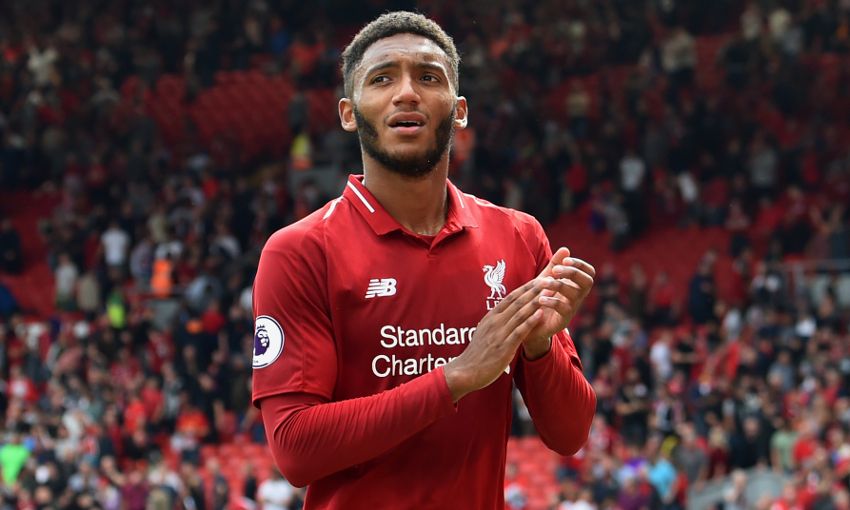 The talk of increased competition for places in the Liverpool team has arguably been summed up best by Joe Gomez: 'You have to treat each game like it's your last.'

The defender secured a spot in Jürgen Klopp’s first XI of the season last Sunday as the Reds kicked off their Premier League campaign with a 4-0 home win against West Ham United.

Having hitherto been used primarily at full-back during his three years at the club, the No.12 was deployed alongside Virgil van Dijk at centre-half for the match and turned in an assured performance.

With Ragnar Klavan, Dejan Lovren and Joel Matip nursing injuries of various kinds, there is an opportunity for Gomez to stake a firm claim for the position in the long-term.

Indeed, in praising the 21-year-old after the game, James Milner said the meritocracy in place within the squad means ‘someone has got to take that shirt off him’ now.

“Probably within the team it’s going to be that way a lot of the time this year. There’s a lot of strength in depth and everyone knows rotation is possible at any point in time,” Gomez told Liverpoolfc.com when the suggestion was put to him.

“You have to treat each game like it’s your last – because there’s always going to be someone working hard and ready to slot back in. It’s healthy and good, it’s part of being at a club like this.

“It can only give us more strength this year; there were times last season where we struggled and had to adapt quite a bit in a positional sense. That’s how we’ve all got to see it and I’ve got to see it like that as well.”

Watch: Gomez on battle for places and Van Dijk

Switching from the side of the defence to the centre always felt like a case of when and not if for the England international, who has been open about his ambition to move into the middle ever since he signed for Liverpool in the summer of 2015.

But his appearances at full-back were not a case of biding time or treading water. They were real-time lessons for his alternative position.

“It’s somewhere I want to develop going forward. It was nice to get a positive result as well. I enjoy it. I know I can continue to learn and develop, and hopefully get more time there going forward,” continued Gomez.

“I got some decent exposure there in pre-season so that helped me in terms of transitioning back in there.

“Playing at full-back gives you insight into what you want your centre-half to do, position-wise. I wouldn’t say I totally switched off from it but pre-season did help in terms of bedding back in and getting used to it.

“I know which ball the full-back doesn’t want sometimes! You can give them a square pass and it’s not the best to deal with. It does help.

“And obviously we all communicate with one another and that makes it easier. We have played quite a few games. I know Trent [Alexander-Arnold] well and we all know each other well, what each other’s strengths are. You can use that to your advantage.”

The Reds extended their run of consecutive clean sheets in league games at Anfield to six by keeping the Hammers at bay last weekend.

Van Dijk started each of those half-dozen fixtures following his January transfer from Southampton, exuding a calm authority from his area of the pitch.

So, is he really as cool as he looks?

“He is very chilled – but assertive. He is obviously a dominant presence, everyone can see that,” explained Gomez with a nod.

“It’s nice to play alongside him and we get along well, on the pitch we communicate. And it helps – it’s one of the key things.

Liverpool’s winning start to the Premier League season was matched by four of their closest rivals, with Chelsea, Manchester City, Manchester United and Tottenham Hotspur also victorious across the opening round of matches.

Gomez affirmed it is ‘too early’ to attach importance to results elsewhere in the division – “I don’t think they’ll be looking at it either” – but the defender does feel the Reds have shown they are primed to pick up the baton from last term and get running towards their goals.

“The fundamentals are there, and the foundations that the gaffer wants us to use,” he said.

“We continued that, it’s just about gelling again and getting the rhythm back. It was good we could start that on Sunday but now it’s about continuing that and trying to build on it.”