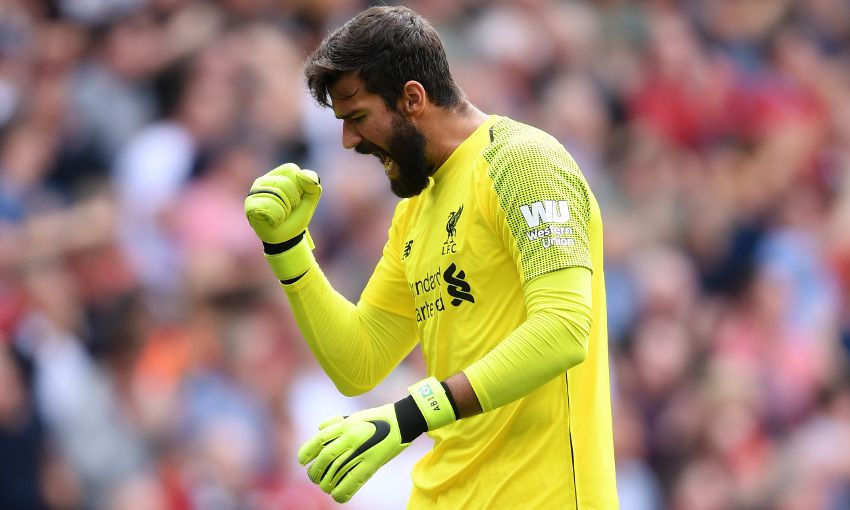 After Liverpool chalked up their first clean sheet of the season at the first attempt, Virgil van Dijk opened up on the encouraging combinations he has formed with Alisson Becker and Joe Gomez.

The Reds were rarely under serious threat against West Ham United at Anfield on Sunday, easing to a 4-0 Premier League win once Mohamed Salah broke the deadlock in the 19th minute.

The visitors registered only two shots on target as Alisson made his competitive debut for the club and helped extend an impressive defensive run on home soil.

Jürgen Klopp’s side have not conceded a goal in any of their past six Anfield league matches.

That streak continued despite a reshuffle; Joe Gomez switched from full-back to the centre in the absence of the injured Ragnar Klavan, Dejan Lovren and Joel Matip.

But Van Dijk alongside him had no doubts about the No.12’s capabilities.

“I was not really worried, to be fair,” said the Netherlands international.

“I’ve played a couple of games in pre-season with Joe at centre-back and I have a very good relationship with him, a very good understanding outside of the pitch as well.

“We need everyone in the squad.”

On Alisson, he said: “We speak a lot. He’s very vocal and that helps. It helps me and everyone in the backline. I think his presence is very good as well.

“He has a lot of qualities on the ball that help us playing. We’ve worked on [our relationship] the whole pre-season and we’ll keep practising. There’s still a lot to do.

“It’s just one game. We had a good pre-season with good results and games where we’ve played very well.

“But we can do a lot better and it’s just the start. I think the key is we need to be very consistent and do it every game.”