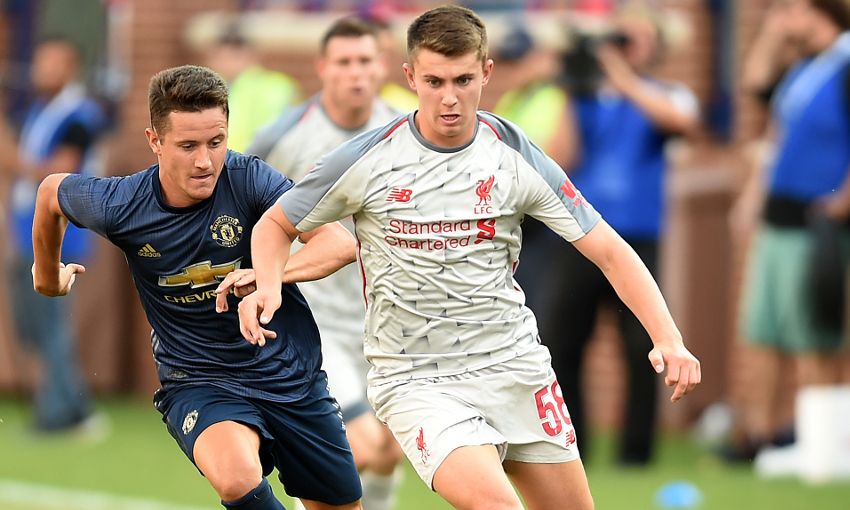 Now is the right time for Ben Woodburn to spend a season away from Liverpool on loan, Jürgen Klopp explained after confirmation of the forward's move to Sheffield United.

The 18-year-old will spend the duration of the forthcoming campaign with the Championship side, who kick off against Swansea City on Saturday evening.

Though first-team opportunities were limited last term for Woodburn, the Reds’ youngest ever goalscorer, Klopp resisted the temptation to send the Wales international out on loan.

But the timing and the destination are now ideal, according to the manager.

“Both sides will benefit a lot, I think,” Klopp told Liverpoolfc.com at the training camp in Evian.

“I’ve known Ben pretty much since I came in, or not long after. It was more or less Pep Lijnders’ first proposal, he said: ‘This guy at the Academy, you need to have a look.’

“From the first day I was really impressed. Then he had all the highs you can have in that age group and a few of the downs as well. That’s completely normal.

“Last year was a really long year for him: constantly training with us and then always going to the Academy. He loves football and he loves playing for the U23s or in the UEFA Youth League. But, of course, it’s a really long kind of two years not having a real team.

“So I’m really happy for him that he has that now and the best news is he’s playing for Sheffield United.

“The start of pre-season was hard for him, like all the others – heavy legs and all that stuff – but for two weeks he has been in fantastic shape and is the Ben Woodburn we knew from the first day, only a little bit grown up. That’s now a really good moment.

“But it’s good for him to learn and whatever happens, he is our boy so there is no pressure for him. He can only enjoy himself in this situation, work hard, get new experiences and come back stronger. Then we will see.”

Similar loan moves are likely to be arranged for more of the younger members of Klopp’s squad, which will be further bolstered by the returns of Jordan Henderson, Dejan Lovren and Simon Mignolet in the coming days.

Sheyi Ojo, for example, is another player set to benefit from a temporary switch, with the club’s recruitment department working diligently with the best interests of all parties in mind.

Asked about further possible outgoings and whether he would like them to be completed by the English transfer deadline of August 9, the boss said: “That’s actually not my decision, we will see. I would take them all if I was at another club, to be honest!

“Here it is a little bit difficult, especially for the offensive players. Ojo played a fantastic pre-season, really good and confident technically anyway, really strong, improved a lot in tactical things and his attitude was great.

“For me, he is a no-brainer, to be honest, and I think that will happen. It makes sense for him to go on loan. That’s how it is for a few of the others.

“It’s not that we can decide that [the timing]. Yes, I wish I had the final squad four weeks ago, all together. But that’s a business, we have to wait.

“Michael Edwards and his full department are working hard on that. We will see when we have the final squad but for me, the final squad will be together on August 6 when Dejan is finally back, plus Hendo the day before and Simon.

“Whatever will happen afterwards is only on the outgoing side. We will see. At one point, August 9, we will make a decision and we have to work with the players we really want to have in the squad. That’s how it is for everyone.”